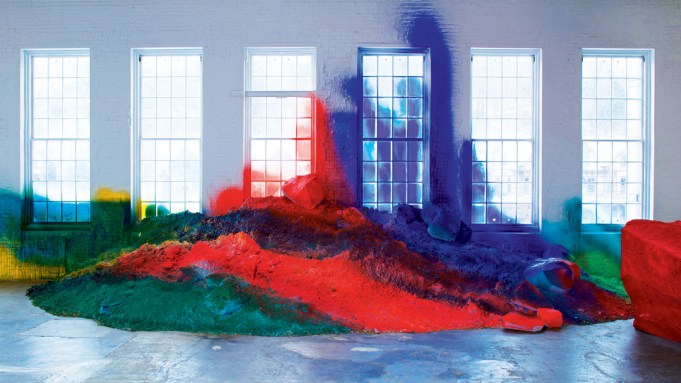 Many Europeans think of America in terms of vast landscapes and infinite sky, and urban centers packed with towering buildings and teeming masses, all in a rather precarious state of flux. The sprawling and spectacular site-specific exhibition by German artist Katharina Grosse at MASS MoCA, “One Floor Up More Highly,” seems to reflect this view. Organized by the museum’s curator Susan Cross, the show could be seen as an homage to an idealized if not wholly fictional place, such as the American frontier. But it soon proves to be a multifaceted installation, inviting myriad interpretations.

This project, like most of Grosse’s large-scale installations, incorporates massive sculptural features that
allude simultaneously to empirical space and an imaginative vista. Yet the artist’s primary means of expression is painting, and the thrust of the work is rigorously abstract. She employs painting’s illusionistic devices of light and shadow, and, with a subtle manipulation of other elements, suggests complex narratives. Over the past decade, she has developed a unique working method and a singular approach to painting that has taken the medium far beyond its traditional domain.

Grosse typically designs intricate but ramshackle constructions using mounds of dirt, found objects and fabricated abstract shapes in wood, Styrofoam or plastic. Once the tableau is in place, she dons protective gear that resembles a hazmat suit and wields an industrial spray gun. She moves through the environment—usually on foot, but sometimes on scaffolding or suspended from a crane—covering almost everything in her path with brilliant, saturated color. Occasionally, she coats the gallery’s furniture, walls, windows and ceiling, incorporating the architecture into the art.

Grosse’s rather novel practice has been compared to graffiti and street art.[pq]Exploring and exploding preconceptions of what painting is and what it could be, Katharina Grosse lends a Romantic vision and a super-human scale to her most ambitious U.S. exhibition.[/pq]More convincingly, she commingles the diverse tactics of artists such as Robert Smithson (in his earthworks) and Jules Olitski (in his misty Color Field canvases) to create something startlingly new. A large part of her practice is performative, albeit without much of an audience. Since she uses a compressor to keep the paint moving, she must act quickly and deliberately to complete the work. Unlike the Action Painters or Expressionists, with their convulsive brushwork and gestures, Grosse never comes into direct contact with the surfaces. Her physical if not psychological detachment seems related to Conceptual art. However, her technique involves a machismo stance, with aggression modified by a kind of opulent sensuality.

Born in Freiburg/Breisgau in 1961, Grosse studied with Gotthard Graubner at the Kunstakademie Düsseldorf. Works by Gerhard Richter and Nam June Paik were early influences. She currently teaches at the Kunstakademie, even though several years ago she relocated to Berlin. She now lives and works much of the time in a striking Bauhaus-style home and studio in Berlin’s old city center that she commissioned from architects Ute Frank and Georg Augustin.

Her early paintings, from the late 1980s and early ’90s, are spare gestural compositions that at times recall Mark Rothko’s work or, more closely, the Zenlike, brushy late abstractions of Hans Hartung. Attracted to shaped canvases and unconventional materials, Grosse experimented with unusual painting supports ranging from found objects to a lightweight resin material used for surfboards. In some sense her work is akin to postwar movements such as the French Supports/Surfaces, in its approach to abstract-painting-as-object, as well as Arte Povera, in its use of abject materials.

Grosse’s art blossomed and her career took off when, in 1998, she began adding passages of spray paint onto canvases and directly onto gallery walls. Growing increasingly bold and elaborate over the past decade, Grosse’s large-scale installations, which she has been invited to produce in many parts of the world, have brought her significant notice. Her first in the U.S., at the Hammer Museum in Los Angeles, in 2001, was widely praised in the art press, as were subsequent exhibitions at the Contemporary Arts Center, Cincinnati (2006), and the Renaissance Society in Chicago (2007). Her untitled work for the 2008 New Orleans biennial, Prospect.1, garnered considerable attention and was reproduced in numerous art publications, including this one [A.i.A., Feb. ’09]. Amid post-Katrina devastation, she covered a derelict home in sweeping sprays of yellow and orange-red to suggest that it was on fire.

The most ambitious installation Grosse has produced in the U.S. to date, “One Floor Up More Highly”—whose title comes from a phrase scrawled on a building, directing patients to a dentist’s office near Grosse’s Berlin studio—is an interrelated, multipart work that fills three enormous galleries. The largest section is a rather theatrical panorama situated on the ground floor of the former textile mill. Stepping into the cavernous gallery of MASS MoCA’s Building 5—about the size of a football field—viewers encounter hills, valleys and mountains. Pathways allow easy passage and offer numerous vantage points to view this peculiar and richly varied terrain. Visitors are dwarfed by tall slabs of unpainted white Styrofoam rising some 30 feet. Sliced and shaped with a hot wire into pointy stalagmites or giant crystals, the pieces also evoke sections of collapsed skyscrapers, or even more closely, crumbling glaciers.

The jagged white slabs thrust skyward from waist-high mounds of dirt, studded with real twigs, gravel and rocks. These, plus huge resin boulders, are all spray-painted in great swathes of outlandish hues: hot pink, deep red-orange, Day-Glo green, yellow and blue. The piles of sprayed dirt have the rich density of tons of dried pigment, a feature that recalls certain Yves Klein works of the 1950s.

The overall image conveys the sense of awe that one feels in response to nature, like paintings by 19th-century German Romantics. Specifically, the work calls to mind Caspar David Friedrich’s majestic 1823-24 painting of a ship wreck in the arctic, The Sea of Ice, in the collection of the Hamburger Kunsthalle. This painting of a doomed expedition imparts a sense of tragic beauty not unlike the mood Grosse establishes. Her wildly colorful environment indicates an abstract, phantasmagoric mindscape that might offer a transcendent experience. At the very least, “One Floor Up More Highly” invites a sustained reverie. In order to arrive at that state, however, the viewer traversing the space is obliged to accept a visual, intellectual and physical engagement with the work. Grosse’s installation is most effective as it envelops viewers in a kaleidoscopic fusion of color, form, rhythm and texture.

In the middle of one long wall, sprays of red, blue and purple rise from the floor to cover rows of high windows.[pq]Grosse’s installation is most effective as it envelops viewers in a kaleidoscopic fusion of color, form, rhythm and texture.[/pq]The translucent acrylic allows highlights of color to further enliven the space in the manner of stained glass. At first unnoticed, tangled wads of clothing appear throughout Grosse’s installation, including sweaters, pants and shirts wedged between rocks or partially buried under the dirt, all garishly painted over. Despite the high tones, the gnarled garments imply something sinister. Conjuring disappeared bodies and unknown human remains left behind after some calamity, the ragged clothing adds an abrupt note of discord to the lush environment, and a hint of despair.

Literally embedded in the landscape, the perplexing details provoke considerable consternation. What has happened here? Where are we? Are we confronting the past, present or future? The overall design suggests the scene of a momentous event, but whether apocalyptic or regenerative remains a matter of speculation. What is clear is the unexpected emotional impact these garments give to the entire installation. What initially appeared rather simply as Grosse’s witty and fanciful cosmic playground suddenly implies a narrative with darker connotations—the aftermath of war or an environmental catastrophe, as examples. It could be the site of a nuclear disaster, where everything still glows with a sort of radioactive aura. Providing no specific answers, the artist leaves the viewer to conjure his or her own scenario.

In a counterpoint, Grosse, with a sizable dose of humor, adds a passage of quiet respite. A long bench, in the form of a wooden plank traversing a large mound of bright red dirt, allows visitors to rest and contemplate the view, as one would in a nature preserve. Across from the bench, one of Grosse’s large, shaped abstract compositions lies on the floor. Painted with sprays and splashes of yellow, green and red on a thick white panel made of surfboard material (glass-fiber-reinforced plastic), the concave, elliptical object recalls a giant kite or stylized airplane wings.

Moving from the main gallery into a smaller room with lower ceilings, visitors enter an entirely different realm of Grosse’s invention. This space appears enclosed like a large basement or a warehouse. Broad passages of paint in fluorescent pink, viridian green, purple, orange and lime seem more urban and graffitilike than those in the larger gallery. They cover the floor, walls and ceiling, suggesting the interior of a tacky nightclub after the crowd has gone home and the lights have been turned up.

Articles of clothing appear again—T-shirts, underwear and slacks—this time strewn about the floor and covered with paint. Once again these disembodied garments spark broad and unsettling speculation. Perhaps they belonged to hedonists who disrobed during a heated, drug-fueled rave. Or is this evidence found at a crime scene: murder at the disco, perhaps, or a shoot-out at the bar?

This upper gallery, smaller than the others, is a kind of terrace overlooking the main space. From here, the view of the vast installation below is arresting. And, on this upper level, the scope of Grosse’s vision becomes apparent. The works here may be seen either as a summation or an introduction to her art. On view are finely wrought examples of the three principal types of works that have preoccupied her for the past decade: installations, three-dimensional paintings and more conventional wall-hung canvases.

A kind of abbreviated version of the ground floor installation, a mound of dirt and twigs at the center of the gallery is sprayed luminous shades of blue, orange and yellow. Bundles of clothing poke out from the mound. Placed horizontally on the floor, an enormous convex panel painted mostly red looks like a stylized surfboard 15 feet long. It partially covers the colorful pile of debris. The elliptical work corresponds to the concave panel piece integrated into the first-floor installation. It also relates to a series of huge shaped paintings that Grosse recently created as permanent public works in Germany.

One such piece, an approximately 30-foot-high convex oval composition in purple and green, was installed last year on the facade of the Johanneskirche, a 19th-century Baroque-style Protestant church in downtown Düsseldorf.

More traditional in format, if not in image and design, a single, untitled canvas from 2010, an approximately 8-by-6-foot rectangle, represents the third group of works. Using sprays, pours and stencils, Grosse suggests here an undulating, fractured field of purple, red and gold. Though abstract, the painting echoes the collagelike layering found in some of James Rosenquist’s deconstructed images. The only wall-hung work in the show, the painting appears as a solitary icon on the otherwise empty back wall. The canvas bears a contradictorily grand and elegiac demeanor as if emblematic of the evolution of abstract painting. It also serves as a key to the entire exhibition, since it brings Grosse’s endeavor full circle. She transmutes the abstract visual language that began with paintings by artists such as Malevich, Kandinsky and Kupka in the early years of the 20th century and makes it intelligible and practical in the 21st century.