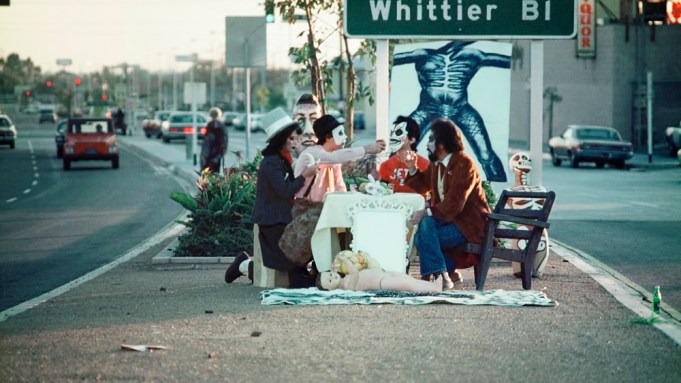 Relative to the artistic movements of the 1960s and 1980s, California art of the ’70s remains, historically speaking, uncharted terrain. The diverse practices pioneered by West Coast artists were often inextricable from countercultural lifestyles and many may well be resistant to institutional representation. Endeavoring to map these experiments in art and life, “State of Mind: New California Art circa 1970,” on view at the Bronx Museum of the Arts (through Sept. 8), presents the work of familiar figures such as John Baldessari and Paul McCarthy alongside lesser-known artists like Lowell Darling and Barbara T. Smith. A range of more obscure projects illuminates a broader context for Californian artists who have since risen to prominence, such as McCarthy, whose work is currently on view at the Park Avenue Armory and other venues in New York.

As its title suggests, the exhibition revolves around what co-curators Constance Lewallen, an adjunct curator at the Berkeley Art Museum and Pacific Film Archive, and Karen Moss, adjunct curator at the Orange County Museum of Art, term “California Conceptualism.” Yet the most provocative work in the show puts pressure on the category of idea-based art through a focus on the body, ritual, media and the social world.

California is both a site of production and the subject of many artworks on view, including Ed Ruscha’s photo-based conceptual projects examining Southern California’s sprawling urban topography. Instead of cataloguing an environment shaped by car culture, other artists actively disrupted it in works that resembled protest actions. In 1969, for instance, Joe Hawley, Mel Henderson and Alfred Young called 100 yellow cabs to a busy intersection in San Francisco for the Yellow Cab Event and documented the resulting confusion and euphoria in a film. Using nontoxic dye, the same artists also spelled out the word “oil” in the San Francisco Bay near a Standard Oil facility, recording the 1969 performance with aerial imagery. Paul Kos’s Sound of Ice Melting (1970/2011)-a large hunk of ice surrounded by microphones that amplify the sounds of its steady thaw-echoes these environmental concerns (the first Earth Day was celebrated in 1970) and exemplifies the durational nature of much of the work of this era.

Performance is nearly everywhere in “State of Mind.” At the exhibition’s opening in late June, the Bay Area-based Darryl Sapien re-created his 1973 work War Games in the museum’s courtyard, along with his partner Michael Hinton and their two sons. In the original performance, Sapien and Hinton, painted from the waist up, engaged in ritual battle in the exposed basement of a demolished San Francisco building while two men played a game of chess; this time, the sons took over the ritualized confrontation. As an exploration of conflict set against the backdrop of the Vietnam War and urban strife, Sapien’s performance is a lesser-known complement to Chris Burden’s Shoot (1971), which is also included in the exhibition.

In the shadow of the idealized image of femininity manufactured by Hollywood, performance also offered women a mode of critique and exploration outside of normalized codes of feminine behavior. In Eleanor Antin’s 1971 performance Representational Painting, the artist used the camera as a mirror and replaced paint with make-up to turn herself into a “Vogue hippie”-providing a cynical twist on the intersection of art and life as a complex of counterculture and advertising. “State of Mind” is rich in other feminist provocations that unfolded across California: from Linda Montano’s public chicken dances in San Francisco (she was arrested in her feathered headdress on the Golden Gate Bridge) to Suzanne Lacy’s reassembling of a lamb carcass in front of a live audience at the Woman’s Building in Los Angeles.

Two works in the exhibition position viewers as performers. Bruce Nauman’s Yellow Room (Triangular), 1973, invites visitors to enter a narrow room flooded with an unsettling yellow light, while Barbara T. Smith’s Field Piece (1968-72) provides a synthetic garden with large fiberglass resin stalks that light up with each step-a Silicon Valley pastoral. In the ’70s, art that was “interactive” in this way entailed a reformulation of authorship and aesthetic experience; today the same term evokes computer interfaces. In retrospect, even as it challenged how we see art, much of the work on view here seems to anticipate the optimism and anxiety about “user experience” that pervades contemporary digital culture-a phenomenon that also has its roots in California circa 1970.

“State of Mind” originated at the Orange County Museum of Art and the University of California, Berkeley Art Museum and Pacific Film Archive as part of the Getty Foundation’s multi-venue exhibition series “Pacific Standard Time,” and was brought to the Bronx Museum, its only East Coast venue, by Independent Curators International, New York.