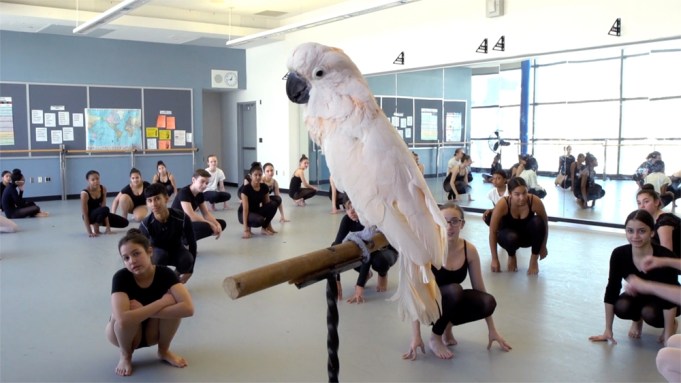 Just north of Hells Gate in New York City, the East River squeezes between Randalls and Wards Islands and the northeastern tip of Queens. In the center of this relatively narrow passage sits a sandbar called Middle Ground. It is underwater, visible only on maps and nautical charts, and yet it has become the fulcrum of an elaborate art project commissioned by the Solomon R. Guggenheim Museum and playing out across several New York neighborhoods.

Conceived and implemented by Pittsburgh-based artists Lenka Clayton and Jon Rubin, the project began by drawing an imaginary circle though Manhattan, the Bronx, and Queens, using Middle Ground as the center point and its distance to the Guggenheim as the radius. Six venues located along this circle’s path, ranging from a school to a TV studio, agreed to participate and cycle important items that represents an essential quality of what they do among themselves. From March to August, at the beginning of the month, each of these items rotated clockwise to the next venue, which tried to incorporate it as best they could into their regular activities. The Guggenheim, for example, gave a piece from its collection to a church, while receiving the notation for an ancient song from a research institute. An enumeration of all these items makes up the project’s full title: A talking parrot, a high school drama class, a Punjabi TV show, the oldest song in the world, a museum artwork, and a congregation’s call to action circle through New York. For the sake of convenience, however, the title is often shortened to …circle through New York.

In April, I sat down to talk with Clayton and Rubin about their project in a South Bronx pizza shop, a few blocks from one of the project’s venues. They had just completed a tour of the circle to check in with all the participants. Rubin described …circle through New York as a chance operation in the style of John Cage. “It’s an absurdist fictional construct that creates real events,” he said.

The parrot, a salmon-crested cockatoo named Pinkie from Pet Resources, is perhaps the most demanding of the rotating items. As Pinkie arrived at each location, Aubrey Mike, a specialist from the store, showed the staff how to take care of the bird (and returned regularly with a veterinarian to check on her). When the project started in March, Pinkie spent a month at the Frank Sinatra School of Arts in Astoria, Queens. The high school teaches performing and visual arts alongside regular curriculum, and Pinkie served as a model for life drawing and as an inspiration for movement studies, among other roles. In the following months, Pinkie cycled to Jus Broadcasting, a Punjabi-language television station around the corner from the Frank Sinatra School, where she lived in the office and appeared in some of the shows. Pinkie then rotated to the Institute for the Study of the Ancient World (ISAW) in Manhattan, where the staff tried to teach her the ancient Greek word for democracy and included her in two lectures on animals in antiquity. Pinkie lived on the rotunda floor at the Guggenheim and was present for Sunday services at St. Phillips Church in Harlem. This month, at the end of the project, Pinkie has returned home to Pet Resources in the Bronx.

The circular exchange among people and institutions with almost no prior contact or interaction, forced a polyvalence of new collaborations and negotiations as the venues adapted to each item. Jus Broadcasting dispatched four of their TV shows to shoot at the other locations. ISAW sent notation for the oldest written song in the world—a Hurrian hymn written in cuneiform on a clay tablet from the thirteenth century BCE. The Frank Sinatra School of Arts sent a high school drama class to rehearse and perform at the various venues. St. Philip’s Episcopal Church in Harlem was founded as the Free African Church of St. Philip in 1809. It has a long history of agitation for social justice and wrote a call to action against racial and economic injustice as its item for the project. The other venues were asked to use their platform to interpret and answer the call.

Guggenheim curators Nat Trotman and Christina Yang and project manager Anna Harsanyi organized …circle through New York as part of a relatively new social practice initiative. The museum not only coordinated the project’s logistics and covered some of the costs, but also contributed “Untitled” (Public Opinion), 1991, by Felix Gonzalez-Torres to the cycle. The iconic work is a pile of black licorice candy that is constantly replenished as viewers take from it.

When the Gonzalez-Torres piece was installed at Pet Resources, it sat atop waist-high, L-shaped metal shelving in the front of the store, the cellophane wrappers glowing from the sunlight streaming through the window. Ben Gill, the store’s owner, told me that people engaged with the work tentatively. “Even once they know, it’s hard for them to comprehend that they can take it,” he said. When I asked if kids from the neighborhood took a lot of the candy, he shook his head. “They mostly don’t like licorice,” he said with a laugh.

Rubin and Clayton developed their project for a year before putting it in motion. While poring over maps of New York, they came across the Middle Ground sandbar. Delighted by its name, they drew a radius from it to the Guggenheim as the basis for a circle. They then began walking the circumference and knocking on doors. They visited stores of every variety, boxing gyms, churches, the costume shop at Kaufman Studios, and the Queens Gazette, a local newspaper. “I feel like we found one of everything in the world,” Clayton said. “We went into hundreds of places.” Near the Ravenswood Generating Station they stumbled upon Troma Studios, responsible for the 1984 B-movie hit The Toxic Avenger. They also visited Rikers Island and LaGuardia Airport, which fall along the circle’s path, but decided in the end that the jail and airport were too inflexible for this type of project.

This is the first time Jon Rubin and Lenka Clayton have formally collaborated, and the project fuses their interests in dislocation, translation, and public engagement. Rubin’s work often transports objects and cultural practices into radically different contexts, working with the frisson that the ensuing juxtaposition creates. In 2010, he inaugurated Conflict Kitchen in downtown Pittsburgh, a take-out restaurant that served food from a country deemed hostile or antagonistic by the United States. The now-closed restaurant featured cuisine from Iraq, Afghanistan, Cuba, Iran, Palestine, Venezuela, and North Korea, the menu changing every few months. For the 2012 Shanghai Biennale, Rubin created The Lovasik Estate Sale, in which he bought and transported the entire estate of a Pittsburgh family to China. He arranged the family’s unassuming possessions as they had been in the original sale, and let attendees buy them.

Clayton’s work explores chance and transmutation by introducing formal constraints to everyday situations, often inviting people from outside the art world to participate. This year she created a project at the Fabric Workshop in Philadelphia titled Sculpture for the Blind, by the Blind. For the piece, Clayton described Constantin Brancusi’s 1920 Sculpture for the Blind to a group of visually impaired volunteers. The volunteers then sculpted the piece based on her words, producing seventeen new versions of the original.

Because of Clayton and Rubin’s work with unconventional venues and constituencies, the Guggenheim asked them to pitch a project for the museum’s social practice initiative. Launched last year, the initiative was started to support projects that “foster new forms of public engagement through community participation.” Rubin and Clayton’s project is one of the first to be supported by the Guggenheim, and they chose to incorporate the museum itself. “We wanted the Guggenheim to be implicated and affected by it, and we really started off with the idea of exchange and asked how could we set up an equal framework,” Clayton said. This aspect of the project seems like a form of institutional critique, in the vein of Michael Asher. Unlike Asher, however, who took the physical architecture of various galleries and museums apart to reveal their internal practices and relationships, Clayton and Rubin have intervened in the intangible architecture of the cultural and socioeconomic landscape in which the museum is situated.

This is the piece’s most compelling quality but also makes the totality of the work difficult to grasp as an outside viewer. The experiential value seems to lie in the minute interactions among the various participants, and the situations themselves. Rubin noted that while the project is large in scope and duration it is “played out in these really intimate, small moments, that are sometimes very internal, for an audience that is not public.” Art projects that rely on chance interactions often face this challenge. Artists must figure out how to present work that is ephemeral and expansive in a manner that crystallizes moments of aesthetic unity. Clayton likened their project to a form of inverted documentary filmmaking—a medium she studied. “In a documentary you go out and collect material and then you create the framework that goes over it that allows people to see things in a new way,” she said. “Here we created the framework on the ground, and then people exist within it and make the story up as they go.”

One way Clayton and Rubin have addressed this problem is by using video to document moments of the project that wouldn’t be accessible to an outside viewer. The parrot walking between the feet of a high-school dance class, a representative from ISAW explaining the oldest song in the world to the choir at St. Phillips Church, a parishioner at that same church meditating aloud on the meaning behind Felix Gonzalez-Torres’s piece, high school students giving monologues on injustice—these are presented in videos available on the project’s website.

New York is made up of people and places that exist in close proximity but segregated by economics, race, or simply the dissociative nature of urban life. This fact is implicit in the structure of …circle through New York, rather than a “message” that the artists force on the audience. The project uses humor and chance to draw disparate people and locales into exchange, and their subsequent interactions yield moments of poetic grace. The circle is an arbitrary system, centered on a random point, yet it asked for wholehearted engagement, and got it. It might be absurd, but no more, perhaps, than the systems and geometries that already connect most people, or keep them apart.