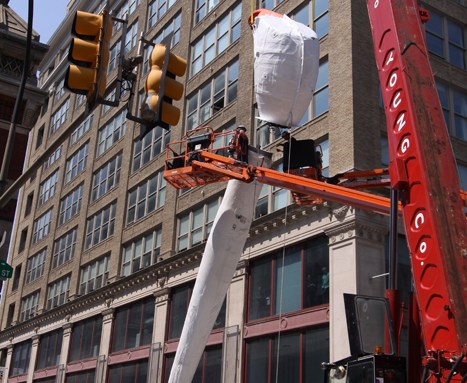 Philadelphia is especially a city of brotherly love when it comes to supporting artists working in public sculpture. Since 1959, the city’s Percent for Art Ordinance has provided revenue for 300 public projects. Claes Oldenburg recently received a $1.5 million grant from the city for Paint Torch, a 51-foot tall, 11,000-pound rendering of a turned-over paintbrush-cum-torch that was installed Saturday at the Pennsylvania Academy of the Fine Arts’ new $7.5 million Lenfest Plaza, which officially opens October 1 with a ceremonial lighting of the piece.

This tilted sculpture, with red bristles that will illuminate, is situated between the academy’s museum and the art school, “so the idea was to have something that would mediate between the two,” Oldenburg told A.i.A.. The form and subject of the work “comes from the museum, which is known for its paintings, and the school, which is one of the few institutions that encourages painting, or the use of a brush. The brush is also very much a sculpture so you have a form that is both sculptural and painterly. It suggests two approaches.”

Oldenburg, whose work has grown in scale as his career has progressed, has three prior public sculptures in Philadelphia (his biggest presence in the world). Clothespin, a 45-foot-tall Cor-Ten rendering that alludes to Brancusi’s Kiss, was the first, positioned in front of City Hall in 1976.

Paint Torch marks the first project Oldenburg has completed without the help of his Dutch-born wife-collaborator, Coosje van Bruggen, who passed away at the couple’s Los Angeles home in 2009. The two met in 1970 when van Bruggen was a curator at Amsterdam’s Stedelijk Museum. At the time Oldenburg was just transitioning to his large-scale works; subsequently, 40 were executed with her collaboration.

“It’s a bit lonely and you kind have to imagine or remember what she said in certain circumstances because it was always a give and take between us. There’s no doubt I miss her,” says Oldenburg. “Normally we would go to the site together and the ideas about the site would arise together; and she was also very good dealing with the officials and mayors and so on who would have to okay the sculpture.” He doesn’t mind doing the diplomatic work, but, he admits, “She was just much better at it.”

Oldenburg is re-examining his past for a traveling retrospective, opening in Vienna in 2012 and at MoMA in 2013. The show will center around his interactive piece, Mouse Museum, (1965–1977), a mouse-head-shaped, wood-and-aluminum curio that housed some 400 found objects. “It’s sort of a museum of the 1960s,” he says.