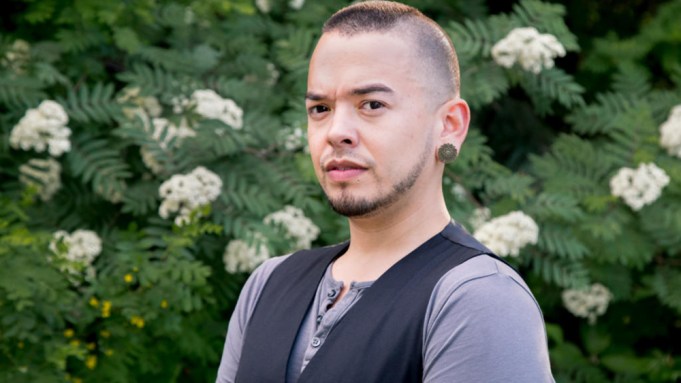 The Portland Art Museum’s biennial Contemporary Northwest Art Awards exhibition was previously a prize-driven showcase, but curator Grace Kook-Anderson has refashioned it into a triennial with a coherent conceptual framework. The inaugural edition, on view through May 5, is titled “the map is not the territory,” after a line by philosopher Alfred Korzybski about the difference between an object and its representation. In Kook-Anderson’s interpretation, the aphorism evokes a conflict between a colonialist mind-set and Indigenous stewardship of the land. Kook-Anderson’s statement claims to present “a generative conversation . . . bringing indigenous values to the forefront.” But this is a tall order when, of the eight artists included, only two are Indigenous. Perhaps we should take this claim simply as promotional copy appealing to current decolonial trends, and a loose summary of how the featured artists engage with issues like border violence and our future ecological dystopia. But if we are to take the goal of foregrounding Indigenous values seriously (as I believe the curator and some of the artists do), then the show falls short.

Henry Tsang, born in Hong Kong and based in Vancouver, endeavors to put himself in service to Indigenous causes. He deploys his research-based practice in the two-channel video installation Tansy Point (2019), wherein a Chinook Jargon voiceover narrates the Chinook nation’s struggles for federal recognition and sovereignty. The work is named after and shot on coastal grasslands along the Columbia River, the site of treaty negotiations with the duplicitous federal agent, Anson Dart, in August 1851, that were attended by witnesses from all five Chinook tribes. Perhaps in a gesture toward the nation’s erasure, the English captions for the voiceover are rendered to match the background, making them hard to read. Clearly legible captions would have been better. The invisibility metaphor takes precedence over functional clarity, which seems more like a Western aesthetic value than an Indigenous one.

Seattle-based Robert Rhee presents vessel-like sculptures on one side of a wall that splits the exhibition’s main gallery down the middle. Elegant and grotesque forms emerge from gourds and bicycle helmets, each displayed in its own vitrine. On the other side are fragments made from alginate poured into and removed from the sculptures. If Tsang attempts to “become” a vessel, allowing his practice to serve a decolonizing cause, Rhee engages in formal explorations of the “mutability of things” and the transitional nature of vessels in relation to maps. This sublimating move resembles other gestures in the show.

Too much of the work sidesteps direct engagement with decolonization and Indigenous sovereignty. The curatorial frame seems to take for granted the validity of the non-Indigenous artists’ relation to these lands, or assumes that including people of color in this context is inherently decolonial. Some included works deal with topics like deterritorialization and border violence. Borderline (2019), a room-size video installation by Portland-based Fernanda D’Agostino, is the first work one encounters in the show. Moving at times, hectic at others, the work algorithmically combines 13 scenes in 169 unique iterations. It uses found surveillance, military, and journalistic footage to express a contemporary attitude of crisis around climate change and migration. Its sincerity sometimes holds it together. In a similar key, Mary Ann Peters creates monuments for migrants. Her impossible monument (flotsam), 2015, is a net stuffed with flotsam, a reference to the retrieval of migrant remains; another, more alluring work is impossible monuments (the gatekeeper’s shadow), 2018, a human-size glycerin rectangle emanating a gruesome light and leaking from the bottom, with jewelry hidden inside alluding to collateral requirements for insolvent asylum seekers.

Ryan Pierce’s whimsical paintings and altered library books speculate on future forms of life, perhaps after ecological collapse. Their tone feels out of place, heavy-handed and quirky for their own sake (one book’s title reads Chlorocoitus: Positions and Techniques for Achieving Photosynthetic Orgasms). His paintings of plant specimens in Flashe and spray paint on panel wistfully engage the conquistador-like nature of exploration and classification, implying there is something worth recovering in colonial “discovery,” or that even if such tools are tainted, we must still deploy them when ecological crisis arrives.

Inupiaq artist Jenny Irene Miller, the show’s youngest participant, is keen to fill the space with Native presence. “Continuous” (2012-) is a series of twenty-two portraits of Indigenous queer and two-spirit youth. Miller selects subjects who speak to the Western queer movement’s limitations when it comes to accommodating Indigenous concepts of gender and sexuality. The artist includes a flipbook with a biographical statement by each portrait subject. “Being Two-Spirit means I have a clear path lit with wild opportunities,” says Ricky Tagaban. The visual presence of queer and two-spirit Native people is a critical inclusion, given that their voices are rarely heard outside their own communities. Rather than dealing in speculation and aesthetic concerns, Miller presents real people who generously choose to be vulnerable.

Anishnabe artist Charlene Vickers includes four sculptures: a small clan of polystyrene turtles, two sets of diviner tools, and Sleep Walking (2016), an installation comprising a circle of chairs, on each of which rests a blanket and moccasins. Just as Miller declares the continuous Indigenous two-spirit presence on these lands, Vickers uses her work to speak across epochs, from the ancestral time indexed by the turtles to the contemporary conversation indexed by the moccasins in Sleep Walking, some of which are made from beer-case cardboard and denim with traditional fur linings. The incredible Diviners Spears (2010) are crafted from cedar. At ten feet tall, they softly stand guard over all the stories told and not told in the space; at seven feet tall, the Diviners Grasses (2010) intertwine plants, human hair, cotton, twine, thread, and bamboo. Vickers activated these works during a public performance in the gallery featuring speech and singing, which centered on the reclamation of ancestry and the path to embodied healing.

Yet the show’s claim to put Indigenous values forward feels empty, something like Ann Bellamy’s installation of hollow stoneware hanging in a pyramid on fishing line, or like the perfunctory Indigenous acknowledgment statements that pepper introductory remarks at art and culture events in the Northwest. Acknowledgment and other aesthetic gestures are toothless without legal enforcement of treaties and land cession. While curator Kook-Anderson may be applauded for reinventing the CNAA prize show, and for providing the clearest curatorial frame this regional exhibition has ever had, we must take claims of decolonization seriously, and ask how art can measure up to them.