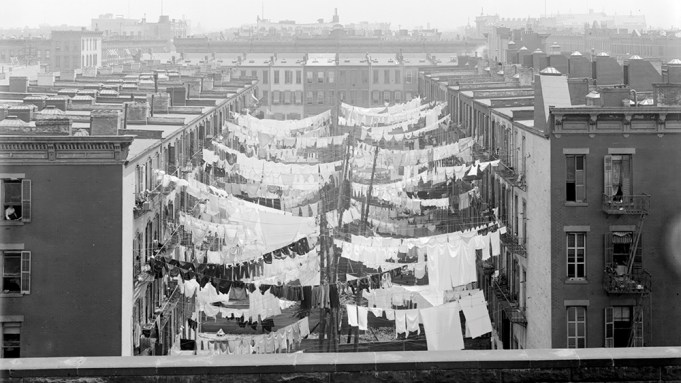 For the past 150 years, the two cities where I live—New York and Vienna—have been waging epic battles against the sunless spaces that often characterized tenement interiors, as well as parks and streets cast in the shadows of skyscrapers. The legacy of this conflict is visible in the physical character of these two cities, from the plans of apartment buildings to the setbacks on commercial architecture. Today, many architects still define their work by its capacity to provide transparency and sunny spaces. But this ongoing battle against urban darkness needs to be rethought, primarily due to our changing climate. In Vienna, the city’s municipal planners are currently exploring ways to bring back shady, medieval-style streets. The mayor of New York City provocatively suggested banning glass buildings last year. The future of climate resilience, it seems, entails rethinking what was once seen as modern architecture’s progress—its triumph over darkness.

Climate Change Has Already Transformed Everything About Contemporary Art

Small Talk: Art and the Weather at the 58th Venice Biennale

In the late nineteenth and early twentieth centuries, laissez-faire development practices in New York and Vienna resulted in extensive physical transformations that can still be seen in those places today. In both cities, developers quickly erected dwellings for a burgeoning population of the working poor and lower middle class. Such tenement buildings lacked adequate interior sunlight and ventilation, due to exploitative real estate markets and an absence of civic planning practices: the structures were built to pack in as many residents as possible. In both cities, numerous families could be legally squeezed into these cramped apartments. In Vienna, renters of the city’s tenement apartments, many of them windowless and subterranean, essentially “hot desked” their homes to pay the rent and address the housing shortage—leaseholders who worked during the day would rent their beds to others who worked at night.

Daytime darkness was probably the least of New York and Viennese residents’ problems. Nevertheless, the darkness of the cities’ residential, commercial, and public spaces became associated with otherness, disease, and poverty. In New York, Danish-American activist Jacob Riis (1849–1914) famously documented the lightless interiors of so-called pre-law tenements. Riis initiated a reassessment of tenement building practices, and transformed American documentary photography at the same time. He was among the first to introduce early techniques for flash photography from Germany to the United States—this process was necessary to capture the lightless interiors of the city’s architecture. In early twentieth-century Vienna, one of the city’s many unhappy residents mentioned the dark and miserable housing conditions in a notorious memoir titled Mein Kampf. All of this is to say that these spaces made significant impressions on their inhabitants.

Given the tendency of developers to maximize profit by minimizing sunlight, one can easily understand the general distaste for darkness in the built environment. In New York, urban reformers sought to transform tenements by demanding that developers include two interior open shafts for light and air. These inadequate slivers of space resulted in floor plans shaped like exercise weights, giving rise to the nickname “dumbbell tenement.” The building type remains a common feature in many Manhattan neighborhoods. The anti-darkness legislation for New York tenements extended to the city’s commercial sector in the 1910s. The erection of massive buildings in Lower Manhattan often cast smaller neighboring structures in permanent shadow, reducing their market value. To protect their investments, the city’s powerful real estate sector initiated a significant redrafting of the city’s building code to protect their buildings from shadow, transforming New York City’s urban sky. The resulting buildings—with setbacks that reduce the upper floors in size so that the structure narrows toward the top—ensured that, in heavily built-up areas, some light would reach the interiors of lower floors and the streets below. One can see the results of these codes throughout Manhattan in structures built between the 1910s and the early 1960s. The mandated changes ironically created a type of socialism of the sky, framing sunlight as a shared urban resource in the city’s most commercial sector.

In 1920s Vienna, then the capital of a socialist government, planners had a much greater ability to shape urban space. Activists transformed enormous areas of Vienna under the mantra “Licht, Luft und Sonne” (“light, air and sun”). Their efforts included massive new public housing estates, built for the city’s working population. These buildings provided not only bright and airy apartments, but also communal baths and great open parks that completely altered urban architecture’s relationship to nature. The Karl Marx-Hof (completed 1930), in the nineteenth district, with its enormous west-facing central courtyard, is representative of how this new ethic changed both public housing and urban environmental conditions.

Such planning in New York and Vienna responded in part to fears of urban disease. A now-disproved, late nineteenth-century theory argued that diseases like tuberculosis could be eradicated by increasing a population’s exposure to sunlight. Before the advent of this theory, tuberculosis sanatoriums were much darker inside. Over time, however, sunlight became increasingly associated with physical well-being. In Paris, the health-obsessed architect Henri Sauvage (1873–1932) drew diagrams that depict an evolution from dim, dense medieval streets to thoroughfares with staggered buildings that vary in proximity to the sidewalk or plotline, maximizing people’s exposure to sunlight. Around the same time, Le Corbusier drew similar diagrams showing a linear progression from dark to sunlit environs.

Due to associations with poor health, prevalence in cities’ disadvantaged areas, and negative effects on the profitability of urban space, darkness became an abject feature of the urban daytime in the eyes of city planners and municipalities. But that has changed: in 1920s Vienna, one might have had five days a year when urban temperatures reached ninety degrees Fahrenheit. Today, Vienna experiences almost thirty days between April and October that reach these temperatures. Climate change calls into question the value of interior daylight.

Extravagantly sun-filled spaces—once an unquestioned luxury—are increasingly becoming uninhabitable. The dangers of rising temperatures affect vulnerable groups the most. Since World War I, Vienna has remained among the European capitals with the largest population of disabled people. Today, it is one of few European cities where someone with a mobility disability—who uses a wheelchair or is blind—can work and easily get around. This is one of the reasons I choose to live there. Vienna also has a high population of elderly people and very young children, due in no small part to the city’s long history of providing affordable housing. Accordingly, during one particularly brutal heat wave, city hall announced that those of us who are disabled, elderly, or have very young children should avoid going outside during the daytime.

While darkened spaces were once thought to impair people, today they offer relief to those individuals most vulnerable to heat. How do we incorporate that idea into a vision of a future city? Many of the forms we associate with progressive, modern architecture—stepped-back and terraced buildings; transparent, crystalline towers—still dominate conceptions of urban progress. The belief that daytime darkness is an undesirable aspect of the urban environment that must be eliminated is pervasive, yet the project of “solarizing” the city continues in many contemporary firms. Architect Jeanne Gang recently completed construction in New York of an all-glass tower she describes as “solar carved.” The structure’s form both maximizes exposure to sunlight inside the building and minimizes shadows around it. Transparency and sunlight may have represented the height of progressive modernity a hundred years ago, but it’s unclear what these qualities offer urban dwellers today. It’s difficult to justify the energy wasted to heat and cool glass buildings.

Last fall in Vienna, my students and I worked to understand how and why darkness was deemed undesirable, so that we might find a way to bring it back. When we met with the City of Vienna’s planning department, we listened to proposals to plant more trees throughout the city. A standard, nonarchitectural approach to addressing sun exposure on city streets, this is a straightforward countermeasure to increasing urban heat. One planner also introduced a fairly shocking concept: bringing back the narrowness of medieval streets in future projects as a way to create a healthier city. Such narrow, dark streets are proven to be cooler during the summer months, and the circulation of air within them is surprisingly greater than their detractors described. I was delighted by the possibilities, and the historic irony. Nevertheless, my students and I knew Monsieur Sauvage and Le Corbusier would roll in their respective graves.

What to Watch in July: ‘Terminal List,’ ‘The Rehearsal’ and Ryan Gosling’s ‘The Gray Man’