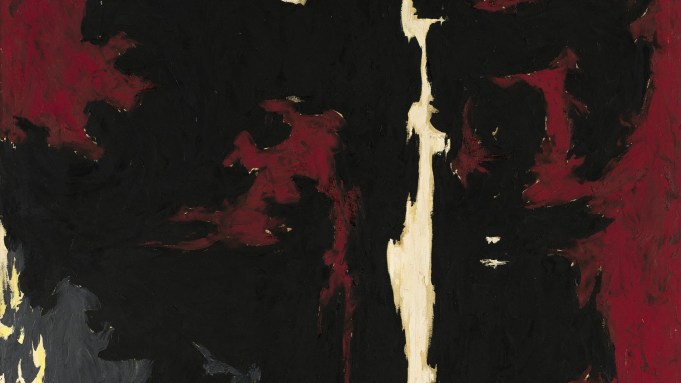 Nine angry protesters were arrested on York Avenue outside of Sotheby’s last night as some of the world’s wealthiest art collectors spent $315.8 million at the contemporary art auction, blasting by the $270-million projected high estimate. The arrests were made during a rowdy demonstration over a labor dispute between the auctioneer and art handlers. Protestors from Occupy Wall Street added a more militant component to the demonstration, which was “loud and unruly from the start,” according to an NYPD spokesman.

Inside the saleroom, all was business as usual. “The sale really blew every expectation away,” said Tobias Meyer, Sotheby’s worldwide head of contemporary art, during a post-sale press conference. Eighty-five percent of the 73 lots on offer found buyers. The total was the highest recorded at Sotheby’s since May 2008, before the stock market tanked, and the third highest contemporary evening sale in Sotheby’s history.

The sale was boosted by four rare paintings by Abstract Expressionist Clyfford Still, which totaled $114.1 million, more than a third of the sale’s overall tally. The seller was the city of Denver, and the funds were slated for the endowment of the newly opened Clyfford Still Museum.

The evening’s prize was a 7-foot-tall red and black 1949 jagged painting titled 1949-A-No. 1, which sold for $61.7 million. The work more than doubled the $25-million low estimate and achieved a new auction record for the artist. The anonymous buyer bid through Sotheby’s chairwoman (and former Guggenheim Museum director) Lisa Dennison. In a sign of the times, during the New York preview exhibition, the painting was displayed behind a thick pane of glass, an unusual precaution.

The second priciest Still was the smaller 1947-Y-No. 2, with a less dense composition and creamy palette, selling to the same anonymous buyer for $31.4 million, more than double the $15-million low estimate.

The buyer’s spree continued with the purchase of an untitled, heavily worked 1960 canvas by second-generation Abstract Expressionist Joan Mitchell. The stormy blue work sold for $9.3 million, a record for the artist at auction. The same work had sold for $3.2 million in 2007 at Christie’s New York.

Gerhard Richter, currently the subject of a large retrospective at London’s Tate Modern, was in demand. All eight works on offer found buyers. Abstraktes Bild, an 11-foot-wide 1997 fuchsia canvas, set a new auction record for the artist, selling to an absentee bidder for $20.8 million, nearly double its $12-million high estimate.

Another Richter, Gudrun, an 8-foot-square 1987 canvas featuring a bold red squeegee mark, sold to another telephone bidder for $18 million, more than double its $7.5-million high estimate. The eight Richter lots-from an anonymous collection-brought a total of $74 million, nearly a quarter of the evening’s total sales.

The sale included six Minimalist works, totaling $16.2 million, from an unnamed seller described by Sotheby’s as a “prominent American collection.” Ellsworth Kelly’s 1971 work Chatham X: Black Red sold to a phone bidder for $4.3 million, just above its $4-million low estimate, while Donald Judd’s Untitled (DSS 155), executed in 1965, went to a buyer in the room for $4.7 million, just under its $5-million low estimate.

A flurry of phone bidders vied for Cady Noland’s violent 1989 Oozewald, depicting President Kennedy’s alleged assassin, Lee Harvey Oswald, riddled with eight bullet holes and gagged with an American flag. The piece fetched $6.6 million, a record for the artist at auction, and more than double a $3-million high estimate. David Hammons also scored a record for a wall work comprising a pileup of African masks, bound together with wire. The piece sold for $2.3 million, topping the artist’s previous $1.5-million record.

The evening’s biggest flop was Mark Rothko’s 1964 8-foot-tall Untitled (Plum and Dark Brown). The somber canvas was projected to sell for as much as $12 million but failed to find a buyer.

But that didn’t detract from the enthusiasm. “There’s a real hunger for great material,” said Basilico. “It’s one thing to see one masterpiece. It’s another to see 15.”