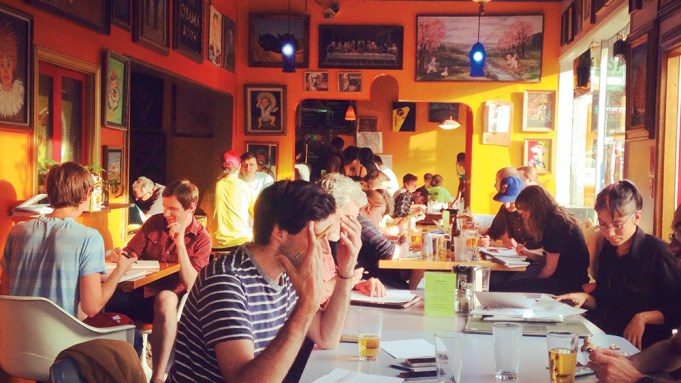 Alternative comics and zines are thriving again in Seattle as they did in the city’s heyday of the 1990s, though the situation is better described as a prospering scene than a prospering market: the consumers are the producers, the readers are the writers, the biggest names are the biggest fans. Dune, a collective drawing night that culminates in a monthly members-only publication, has acted in recent years as the taproot of this growth. An event open to all by word of mouth that results in an object that non-participants can’t buy, Dune is a category-defying mix of small-press production, limited-run distribution and participatory performance. Both a visual survey of the comics zeitgeist and an active part of it, Dune regularly brings together independent cartoonists and comic artists to draw, talk shop and disregard the value elsewhere attributed to audiences as they contribute their individual pages to the patchwork zine.

To experience Dune you have to draw, and you have to do it at Café Racer on the third Tuesday of the month. At the edge of Seattle’s University District, Café Racer features three rooms, joined railroad-style, resembling a neighborhood bar, a late-night diner and a clubhouse. On Dune nights, table seating in all three rooms goes quickly. Pencils and papers descend onto every flat surface, including the floor, and the place becomes remarkably silent.

There is never a set theme or prompt, just a time and a place, and anyone willing to spend a few hours sprawled on the floor or seated elbow to elbow while drawing a page is welcome.[pq]Dune is a category-defying mix of small-press production, limited-run distribution and participatory performance.[/pq]Drawings can be made in any medium, though the final pieces are all photocopied and printed in black and white. The publication’s cover, also printed in black and white but on colored paper, goes to the first person who volunteers to draw it. For the most part, participants sketch in pencil and then ink over their drawings in marker or pen. On average, 50 to 60 people show up to draw. Most contribute one page; the maximum is two. (In the three-year history of Dune only one submission has been rejected, because it was directly hostile toward other members of the group.) At the end of the night, Max Clotfelter, Dune’s founder and organizer, collects the finished pages along with $3 from each contributor for printing costs. Later, he resizes the contributions and lays them out in a flurry of 8½-by-5½-inch pages. The final haul is printed on an old Xerox machine and assembled in a staple-bound, half-letter (or “digest”) sized zine. The printed zines are distributed at the beginning of the following month’s get-together. One copy is printed for each participant and no more. To quote Clotfelter, “You’ve got to contribute to get a copy.”

The decision not to create additional copies was for the sake of simplicity. In the beginning, Clotfelter explains, participants were interested in producing extra copies to sell at comics stores. But there were questions about what would be done with the profits. Since Dune’s membership shifts from month to month, returning money to the group was not a straightforward option. The surplus, he decided, would have brought more responsibility than freedom.

At a time when a runaway art market has created a vast chasm between winners and losers, it’s interesting to consider cooperatives like Dune, which respond to market pressures by formalizing communal respites from competition. Dune’s output escalates slowly, according to internal participation rather than external demand. On the other hand, Dune is not a wholesale repudiation of professionalization. Unlike hobbyist groups, such as knitting circles or model train clubs, Dune brings children, amateurs and outsiders together with working creators of nationally distributed books and comics, for a momentary leveling of the professional landscape. As Eroyn Franklin, co-founder of the indie comics festival Short Run, put it, “You could sit next to someone who just published a book through Fantagraphics or Last Gasp, or you could sit next to a kid who is drawing their first comic ever.”

The contingency created by its ever-shifting makeup makes Dune hard to define even for dedicated participants. Ostensibly related to the drink-and-draw nights well-known in comics circles, where groups of artists meet at a bar on a regular schedule to help each other make progress on individual projects, Dune is different in that each night culminates in a shared product that doesn’t leave the community. The communal zine organizes participants around an objective, unlike the freewheeling social structure of the usual drink-and-draw night. Dune is thus more of a public event than the cliquish drink-and-draws are.

Dune has been compared to collective speed drawing events like 24-Hour Comics Day, when participants gather in stores, libraries or homes and attempt to create their own 24-page comics in 24 hours. Though participants share time and space, they work individually on their own projects. While aspects of this structure make the event similar to Dune the final outcomes are very different. Each participant aims to produce a narratively and artistically coherent product that is differentiated in the external marketplace.

The Hairy Who was a group of six artists active in Chicago in the 1960s and ’70s, whose work deployed the visual language of underground comics. In playing with traditions of fine art and vernacular cultures, the artists reveled in the ribald and the grotesque—much as participants of Dune often do. While the Hairy Who’s membership remained largely consistent as its audience grew, Dune’s membership is fluid and welcoming to outsiders, as long as they take their place as participants and not as disinterested spectators. This codified leveling of hierarchies within the confines of an event links Dune to questions being posed in the field of performance rather than in the visual arts or the comics industry.[pq]Dune creates a feedback loop of artists and audiences—a concentrated essence of Seattle’s community-oriented comics scene.[/pq]

Perhaps the most interesting characterization comes from Billis Helg, a veteran of Seattle’s zine and minicomics scene, who describes Dune as “more like a Happening than like an institution.” It’s an apt comparison, since Happenings, like many movements in performance in the ’60s, played with removing physical and conceptual boundaries between audience and performers, from raised stages to narrative plots.

A particularly relevant point of comparison is Richard Schechner’s New York-based Performance Group of the late ’60s and early ’70s, which explored the performative characteristics of community. The Group was especially interested in creating temporary communities by collectively acting out rituals, which were modified and embedded in plays as participatory events. They initiated a series of role reversals where audience members could become performers at key moments of the staged narrative. For example, in Dionysus in 69, a 1968 adaptation of Euripides’s Bacchae, audience members were invited to participate in birth and death rites bookending the performance, derived from an adoption ritual specific to the Asmat tribe of New Guinea. At the end, performers and audience members formed a procession that funneled out the front door of the theater and into the street. 1

There are, of course, obvious differences between an all-ages group of cartoonists collectively contributing to a zine, and a group of actors and audience members participating in a psychologically charged ceremony—not to mention the intense collaborative spirit and personal intimacy of the Group, which is quite different from the silent independence of Dune’s monthly mix of participants. But both break down barriers that separate actors and spectators. Both create a space for acting out a process of initiation or inclusion into a community.

A passerby might not recognize Dune as a performance—after all, it looks like a group of people scribbling, each attending to the page in front of them. It’s even harder to see the shared platform that connects them over time. Drawing and reading occur in a loop of influence that is as socially contained as any performance, only this one happens to take place silently, over a much longer interval of time. Dune creates a feedback loop of artists and audiences—a concentrated essence of Seattle’s community-oriented comics scene.