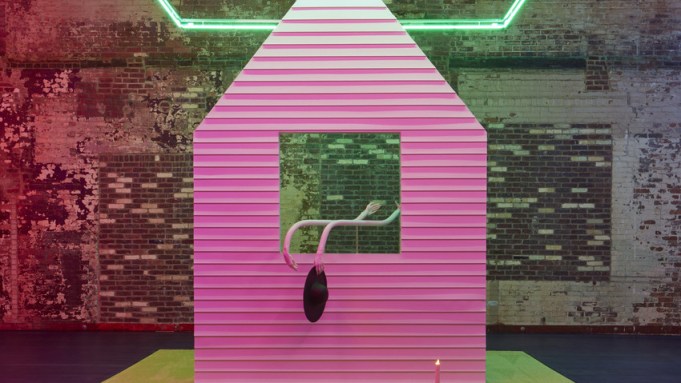 Alex Da Corte adapts his work to the environments where he exhibits it, developing total installations that respond to the spirit and space of the venue. For “Free Roses,” his first museum survey, the Philadelphia-based artist has absorbed the atmosphere of the Massachusetts Museum of Contemporary Art (MASS MoCA) and transformed it turn. Like Dia: Beacon or Pittsburgh’s Mattress Factory, MASS MoCA is an industrial space repurposed for the display of art, and like those other institutions it often shows large-scale Minimalist sculpture. They gravitate toward such work for practical reasons—all that bulky hardware fills warehouse expanses better than dainty paintings—but there’s an aesthetic payoff, too; formal repetition haunts a former factory with the phantom of mass production. Exhibitions in this vein at MASS MoCA include Sol LeWitt’s wall drawings, a permanent installation since 2004, and Richard Nonas’s “The Man in the Empty Space,” on view through September, with new and old works that arrange wooden railroad ties, granite curbstones, and other rugged found materials around a massive stone chair.

No one would call Da Corte a Minimalist. He uses repetition and variation as a generative principle, as Minimalists do. But he ends up at maximalism via his own queer serialism, where iterations are sometimes straight and sometimes twisted. His work isn’t so much about mass production as it is about consumption. There’s a friction between the large-scale structures of manufacturing and distribution behind dollar-store abundance and the unique, unpredictable moments of contingency when shoppers’ tastes and appetites come into contact with individual things, and that’s the tension that animates Da Corte’s work. For his sprawling, multi-part Lightning (2015-16), Da Corte has divided the hangar-like second-floor gallery into zones with colored deep-pile carpeting, blocked out again from above with matching squares of neon light. Geometric reason spawns angels and demons. On an orange square, a black widow spider creeps behind a giant Kleenex box that offers up a cloud of a tissue cast in foam. On a pink square, a stuffed dog in a dog mask rides a circular track, and there’s more kinetic movement on a glossy pink rectangle where twin plastic swans with artificial candles in their necks swim around a pond dotted with lily pads and pancakes with syrupy pats of butter that mimic the lilies.  On a corner of the yellow carpet at the installation’s edge, the quadrilateral geometry that organizes the floorplan mutates into a weedy growth: miniature plastic models of foodstuffs and other random items crawl on towers built from K’Nex construction toys that recall LeWitt’s cubed structures. Through juxtaposition, “Free Roses” plays up the theatricality of Minimalism in the other, more sober installations—turn around a wall at one end of “Free Roses,” and you find yourself in a stairwell eerily lit red; a door at the bottom deposits you at a sideways view of “The Man in the Empty Space.”

MASS MoCA’s worn brick walls fade into oblivion in the haze of color. The colored light saturates the sculptures, too, making details hard to discern. This can feel like a misstep—like when a chef overwhelms the complexity of his ingredients by adding too much sauce. The wall texts and accompanying brochure include Da Corte’s account of the materials that comprise the exhibition; these inventories read like a Rabelaisian litany made deadpan by the format of the caption. But the totalizing elements—which include sound and smell as well as color and light—set Da Corte apart from other artists who work by aggregating readymades. His results are a fantastic permutation of the thrift-store or dollar-store environments where his work begins, the straight shelves that host a riot of odds and ends, all awash in wan fluorescent light. He exaggerates that logic to reproduce it as his own. A purple patch of carpet in Lightning swarms with everything pumpkin—a deflated Halloween decoration, a plastic pumpkin, an actual gourd, transparent bottles of orange shampoo and lotion that probably carry the scent of pumpkin spice—and above it all leans a decorative window grate. The central circle with thin spokes radiating out to the rectangular frame suggests the plump ridged sections of a pumpkin growing outward from its round top, flattened in metal.

Da Corte works by analogies where the terms of comparison can change. This method is most apparent in a side gallery of four tabletop sculptures. The surfaces sit on sawhorses; two are mirrored panels, others are Ikea shelves still in wrapping. They hold objects that imply, variously, skins, sheathes or coatings; in Brown and Mercer (2013), a fiberglass foot stands opposite a laptop cover pierced by a rubber snake. The tableaux appear to be conceived as a series, but they are different sculptures, made between 2012 and 2015, united here by their similarities, and by a mechanical bat that inscribes the space from above as it flies around on a circular track, red eyes flashing.

Some of the tabletop tableaux, or other arrangements like them, were used in a 2012 series of videos. Video is an important part of Da Corte’s work because it shows objects in movement, that these things are not static but part of a trajectory of possibility, an encounter. In A Season in Hell (2012), an athletic young man with a clean-cut hairstyle and attire takes a black egg from its perch in a white vase and cracks it, spilling its innards on a shiny table the color of watermelon flesh. Then he takes an orange tube capping a fountain pen and uses it to snort the raw yolk, which drips from his nostril as he straightens himself and returns the tube to its place. Slow motion draws out the action, giving you time to guess where it’s headed, and the punch line could satisfy or confuse you. A simpler video, Chelsea Hotel No. 2 (2010), comprises short clips of the artists’ hands touching objects. A flour-dusted hand stacks slices of white bread, then smooshes the tower down. It squirts blue shampoo into a wastebasket with green plastic weaving imitating wicker. Red-stained juicy hands snip slices of baloney along a diagonal. The video is set to the eponymous song by Leonard Cohen, a sad, soulful waltz with an ambling but insistent bass line that dances around the inevitability of diatonic chord progressions. Cohen’s ragged voice sometimes lands on the beat, sometimes just off it or after it, the way that the objects in the video meet expectations in some moments and defy them at others.

The appearance of pop songs in art often seems like a cop-out, as if artists exploit their emotional impact to compensate for a lack of the same in their own work. But Da Corte’s use of the Cohen song in Chelsea Hotel No. 2 is so precise. Elsewhere he uses more abstract electronic compositions, and he’s worked with composer and producer Dev Hynes to make soundtracks, including the solemn tones that envelop the far end of Lightning, which rearranges its namesake, Joseph Beuys’s Lightning with Stag in its Glare (1958-85), a permanent installation at MASS MoCA. There are bronze casts of fecal forms, and a tripod and a cart with lumpy heads approximate animals grazing around them. At the center is the lightning strike, petrified in a ziggurat of loam. The pieces of Beuys’s installation usually take up more space in the gallery, but Da Corte has tightened them into a circle of bare floor, surrounded by green shag carpet and bathed in green light. On the wall he’s hung a plastic sword piercing a monochrome painting—a gesture to European mythology to heighten the primal mystery of the Beuys.

Beuys makes a fascinating foil for Da Corte. Both use food in their work. Beuys used blocks of lard, real and cast, and the canned food and packaged sausages of postwar Germany’s meager diet, mixing them with totemic symbols to evoke a connection between the storage of caloric energy and its activation in the body, and the symbolic power of objects that animates the life of the soul. Da Corte uses potable liquids and real spices for their olfactory effects. But his sculptures usually incorporate more durable plastic food, the kind found at party supply stores: the stuff of sustenance already copied as decoration. Beuys found the magic of Tatar shamanism and medieval mysticism transmuted in modernity, and Da Corte picks up where Beuys left off; in contemporary America’s more motley world of consumption, he finds magic in encounters among things, tastes, and desires.