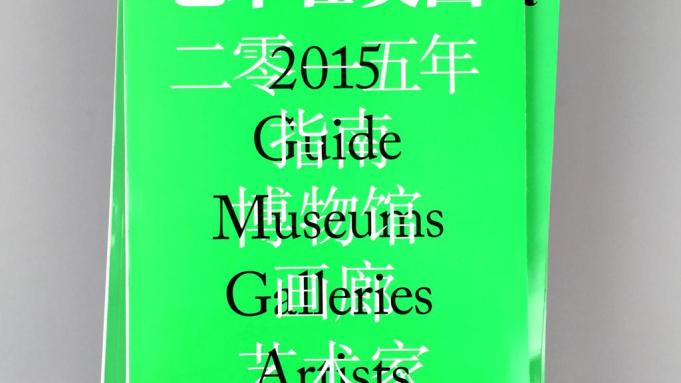 A.i.A. commissioned New York-based design firm Project Projects, winner of the Cooper Hewitt Smithsonian Design Museum National Design Award in the category of communications design, to create the cover for the 2015 Guide to Museums, Galleries and Artists, on newsstands now. Since its foundation in 2004, the multidisciplinary studio has grown to encompass a downtown exhibition space that has housed the galleries K. and  P!, directed by Prem Krishnamurthy, and the publishing house Inventory Press, led by Adam Michaels. A.i.A. sat down with Krishnamurthy and associate principal Chris Wu in their Chinatown office to discuss their design, typographical focus and the imperfections of translation.

JULIA WOLKOFF  How did you approach designing the cover for the Annual Guide?

PREM KRISHNAMURTHY  We were interested in the fact that the magazine is called Art in America, but it obviously covers much more than that. An important starting point for us was discovering that in its early days, the magazine used to be titled Art in America and Elsewhere. It’s hard to talk about art in such a local, specific context anymore. Even conversations happening now around whether the Whitney Museum should be called by its full name, the Whitney Museum of American Art, seem anachronistic. Our very first idea was to try to complicate the situation and treat our design as a kind of intervention or hijacking that would superimpose another language and introduce questions of global communication onto the cover of the magazine.

WOLKOFF  Why did you choose Mandarin, as opposed to Arabic or another widely spoken language?

CHRIS WU  We actually tried an Arabic version but felt that it watered down the concept. I was born and raised in Taiwan and moved to New York 10 years ago. Mandarin is my mother tongue. With Chinese, we had the flexibility to play with the connotation behind the language. The translation is very specific. For example, A.i.A. has a title in mainland China, which has been used for a decade or two. In China, the title does not have a conjunction; it is American Art. We intentionally did not use this title, but instead made a literal translation.

WOLKOFF  Translating Art in America back into English as American Art greatly changes the connotation of what the magazine is about. It localizes the magazine even more than the English title.

How did you come to the decision to use only text in your cover as opposed to any imagery?

KRISHNAMURTHY  As a studio, we tend to be very typographically driven. It’s interesting to think of text as a medium in the sense that the choice of typeface, the way in which type is set, communicates all of these nonverbal things.

WU  The typeface choice on the cover is also very straightforward. We made a specific decision to have it set in a serif typeface that relates to the Art in America masthead. Then the Chinese text is in a matching serif Chinese typeface. It’s an existing typeface. Although we did do quite a bit of detail modifications to get the overlapping correct.

WOLKOFF  The Mandarin and English characters seem to recede and come to the fore in equal measure, creating a duality between them. But the colors that you chose are straightforward and bright—there’s definitely no receding into the background. How did you come to choose neon green and hot pink?

KRISHNAMURTHY  Sometimes we start from exclusions. It was clear to us that we were not going to use any of the colors that are highly coded with China, like red. Then there was a set of criteria that those colors needed to achieve. In the two versions, the typography shifts between black and white. You have the black English typography and then the white Mandarin typography on the green cover, which is then reversed on the pink. We wanted two colors that would have a middle value where you could use both black and white on them. And also, we wanted the colors to be eye-catching and summery. We wanted them to have a vibrancy that would befit the content of the magazine.

WU  The bright, almost neon colors offset the traditional feeling of the serif typography. It was a very intentional decision based on both the restraints and the content. We could only do one Pantone (the green) and one CYMK full color (the pink).

WOLKOFF  In response to its Chinatown location, your galleries have put Chinese signage in the storefront and also worked with Chinese-speaking artists and exhibition designers. But the cover for A.i.A. is addressed to a national, even global audience, rather than a local one of passersby. How does multilingualism in design function differently in those contexts?

KRISHNAMURTHY  It’s happenstance. The reason why P! had its mission statement in Chinese as well as English is because it’s located in Chinatown. If we weren’t in Chinatown, and there wasn’t a significant population of Chinese people walking down the street, then I wouldn’t have done that.

We’re assuming that most of the people who buy the magazine do not speak Mandarin and don’t read Chinese. In that case, it’s working as a way to make people consider what it means for the magazine to be “art in America” and how we think about art in 2015 in a global context. On the other hand, in an ideal world, maybe there will be people who would normally not be interested in the magazine because they think of it as being geared towards a very specific audience or subject, who might now think of it slightly differently. Hopefully it gives people another way to think about the magazine and its constituencies.

WU  I can’t really speak for the gallery, but the way that we think of multilingualism is based on our audience and the purpose of the design. We always feel that it’s more interesting and challenging to work on design projects that include multiple languages. We put them on a 1:1 scale. There’s no hierarchy. We did a project in Istanbul which had a lot of Turkish language in it. Then we did projects in Montreal and in Europe and they always had French or German or Dutch. The multilingual is a very important part of how we handle or come up with design solutions.

WOLKOFF  How do you feel that translation functions in art and design?

KRISHNAMURTHY  Design is mediation but it’s also an act of translation; it’s taking a set of ideas or text or images from one context and making it accessible to a new audience through the way they are presented and disseminated. On the other hand, translation is nearly always imperfect. There’s always something that’s lost. In parallel with the design of the cover, we tend to believe that communication is never transparent. Even though you might strive, as a design firm, to communicate complex ideas, there’s never a condition in which everyone understands the same idea. In fact, what you’re trying to do is tell a very nuanced story, one that has inflections and one that is actually imperfect.

This cover does have some precedence in our work. In 2013, we designed the Danish pavilion at the Venice Biennale with Jesper Just, for a project called “Intercourses.” It was about mistranslation. The whole graphic communication system is about a thing that appears to be a Chinese character, but is actually a made up symbol that doesn’t have any communicative value. That was an important moment for us in thinking how-particularly in a European consciousness—Asia and China still represent the “other.”

WOLKOFF  I’m curious about your notes on the cover on the last page of the Guide, particularly the Katy Perry tweet you included.

WU  Our idea for the back page was to expose the issues and questions we were thinking about with the cover and then make them even more problematic instead of providing solutions. The Katy Perry picture is a perfect example of something lost in translation. Katy Perry went on tour in Asia and performed in Taipei in a costume with sunflowers on it. The sunflower is the symbol of the recent student protest in Taipei about the trading agreement Taiwan has with China. When she came out onstage wearing that everyone thought, “Wow, she’s on our side,” but apparently that’s just the outfit that she’s been wearing for the entire tour. The next city on her tour was Beijing. All of the fans were worried that Katy was going to be banned by the government because she supports Taiwan in protests against China. And nothing happened, the shows went on. The next day she tweeted that she loves China.