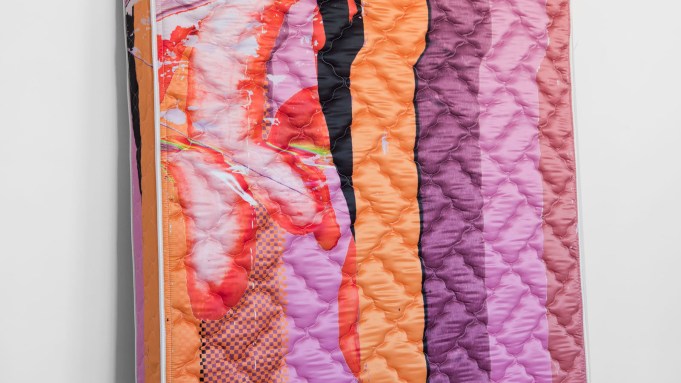 During the early hours of the VIP preview at Art Basel Miami Beach today, rapper Sean Combs, dressed in all black and wearing shades, was seen browsing the aisles with his entourage. Most art-fair purchases are not cash and carry. But Combs was seen leaving the fair holding a photographic print by an unidentified artist above his head like a trophy as a scrum of photographers snapped pictures.

Combs wasn’t the only one making quick acquisitions. A top New York art advisor told A.i.A. that the things he really wanted were already sold. “But don’t quote me!” he said. “My clients would be mad that I wasn’t there first.”

“We sold several things by e-mail before the preview,” New York dealer Jane Hait, of Wallspace Gallery, told A.i.A. Exhibiting in the Nova section for younger galleries, Wallspace is showing painted sculptures by Galen Gerber, who will be in the 2014 Whitney Biennial, for $12,000-$22,000.

Also in the Nova section, Claudia Altman-Siegel had sold two editions of a Shannon Ebner photograph, for $8,000, by 11:35.

Secondary market sales were also strong, with Nicholas Acquavella reporting to A.i.A. a half-million-dollar sale of a tiny Wayne Thiebaud pastel from 1964.

Whitney Museum of Art curator Scott Rothkopf, along with Whitney board co-chair Brooke Neidich, browsed among the Martin Creed paintings at the stand of New York dealer Gavin Brown. Neidich indicated a Matt Saunders C-print across the way at the stand of L.A. gallery Blum & Poe. “I like it but it’s already on hold,” she lamented.

By 30 minutes into the preview, Emanuela Campoli of London’s Campoli Presti had sold an editioned work by Jason Loebs three times over, and had sold all the Liz Deschenes photographs on display for $15,000 to $35,000.

VIPs like Leonardo DiCaprio and Elle Macpherson circulated among the booths. A-Rod was sighted with New York art advisor Jeanne Greenberg Rohatyn at Berlin gallery neugerriemschneider’s stand, which had been designed by Jorge Pardo, and which turned the typical gallery booth inside out. Vitrines on the exterior walls held works by gallery artists, while the interior had been transformed into a low-lit lounge with Mexican colonial-style furniture designed by Pardo, dark wood and colorful fabrics. The hanging lamps, by contrast, were geometric clear plastic designs that are more characteristic of Pardo’s modernist style; “Those are pure Pardo World,” the gallery’s Maia Gianakos told A.i.A.

“I love it!” L.A. collector Eli Broad told A.i.A. at the neugerriemschneider booth. “This is a great work of art.”

Ninety minutes into the preview, New York dealer Sean Kelly said that sales were so strong that he hadn’t been able to meet with his staff to compare notes. “But we’ve sold a lot,” he said, standing in his booth showing work by Laurent Grasso, Marina Abramovic and Kehinde Wiley, among others.

“We sold three Guyton/Walker pieces in the first hour for $65,000 each,” a staffer from NewYork’s Greene Naftali told A.i.A. The works are colorfully printed mattresses, with bright abstractions drawing on paintings by the artist duo.

High-powered curators were also in the mix. Adam Szymczyk, newly appointed artistic director of the next Documenta, studied a 42-part 2011 work on paper by Polly Apfelbaum at Galerie nächst St. Stephan.

Reached by phone near the end of the day, collector Michael Hort told A.i.A. that he had “bought a whole wall” of works by Marina Perez Simao at the booth of Brazilian gallery Mendes Wood.

“The fair provides a great mix of established artists and unknown ones,” Serpentine Gallery director Hans Ulrich Obrist told A.i.A., seated outside of Fondation Beyeler’s stand . “Miami offers an encounter of many geographies, and there’s the opening of the great Herzog & de Meuron-designed Pérez Art Museum Miami. The city is an exhibition.”