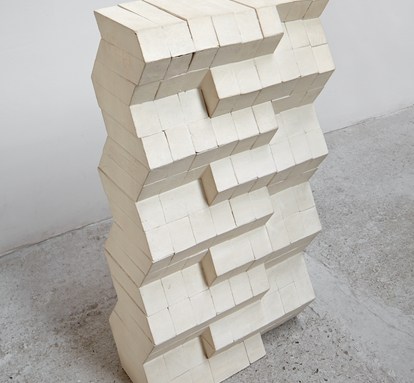 How do new generations of artists absorb the art of the past? “Concrete Remains: Postwar and Contemporary Art from Brazil,” a compact show on view at Chelsea’s Tierney Gardarin Gallery (formerly Cristin Tierney), through June 22, is, in one sense, an exploration of this question. It also encapsulates an important area of Latin American art, shedding new light on the ongoing preoccupation of 21st-century Brazilian artists with their nation’s major contribution to 20th-century art: Concrete and Neo-Concrete art.

An austere form of geometric abstraction influenced by European works, especially those by the Swiss artist Max Bill, Concrete art was centered in São Paulo in the 1930s and ’40s. Launched in Rio de Janeiro, the Neo-Concrete movement, which flourished in the 1950s and ’60s, was more open and fluid, encompassing a wide variety of expression as well as mediums, including film and performance.

Organized by São Paulo-based curator Jacopo Crivelli Visconti, “Concrete Remains” contains some classic examples of Concrete works by Geraldo de Barros, including several of his influential “Fotoforma” series of abstract photos (1949-50) featuring overlapping black and white rectangles. “The artists of the Concrete movement had a utopian vision,” Visconti told A.i.A. in a recent interview. “It was a relatively stable time for Brazil, economically and politically. The Neo-Concrete movement, by contrast, evolved during a more tumultuous period. These artists’ works are more international in scope and appeal, and that’s why today they are shown extensively and are better known outside Brazil. Concrete art from Brazil, on the other hand, is only now being recognized abroad.”

Most prevalent in the exhibition are strong Neo-Concrete pieces by artists such as Amilcar de Castro, Hélio Oiticica, Sergio Camargo and Lygia Clark, whose metal construction with movable parts, Pocket Bicho(1966), is one of the show’s highlights. Juxtaposed against these familiar pieces are representative works by younger artists, such as Iran do Espírito Santo, whose precisionist carbon paper series of drawings, “Pro Labore” (2008), closely correspond to de Barros’s “Fotoformas.” Fernanda Gomes’s spare objects, featuring white paint on found wood, also find a kinship to painted white monochrome sculptures by Camargo, such as his totemlike wood piece from the early 1980s on view here.

Recent works by Jac Leirner, including her meticulous grid watercolor compositions and modular wood floor sculptures, similarly relate to Clark’s sculpture. “You can see an emphasis on the act of cutting and folding in both artists’ works,” Visconti commented. “Clark had a great interest in psychiatry, and her modular sculptures were meant to be rearranged by the viewer, in an effort to engage the audience in physical as well as mental ways. Of course, the gallery visitor cannot pick up and reconfigure one of Leirner’s new modular sculptures, but the suggestion and possibility of that action are clearly in play.”

A site-specific light-projection piece by Spanish-born Brazilian artist Daniel Steegmann Mangrané, titled with the symbol ^, demonstrates the range of possibilities young artists see in the Neo-Concrete esthetic. In this theatrical work, installed in the gallery entranceway, a triangular beam of light, emanating from a slide projector mounted on a waist-high stand, illuminates a triangular patch of gold-leaf flakes that has been fixed to the wall. Visitors walking into the main gallery block the light and create air movement, which then causes the gold triangle to flicker, as if heralding their passage into a new space.