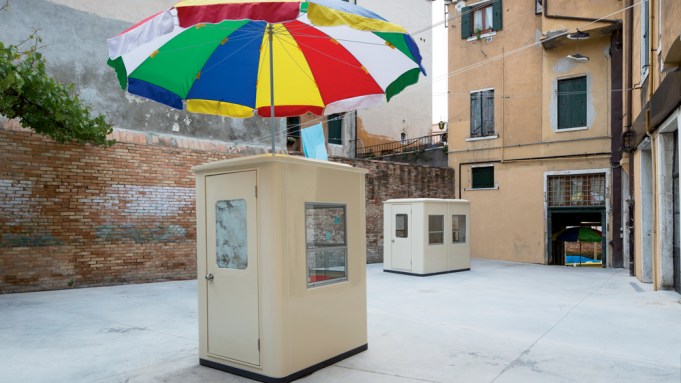 Lately, I’ve been considering how to explain Lee Kit’s work to people who have not previously encountered it. Translation is never an enviable task—and the descriptive mode of art criticism is in essence an act of translation from the visual to the linguistic. But it is particularly challenging in the case of Lee, whose work can appear so mundane at times that the writer risks making it sound trite or banal. If anything, it is an interrogation of the banal. But even that is not saying enough, since Lee’s domestic environments are actually so disturbing and off-putting (if one spends enough time in them) as to be otherworldly, alien. They probe what we might call the painterly, that realm where two dimensions give way to the illusion of a third or perhaps even more.

You can enter one of Lee’s “settings,” as he refers to them, and experience flatness in a deep way. From far away, his installations look like paintings; they truly seem like paintings when you try to re-create them in your memory. The carefully, even delicately placed objects and sounds (indie pop songs are frequently employed as background music) create a depth and multidimensionality, bringing to these spaces an imbalance and a resonance, the gift of pause. Time makes itself felt; contemplation becomes a two-way street. You take in the setting, searching for more hints of the human presence, the artist who certainly must have placed all these things here, though clearly he has long ago vacated the premises. Meanwhile, the objects that animate the setting take you in, making the spectator an actor, an active agent—the latest living force to wander in and become a part of it all.

You would have experienced this upon entering Lee’s installation “You (you).,” Hong Kong’s entry in the 2013 Venice Biennale. Arguably the most suggestive manifestation of his aesthetic to date, it was situated in a stark space directly across from the portal to the Arsenale. You would have passed through a courtyard, where you would have been confronted by two guard posts, the sort that one finds at the entrances to certain apartment complexes in big cities in mainland China. A rainbow umbrella had been stuck atop one of them. You would have peeked in the windows of each. In one sentry box, two of the three windows bore a blank blue Post-it note; the only other item present was a blender. The second box featured a slightly more lively arrangement, consisting of a Nivea face cream container, an empty plastic cup, a small set of drawers and a garden chair. These sentry posts had clearly been abandoned, but why and by whom? What exactly had they been guarding?

You would have entered the nearby building to search for more clues. Inside, it looked like the interior of a house—almost. Blue carpeting. On the floor, in one corner, an unplugged hair dryer. Next to it, an empty ashtray. The brick walls painted white. Walking around, you would have found a few things hanging from the walls, though mostly their surfaces were blank. A plastic clothes hanger dangling from a nail. A square of floor with no carpeting. A small white table, probably from IKEA, had been placed there—though there was nothing on it. Behind the table, in the corner, a blue bucket. Nearly the same blue as the carpet. A simple blue vacuum cleaner. A video monitor in another corner, showing the vacuum cleaner being used by a person with bare feet (the rest of the body unseen), on the very same blue carpet you would have been walking across wearing shoes. You would have tried to figure out when exactly it had been vacuumed. And why. For whom.

Just for you, alone, it would have seemed. Just two rooms. Some paintings on the wall. On the surface of one, the smeared words “Throw away the keys.” Video monitors, a laundry hamper. Someone had sawed a mattress in two and dumped it in a corner—perhaps an act of revenge against an ex-lover. Walking through these two rooms, you would have experienced the implication of the domestic. You would have certainly felt that you had left behind the white cube, the spectacle of the contemporary art orgy outside. The second room contained a row of speakers on the floor. When you approached them, a sensor would have activated a few bars from some long-forgotten soft-rock ballad. Installed above the speakers, a painting bearing the statement “He stepped on his fingernail.”

Conditional perfect constructions—”would have seen,” etc.—are used to evoke contingency (an “if/then” scenario) or an “unreal past”: a moment rooted in a particular yet hard-to-define moment previous to the one in which we speak. A moment that possibly never happened; you can never be sure, not by the words alone. Such words elicit a situation that is either hypothetical or somehow contrary to reality—”If someone had lived here, it would have looked like this.” The conditional mood, in its flirtations with unreality, suits Lee’s work. Both the “You (you).” project in Venice and a revised version presented in spring 2014 at the Cattle Depot Artist Village in Hong Kong, while naturally differing in their interactions with their respective environments, elicited a sense of the precariousness of time. What Lee is putting forth, with each successive exhibition, is a particular model of conditionality, a new possibility of being-in-space, which, of course, is also related to time.

Indeed, once you enter your studio, time becomes something truly other than the thing it is when you go about your day-to-day business; you can either lose track of its passage completely through a total immersion in your work, or else you can become painfully aware of its relentless, boredom—inducing constancy. For Lee, both of these options are available at once, as evidenced by the serial repetition of hand-painted shapes and lines that occupied him throughout his early career, when he also did performances and made sculpture, video and installations.

Born in 1978, Lee completed his MFA at the Chinese University of Hong Kong in 2009 and was a finalist for the Sovereign Asian Art Prize in 2009-10. In 2012, he won the Art Futures award at the Hong Kong Art Fair. Long a denizen of Fotan (Hong Kong’s equivalent of Bushwick), he then moved his main studio to the less expensive Taipei, Taiwan, another city with a testy relationship with the People’s Republic of China. He has been showing steadily since 2000, recently in group shows at Tate Modern, London; the New Museum and the Museum of Modern Art, both in New York; and the 2012 Shanghai Biennale. Although—or perhaps because—he grew up in a city that is notoriously crowded, frenetic and garish, his work is extremely spare, understated and modest—more in keeping with the literati ink-painting tradition than with the boisterous contemporary art of mainland China.

A strong concern for procedure clearly pervades Lee’s art and its presentation. To create the “Stories” series (2010), for example, he devised a joyfully convoluted methodology, here described by the artist in English (his second or third language) on his website (www.lee-kit.net):

• Find some images on internet or magazines;

• Paint / replicate the checker / strip fabric in the images;

• Use them in some daily occassions;

• Paint some cardboard paintings, with brands appeared in those found images / related to the use of hand-painted fabric;

• Use the cardboard paintings to wrap the framed fabric and framed photos;

• Deliver the wrapped framed photos and fabric to the gallery;

• Open them and hang the framed photos and fabric—and the cardboard paintings as well.

Bringing together the conditionality of time and space, the complications of working within these dimensions, and the underlying issues of painting, the young Lee seemed to be seeking a new type of narrative. The short text accompanying one “Stories” installation reads in full: “Mary and Linda, born in Japan and currently live in the States. One day they went picnic with friends, including Peter. Three of them enjoyed it so much and since then, they live happy ever after.” The composite artwork consists of four flat elements installed on a single wall: a painted cloth mimicking a picnic blanket with red crisscross lines; a flattened-out cardboard box with two commercial food logos painted on (Ruffles, Smuckers); and two found photos of friends at a picnic.

Eventually, this workaday approach evolved into what a large international audience experienced in Venice—implied narratives that are really too abstract to be stories, taking place in space, with only the most rudimentary linguistic signifiers to guide you in constructing your own tales. If I have relied heavily on the second person in this essay, it is only because I yearn to be a bit closer to the artist when perceiving his work, when parsing it through language; for Lee, the presence of a receiver, a listener, a viewer, a second person, a “you,” is always a mere possibility, an eventuality yearned for but—because it begins as pure potentiality—never completely relied upon. In this work, denuded of all personal subjectivity, the emphasis shifts away from autobiography to that possible agent, that imagined second person entering the room, who might create his own stories, or her own meaning, out of all this: you.

Given how it continuously provokes the receiver’s imagination, I would like to propose that Lee’s work, like ancient Chinese scroll painting, is a kind of writing. A writing in space. He attempts to use this writing, whose syntactical elements are the household objects and paintings and sounds installed throughout the exhibition space (the total space being the complete work), to somehow express the soul of those itinerant objects that are thus contained and that, despite their containment, are always speaking. “[Objects] have been my strange obsession since childhood,” says Lee. “Because they don’t talk. But to me, it seems like they keep talking.” 1 That discourse is the essence of the work. You, too, can hear the voices—the physical you that may have been there, some time ago, as well as the conditional you that, even now, is perhaps actively listening and, in your silence, becoming an object.

CURRENTLY ON VIEW Works by Lee Kit in “Material Analysis,” at ShugoArts, Tokyo, through Dec. 20, and “Beating Around the Bush,” at the Bonnefanten-museum, Maastricht, The Netherlands, through Feb. 8, 2015.