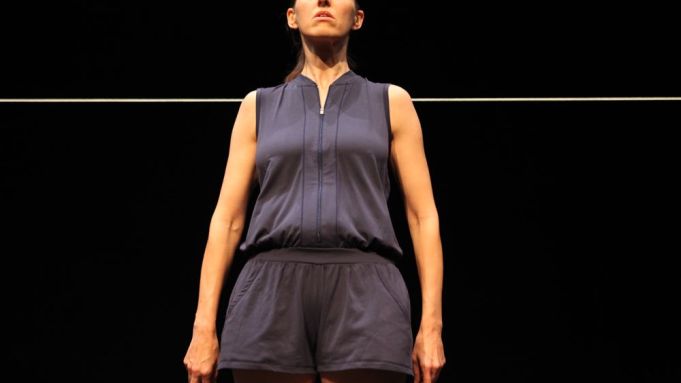 The jpeg is terribly low quality. Seen on the website of the Kitchen, New York’s foremost venue for multidisciplinary performance, and zoomed in to 200 percent, the gray lettering is still barely visible. Straining, one finds that the image depicts only text: 16 phrases written out in four quartets that merely describe rules for creating a hypothetical photograph. Directives range from the straightforward (“interior shot”), to the cloyingly poetic (“the image must include a secret”), and the self-consciously absurd (“must not contain an image of a refrigerator nor its parts”). Faced with the prospect of choosing a single press image to represent their work, the artists who performed at this year’s Dance and Process (June 7-8) elected to circulate in advance only this elliptical list of interdictions-a decision that captures the tone of their performances.

Dance and Process is one of the Kitchen’s longest-running programs. Inaugurated in 1995, the series alloys the familiar artist’s residency with the promise of structured feedback, pairing a group of emerging artists with an established choreographer. Typically, 10 weeks of productive exchange culminate in a presentation of the final work. This year’s participants—Kira Alker and Elke Luyten, Anna Azrieli, Moriah Evans and Yve Laris Cohen (with Sarah Michelson at the helm)—ably disrupted expectations about how this process should be exhibited.

A venerated institution in the world of experimental dance, Dance and Process is both an important platform for new artists and a reflection of the Kitchen’s commitment to supporting innovative work. While questioning the discipline’s conventions and limits is an established trope of avant-garde choreography, recent art world infatuation with dance has placed ever-greater pressures on the field. Michelson is central to this whirlwind romance, presenting celebrated work at New York’s Museum of Modern Art and in the 2012 Whitney Biennial, where her Devotion Study #1—The American Dancer won that year’s Bucksbaum Award.

It is unsurprising, then, that the artists Michelson worked with this year engaged not only issues of movement and phrasing, but also reflexively questioned context, presentation and the residency’s institutional structure. What exactly is “process,” after all, and how does one convey the subtleties of interaction and critique to an audience not privy to the whole thing?

The absent press image and its deliberately blurry textual substitute are the first attempts at answering such questions. Interrogations of legibility and access similarly pervaded the performances, split between two days of both matinees and evening shows. Printed programs listed only each work’s title, cast and a note of appreciation, offering no information as to the performance’s overall structure.

Consistency, in fact, was elided entirely; audiences on Saturday afternoon watched the work of Azrieli and Evans and were subsequently informed that was all for the moment. In the evening, all four dances were performed, but with a catch: from a corner and without much pomp, Cohen announced that his work would be shown upstairs. Those who wished to see it would not be able to watch anything in the main space. Four brave (albeit hesitant) volunteers were whisked away, leaving behind only quiet murmurs of speculation. Similarly opaque were the 25-minute caesuras between each piece.

While the audience was granted only a partial view of Dance and Process, some commonalities did emerge during the performances (A.i.A. attended several) that hinted, however tenuously, at the artists’ sustained collaboration. Each piece eschewed music and instead activated the stage and the performers’ bodies as sonic material. Alker and Luyten’s Death Drive was scored by the sound of hastening breath that accompanies Luyten’s brief solo. Having stretched a clothesline across the stage and secured it at eye level, Luyten planted her feet and rocked back and forth, escalating over a few minutes to an almost frenetic spasm before abruptly ceasing the motion.

During Evans’s trio, titled Variable Dimensions, the stage floor emitted a low growl upon contact with the performer’s heels and palms and the synthetic fabric of their jumpsuits as they rolled and twisted on the ground. Alternating between moments of taciturn slowness and wild tempest, Evans also engaged the space behind the audience with a racket of stomping from the rear of the venue.

Azrieli’s Averaging opened with an aquatic overture: the sound of water sloshing in the artist’s belly as she undulated on the floor, a quieter echo of Luyten’s convulsions. Surrounded by a number of water glasses, Azrieli performed a series of penchées, taking a sip of water before each pendulum-like movement and then spitting it out slowly as she raised one leg above her head.

A hypnotic metronome kept time in Cohen’s Thomas, another version of the repetitive pulsing that ran through the performances. In the dark, quiet space of the third-floor office a small audience, including A.i.A.‘s correspondent, listened and looked on as a flickering orange light illuminated Cohen, who sat nearly motionless behind a desk. His act of exclusion and intimacy most blatantly shattered any sense of consistency implied by a “group show,” but it seems that cohesion was never the point.

“Process” gained new importance in the art world lexicon with the loosely sculptural practice of the late 1960s (exemplary are Richard Serra’s props, lifts and splashes, on view only a block away from the Kitchen at David Zwirner Gallery through June 15). While Post-Minimal objects were heralded for rendering visible the effects of time, dance is necessarily durational and thus cannot abide by a linear relationship between action and trace.

The artists of this year’s Dance and Process recognize the occasional banality of process: its circumscription within institutional economies, its predisposition for conflict with audience expectations and its necessary incoherence. Simply recording and leaving traces of process or collaboration is no longer enough; one has to orchestrate its entrances and exits with all the dexterity of a skilled choreographer. Moreover, at times, one must be willing simply to let the process play out—as the artists concede in their press image: “you may disregard any three of the sixteen rules.”