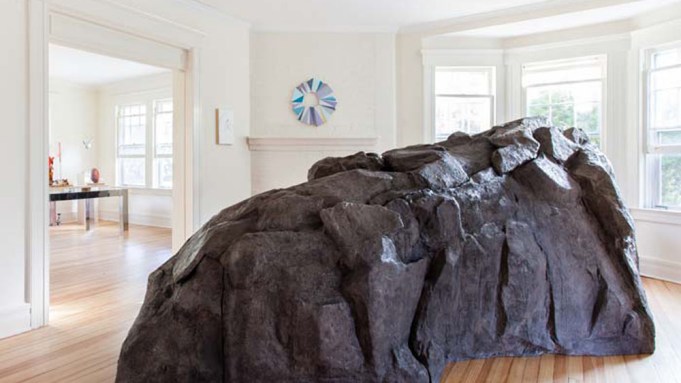 Most of the Long Island homes that sport expansive lawns dotted with sculpture and interiors packed with auction-worthy objects are the private property of the mega-rich. Most of them are in the Hamptons. This summer, Martos Gallery counters Hamptons exclusivity, offering an art-for-all extravaganza in the unassuming town of East Marion on the North Fork, where gallery owner Jose Martos and his wife, artist Servane Mary, recently bought a 1902 Victorian home on 14 lush acres. The fourth annual exhibition, organized, as in past years, by independent curator and critic Bob Nickas, is much larger than previous incarnations, which took place in Martos’s former Bridgehampton quarters. “Lat. 41° 7′ N., Long. 72° 19′ W”(through Sept. 2) includes 132 works of art by 66 artists, many of whom, like Barbara Bloom, Jacqueline Humphries, Eddie Martinez, Sam Moyer, Dan Walsh and Barry X Ball, live and work in the area for at least part of each year.

Some of the pieces situated in Martos’s funky fixer-upper and scattered playfully throughout the grounds are unmissable. John Miller’s mammoth untitled sculpture from 2011, a mass of insulation foam board sculpted to resemble a misshapen boulder, takes up the entire dining room, while Jim Lambie’s trademark vinyl ZOBOP (2000-13) covers the staircase floor with metallic, eye-poppingly colorful strips that interact merrily with the house’s original floral wallpaper. Mary’s installation, Untitled (The Green Room), 2013, transforms the basement into a dark underworld, with fluorescent water in the two deep sinks; menacingly sharp vintage implements hang on hooks set into one of several glow-in-the-dark walls. Aaron Suggs has contributed a working boat to previous Martos summer shows, and his variation for this outing is the deceptively minimal clear acrylic Untitled (Transparent Dinghy), 2013, which floats spectrally on the pond behind the house.

Other works barely register as part of the show, like Olivier Mosset’s effortlessly clever Exit Signscreenprints from 1995, installed so as to appear functional as well as discreetly aesthetic. A panoply of skillfully made yet endearingly childlike drawings, etchings and paintings by Bill Adams is stashed in the closet of Martos and Mary’s three-year-old son’s room. In the front yard, a tree with long, thin branches has been adorned by Peter Coffin with garishly tinted resin hands at the branches’ ends (Untitled Red, Orange, Yellow, Green, Blue, Indigo, Violet, 2013). They could easily be missed by momentarily unattuned eyes.

The exhibition’s title emphasizes the importance of locale, referencing the coordinates of Martos’s property. “It’s like a big park,” said Nickas by telephone last week. “The grounds here are so much more beautiful [than the former Bridgehampton site], and I’ve been going to this area every summer since 1986. The artist scene, or non-scene, is what I love there.”

T.J. Wilcox’s superb contribution, Orient (2013), is local to the max, elaborating on or inventing town lore in several sweet but not cloying vignettes over the course of a nearly 15-minute video shot and edited in a charmingly amateurish mode. One story concerning a flamboyantly decorated local inn (The Shady Lady, since shuttered) and the recently deceased psychic woman who owned it is told with tender humor in pseudo-documentary fashion via interviews with the woman’s eccentric family.

There is a palpable social aspect to the show, as Nickas put it, and the performance of day-to-day summer living goes on around the art. Many of the artists installed work personally and spent days as guests of Martos and Mary. “Jacqueline Humphries brought her painting [untitled, 2013], which she made just for the show, wet and dripping!” said Mary, and added, “Vito Acconci’s crew stayed nearly a week.”

“Many started to build things while they were here. They’d find objects in the basement, they’d go to the dump,” said Martos, sitting with Mary in his kitchen last week. Dan McCarthy, not officially part of the show, came to visit and ended up making the kitchen benches on which rest Jim Drain’s pastel-hued, abstractPainted Cushions (2013). McCarthy and others fished with Martos.

The sculptor Christopher Astley visited often, taking photographs of the property’s lawns and pond, which he later printed on canvas and incorporated into a rough pyramid of his signature concrete-filled canvas bags with sign paint. Astley’s other contribution is a constellation of small, loosely geometric resin sculptures, tucked into the fork of a skinny tree trunk. “He struggled a lot,” said Martos. “When it was windy the tree moved, so Chris had to rebuild and reinstall his piece. He was here a lot, in a heat wave, in a tree with few leaves, so no shade.” The result is the quietly bright Tree Nuffink (2013), which blends chromatically with adjacent lichen and weathered bark.

Several artists’ offerings vary from their regular practices. Jules de Balincourt, best known for paintings, shows table sculptures that Nickas said he came across in the artist’s studio.  Wayne Gonzales’s accomplished large scale painting Waiting Crowd (2013) is propped up in a shady copse just off the front lawn. “A hallmark of the show is that I ask artists with no history of doing work outside to do work outside,” said Nickas. “When I was in college I did commercial artwork, including outdoor signs,” Gonzales said in a telephone interview. Then as now, Gonzales utilized simple plywood and outdoor enamel sign paint. “I’ve never incorporated the materiality of a sign painting into my work before. It challenged me technically; I had to engineer the piece.”

The North Fork vibe is more artists’ commune than commercial enclave or Chelsea churn, which seems to suit the artists as well as the organizer. Andy Cross’s 9-foot-tall stainless steel ladder to nowhere on the side lawn is called Social Climber (2013).  “Social Climber speaks to the relocation of the show from the Hamptons,” said Nickas. “The North Fork is so much more laid back and the people are friendly. I’m happy with the move,” he said.”Now the show is where I’m comfortable.”

Nike Accuses Bape of Ripping Off Its Sneaker Designs