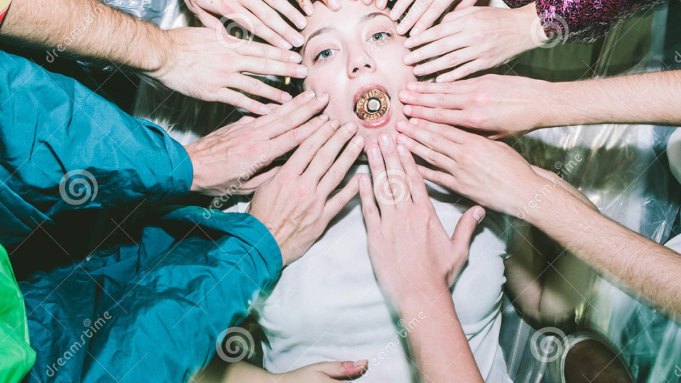 In a First Look profile for our June/July issue, Stephanie Seidel discusses how Miami-based artist Domingo Castillo engages the mythology surrounding his city and the use of these myths in real-estate marketing. Castillo “exposes the political forces underlying these images, grounding polygonal skyscrapers and sun-kissed beaches in the precarious present,” she writes. For our YouTube page, the artist has put together a playlist of videos that highlight independent film and music as influences on his worldview.  —Eds.

My YouTube account was terminated in 2016 due to my flagrant disregard for copyright. I had uploaded a large number of videos that raised several flags in a short period of time, thus ending my time on the site. Much of the material was already online but not easily accessible, for example, recent Hito Steyerl videos, Mark Kausler’s It’s a Cat (2004), Mathias Poledna’s Imitation of Life (2013), plus music videos I made for a Sun Ra lecture, an early Cosey Fanni Tutti release, and a Hood By Air runway show.

The termination has altered the way I use YouTube. Without playlists, a viewing history, or subscriptions, I have to find other ways to access the flow of content. This has actually made it much more productive to use YouTube as a place to gather material.

Instead of linking you to all the video game playthroughs, Marvel Cinematic Universe theories, and rap beef clickbait I fall for, I’d rather share media by people that continue to have an effect on my thinking and process. I’m interested in the fact that these videos are still available on YouTube, as well as how these artists move through the media and the persistence of their vision.

Elysia Crampton, “Ax Amores.” “This is an edit of my song ‘Axacan’ w the popular ‘Amores’ horn melody. This song is based on an oral history of my mother, as a child, traveling deep within the Yungas (cloud forest) to save my grandma’s life. I made the edit traveling the same road—traveling to a place founded by my family, a town called Santa Fe.” —Elysia Crampton, in an interview with the Fader.

For a few years now Elysia Crampton’s recordings and mixes have been some of the more compelling compositions in electronic music. She has an incredible ability to sculpt an intricate range of sounds and samples into a very personal and public expression of her experience of the world. The amores horn melody (originally from “Amores Como el Nuestros” by Jerry Rivera) employed in this recording is instantly recognizable to those of us who grew up with it. Crampton’s explicit use of this sample reminds me not of the countless times I’ve heard the tune but of the nostalgia lamentingly described in the original song.

James Baldwin, “The Artist’s Struggle for Integrity.” Two years ago the full recording of this talk was uploaded to YouTube. Before that, all I was able to find (on YouTube) was a five-minute edited excerpt. I’ve returned to this recording at least once a year since 2012. I find it an important artifact to share among comrades, artists, friends, and family. Baldwin speaks with great eloquence on the importance of artists. While this may sound a bit obvious, it’s important to remember that the work we do is powerful and has consequences in the real world. Just look at how entire cities hedge their futures on the redevelopment of art districts and creative communities.

Derek Jarman, Blue (1993). Blue is Derek Jarman’s final feature film. It consists of a single blue color filling the screen, as background to a soundtrack where narration by Jarman and some of his long-time collaborators describe his life and vision. This film can serve alone as a master class in filmmaking. The complexity surrounding something so structurally simple is breathtaking. The entire process took many years to finetune. The work went through a few iterations—in theater, radio, and installation—until it finally saw completion as a film. You can’t have a more beautiful film than this and I’m always at a loss for words when trying to describe it. Blue is a poem and it is surrounded by love.

Chris and Cosey CTI, Elemental 7 (Parts 1-5). CTI (Creative Technology Institute) is a project by Chris and Cosey, and their collaborators. The album Elemental 7 features John Lacey. Chris and Cosey co-founded the band Throbbing Gristle (with  Genesis P-Orridge and  Peter “Sleazy” Christopherson ) and they basically founded the industrial music genre. Before that, all four were a part of the performance art group COUM Transmissions. Chris and Cosey are a couple that welcome collaboration, performance, and experimentation. But what I find interesting is their positioning during this time. In the late ’70s and ’80s, the art market was being transformed by the rise of new class of financiers. Painting moved to the center of conversation after a period focused on performance and media. Meanwhile, artists around the world moved to music. Industrial, post-punk, noise, goth, no wave, and electronic music continued the art historical trajectories of the ’60s and ’70s and its practitioners experimented with all the available forms of media and distribution. This was the fifth release by Cabaret Voltaire’s Doublevision VHS/Record Label. Each of these early releases used the music video format and featured other artists like Tuxedomoon, The Residents, Throbbing Gristle, and Einstürzende Neubauten.

Sara Gómez, De Cierta Manera. Public Display of Professionalism, a project I run in collaboration with Natalia Zuluaga and Patricia Margarita Hernandez, recently screened this and other films at the Koubek Center in Miami. This is an amazing film that direly needs a full preservation. De Cierta Manera manages to weave a complex and striking critique of the Cuban revolutionary project as it relates to the construction of the social, gendered, and racial conditions on the island. The fictional love story is set on the site of critique, and documentary footage, street scenes, and historical analysis help shape a nuanced story of that place and of its people. As Sara Gómez says in the film’s opening credits, it is “a film about real people, and some fictitious ones.”

POORGRRRL, “F:):)K SONG [EXPLICIT].” Madonna’s “Ray of Light” was first released in 1998. The music video showed a frenetic world speeding across the screen in fast forward as Madonna slowly fades into view and then we find her in rapture on the dance floor. Twenty years later, we see POORGRRRL–singer Tara Long working with producer BYRDIPOP–revisiting the video as the backdrop for “F:):)K SONG [EXPLICIT],” a song that could be read as a protest against the music industry’s standards for female self-expression. POORGRRRL’s lyrics describe the anxiety of meeting expectations in private, public, sexual, and professional situations. The lyrics, which repeat on loop, say: “finally / finally fucking me and / you’re finally fucking me / and trapping me / and you’re disgusting / you wanna do it all the time.”

Claire Denis, Beau Travail (1999). This film is like a ’90s take on the ’70s genre of the no-exit film, which is just what it sounds like: a film with an ambiguous resolution, or none at all. Originally these films presented institutions such as intelligence agencies, media companies, and banks functioning with machine-like precision against the protagonist, who is trying to expose, infiltrate, or undermine them. The Parallax View (1974), All the President’s Men (1976), and Network (1976) are all classic examples, featuring characters with access to limited or incorrect information, as well as erratic juxtapositions of sound and visuals. In Beau Travail, like other no-exit films of the ’90s, the extremity of alienation is expressed through repetition, boredom, and themes of violence and suicide. The dreamlike film pays close attention to the physical, psychological, and erotic tension between two soldiers in the French Legionnaires stationed in Djibouti. It provides an experience of meditative complexity instead of narrative resolution.