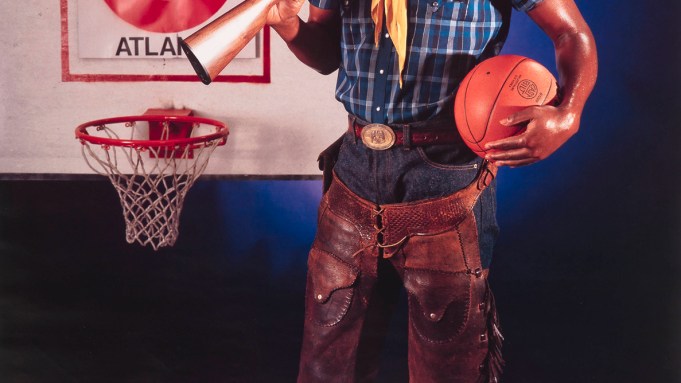 In the mid-1980s, comedy, athletics and graphic design found their perfect combination in the posters of John and Tock Costacos. “For the Kids,” a new exhibition curated by gallery director Fabienne Stephan and advisor Adam Shopkorn at Salon 94 Freemans considers appropriation—specifically the pop-comedic idiom of ’80s Koons—part of their formula.

The brothers, who first opened a T-shirt and sports  paraphernalia company, got their start in the early ’80s producing posters with a cold call to the Seattle Seahawks convincing football star Kenny Easley to do their initial campaign. They then produced hundreds of images that went against the industry standard of the time, which was to show athletes in action sequences. Instead, these iconic pros were given humorous personas as larger than life “superheroes” and paired with amusing taglines.

Dominant Oakland Athletics duo Mark McGwire and Jose Canseco dressed up as the Blues Brothers; the Costacos nicknamed them the “Bash Brothers” for their special high-five. The Indiana Pacers’ Chuck Person (“The Rifleman”) holds a basketball and a rifle, a bull’s eye in the background; Kenny Easley (“The Enforcer”) wears black leather as he patrols a sinister alleyway.

These examples and nearly 20 more mass produced lithographs from 1986-90 are currently on view. The curators chose to focus on this four-year period, because the kitsch esthetic changed considerably in the ’90s. Koons began his work with appropriation of sports imagery just a year before the Costacos Brothers emerged as pioneers of sports posters.

Koons has loaned posters from his 1985 debut solo exhibition at International With Monument in the East Village. The pieces are Nike advertisements that the artist purchased from the brand, after going to the manufacturer to see if he could use them as his own. In one, Stormin’ Norman (1985) we see a framed poster of Chicago Bulls great Norm Van Lier, riding through the composition on a thunderbolt, arm raised, basketball in hand with clouds revealing the Nike swoosh in the background; The Dynasty of 34th Street (1985) depicts a small group of basketball players. In a 2003 Artforum interview Koons said of this work, “I looked at the athletes in those posters as representing the artists of the moment, and the idea that we were using art for social mobility the way other ethnic groups have used sports. We were middle-class white kids using art to move up into another social class.” While it’s doubtful that Koons would be able to “collaborate” with a major brand so easily today, the artist’s appropriation of pop culture as a means of social commentary became integral to his practice.

Stephan told A.iA., “These posters are by far not Jeff Koons’ most famous body of work and yet, his radical gesture of appropriating a portrait created by Nike was genius. He picked up, at the time of it happening, on the rising phenomenon of the athlete as a pop star, something that the Costacos’ posters participated in creating.” Another connection between the Brothers and Koons (and Nike) is that they were presenting African Americans in a position of power and gave them the freedom to take on these fantasy personas that wouldn’t otherwise have been possible. “A lot of [the athletes] stepped off the pedestal that the fans and the kids placed them on to have a little fun, because in some ways it made them feel like a little kid,” remembered John Costacos.

He was unaware of Koons at the time, and never imagined his posters would be considered art. “For the Kids” reminds us of a more playful era and to take ourselves-and our athletes (LeBron James, anyone?)-a little less seriously.