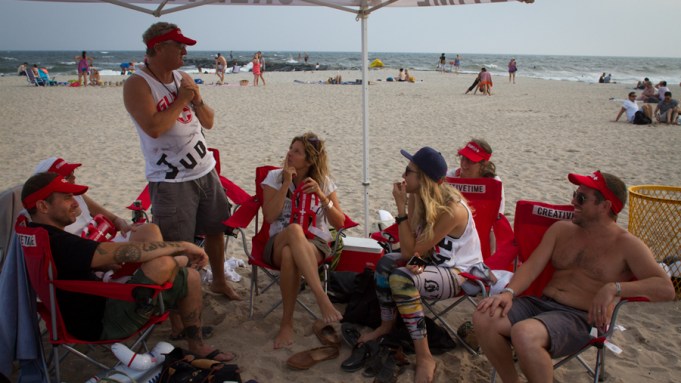 Sand began to fly just before three o’clock. Artists hauled buckets of water to irrigate their patch of sand; planks of wood were deployed to form support structures; the artists, intent on their projects, talked surprisingly little trash, but instead put their backs into their work.

Creative Time chief curator Nato Thompson, armed with a megaphone, served as affable emcee, commenting on castles in progress, inviting rounds of applause for the artists and eliciting art criticism from observers on the boardwalk, one of whom praised the topless women on the scene.

Some teams took traditional approaches, focusing on representational sculpture. Jen DeNike built a woman, slightly larger than life size, lying on her side in a bikini. From her head came a raised line of sand that led to a sand castle, as though it were being dreamt by a dozing sunbather. Shelter Serra constructed a castle just a few feet long, with several towers, surrounded by an empty moat. Mary Mattingly combined representation with sheer size, with a large mound of sand topped by a squat tower sporting a flag. Most impressive in the traditional category, to this observer, was Marie Lorenz’s detailed model of Rome’s Colosseum.

Rather than building up, some contestants excavated. Tom Sachs brought his customary macho, labor-intensive efforts to digging a hole about 12 feet deep. Observers would ask, with a chuckle, “What, is he digging a hole to China?” At about four, Sachs posted a sign on the mound of sand next to the hole that read, “China.”

Kenya Robinson and her team dug a hole but a few feet deep, in which she and several colleagues stood, building a spider web of string that imprisoned them. (“How are you going to get out?” an observer asked. “All these questions!” deadpanned Robinson.) The piece was called Female Prostate. “I had no idea women had a prostate,” Creative Time director Anne Pasternak told A.i.A.

Others went high-concept. Ricci Albenda and his team created a mound that from one side resembled the corner of a pyramid. The other side, facing the boardwalk, looked to have given in to entropy, but was actually carefully molded to create the look of a collapsed structure.

Two participants in Ryan McNamara’s piece became human sculptures, one of them upright and one lying down inside boxes bolted together to form molds for wet sand. Before the official judging time, to give these brave souls a break, the judges allowed the structures to be dismantled, the molded sand blocks to crumble, and the performers to be freed.

Several projects had more active performers and invited audience participation. Dustin Yellin’s team built a two-part castle that included a bowling alley with real bowling ball and pins made from soda bottles. The other half was a barbershop where team members cut visitors’ hair. The piece was titled Bowl Cuts.

Snarkitecture built a mound of sand in which they encased long, clear plastic tubes that were meant to allow viewing from one side of the structure to the other. This crowd-pleasing attempt excited the kids but since the tubes apparently bent under the weight of the sand, when I looked through at least, the goal seemed not to have been achieved.

Laura Wasserson and Amit Greenberg created a pyramidlike structure into the sides of which they carved stylized faces that recalled those on totem poles. As the judges came around, they played drums on buckets and danced as if in a tribal ritual in a remote jungle.

Jen Catron and Paul Outlaw collaborated, along with three other participants, all clad in stars-and-stripes bathing suits, in a human sculpture. Castle-shaped mounds of sand supported platforms on which the performers, armed with bottles of water and long straws, posed as human fountains, recalling Bruce Nauman’s Self-Portrait as Fountain, as well as his One Hundred Fish Fountain, now on view at Gagosian in New York.

William Lamson and his team brought the only purely formal, abstract effort. After using foot-wide strips of metal to create a ziggurat. (One participant cut his foot, requiring some medical attention; bloody water was used to wet the sand.) After removing the metal strips, the team employed an armature of two-by-fours that spun around the mound to shave its edges down until it created a perfect cone, inspired, Lamson told A.i.A., by a sculpture in a temple in Kyoto.

A.i.A. asked Thompson how the progenitors of Land art, like Michael Heizer and Robert Smithson, might react to their whimsical progeny. “They would hate this,” he admitted, with an air of humorous resignation.

At about 5:45, Thompson called time, and each team presented their results. The judges went to  work. They were Pasternak and Thompson along with ArtNews editor Robin Cembalest, Grey Area co-founder Kyle DeWoody, Creative Time curator Meredith Johnson, artist Duke Riley and former Artnet.com magazine editor Walter Robinson. DeWoody later told A.i.A. that the judging process, though brief and amicable, was not taken lightly: “There was some serious, critical judging going on.”

Though categories were not made explicit, the awards honored three kinds of efforts: the traditional, the abstract and the performative. Bronze shovel went to DeNike for her sunbather dreaming of a sand castle. Silver shovel was awarded to Lamson for his Japanese-inspired cone. Catron and Outlaw shrieked, bellowed and high-fived when they won the golden shovel for their human fountain. From the boardwalk-cum-podium, Outlaw hollered, “We love winnin’! And we love y’all!”