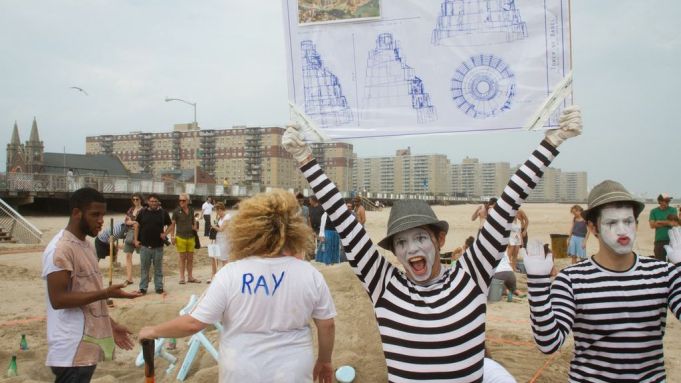 The threat of bad weather did little to dampen enthusiasm for Creative Time’s second annual sandcastle competition, held in Queens, N.Y., on Far Rockaway beach this past Friday. The boardwalk may be gone, and much of the beach is still closed as a result of Hurricane Sandy, but crowds were not deterred by an ominous forecast predicting an 80 percent chance of thunderstorms. The contest went ahead as scheduled, and the skies, although overcast, cooperated.

“We tried to get it to rain, so we could be champions for two years, but it didn’t happen!” joked Jen Catron, who won last year’s competition with Paul Outlaw for their human fountain. Returning as judges of the second edition, they were joined on the panel by Rockaway resident and MoMA PS1 director Klaus Biesenbach; designer and actor Waris Ahluwalia; and independent curator Dana Farouki.

When A.i.A. arrived on the scene, a third of the way into the three-hour building period, the competition, while good-natured, was clearly fierce. Creative Time’s chief curator Nato Thompson, equipped with a megaphone for his role as master of ceremonies, was loudly accusing competitor Duke Riley of bribing the judges with free food. Two employees from White Castle were handing out a Crave Crate’s worth of free burgers (100, to be precise) while Riley’s team constructed a replica of the fast food chain’s local branch, which had sponsored the artist.

When asked if he was worried that judges’ assessment of his carefully detailed sculpture might be negatively influenced by the work’s corporate origins, Riley likened himself to a NASCAR driver, insisting that “at this level of sandcastle building—the Wimbledon or Indy 500 of sandcastles—everyone is doing it.” He added that there was nothing in the rule book outlawing bribery.

Thompson, who provided color commentary throughout the event, later admitted that there are only two rules: no more than five people per team, and no power tools on the beach.

Various techniques were in evidence as the sandcastles took shape. Several artists packed wet sand into large, custom-built molds, with varying degrees of success. Riley used large sheets of plywood to create his rectangular restaurant, shingling the roof with sea shells before removing the sides to reveal straight, smooth walls.

For Jamie Isenstein’s comparatively sparse entry, her assistants spent most of the afternoon tamping down the sand in three column-shaped molds (one cylindrical, two cubic), dumping in sand and water and dancing on top as though grape stomping. Isenstein topped one column with ice, one with bubbles and the third with a live saxophone player.

Marc Andre Robinson had perhaps the day’s most ambitious project, with a mysteriously shaped mold that must have been 7 feet tall. After carefully filling the structure, which resembled a lifeguard’s tower, the team triggered a collapse when they attempted to unmold it. Robinson scrambled to recover, scaling down the original design to create a smaller “Jaws” shark head emerging from sandy waves. He called it “The Shark Whisperer.”

Most artists strayed from the medium’s traditional form. The duo called Ghost of a Dream (Lauren Was and Adam Eckstrom) relied heavily on plastic sandcastle molds around the edges of their plot, but the focal point was a boxlike hut wrapped in shiny silver paper built on a sand platform. As the end of the contest approached, the team members disappeared into the hut, then emerged in gold lamé bodysuits. They stood on the four corners of the platform and on top of the hut, wielding golden shovels and posing like trophies, declaring themselves victorious.

Many of the artists incorporated performance. Christopher Robbins and his team spent the bulk of their building time erecting a large curved wall carved with gears and other machine-like forms. The meaning of the structure, which was accompanied by a giant, bright orange lever, became clear only at judging time, as Robbins and his assistants donned hard hats and safety goggles to “operate” their machine, which transformed sand into pancakes. Team members moved sand and water along a short assembly line to what Robbins dubbed “the magic box.” There, the sand pancakes were exchanged for real ones (hidden in a stash behind the wall), which were placed on the lever and flipped high into the air.

The performance element of David Brooks’s entry was apparent from the start. His team members were dressed as mimes, and did little actual digging or sculpting. An easel showed a reproduction of Pieter Brueghel the Elder’s The Tower of Babel and plans for constructing it. Only the lower two levels ever materialized, and when the mimes pretended to place the final piece high in the air, they stumbled, fell and angrily smashed the existing sculpture.

As judging began, Rachel Owens and her team climbed into the cockpit of their giant whale-shaped boat. One local resident speculated that Owens was recreating Rockaway’s Whalemina, a mosaicked fiberglass whale from the Central Park Zoo and decorated by Geoff Rawling, which was lost during Superstorm Sandy. Owens denied any connection to the former local landmark.

Easily overlooked but emotionally resonant was Sebastian Errazuriz’s two-dimensional contribution. He poured water into the outline of a plane, the darkened sand becoming the shadow of a jet flying overhead (a common instance on the beach, given its proximity to JFK airport). Errazuriz asked viewers to consider how “planes are still contextually different for New Yorkers” even 12 years after September 11.

An impressive entry by Esperanza Mayobre also had political undertones. With her team of “white people working for a minimum wage,” the Venezuelan artist built a raft that appeared to be tied together by realistic-looking rope made from wet sand shaped in wax molds. Mayobre described her work as “a sand castle for big people” and a commentary on immigration from her native country and from Cuba.

As judging began at 5:00, the sun broke through the clouds, and the crowds grew, congregating around each entry as Thompson asked the artists to talk about their work. A flock of seagulls also gathered, attracted by the pancakes. The judges asked few questions, and, after conferring, relayed their decisions to Thompson.

Riley took third place for “Due Diligence in the Ways of Cultural Excess,” while Mayobre was awarded second for “Technical Excellence and Pure Beauty on the Beach.” The winner, in what Thompson described as “a testament to the sophistication of the judges,” was Isenstein, who received a $500 prize and the coveted golden shovel.

When A.i.A. spoke to the judges about their decisions, Ahluwalia alluded to “fisticuffs” during the deliberations, and Outlaw joked that “we all bowed to Klaus because he’s a very powerful man.” More seriously, he explained that Isenstein’s piece had won because “we enjoyed its self-destructive qualities.”

Biesenbach, meanwhile, denied swaying his fellow judges. “We took it very seriously, but then we also thought, let’s not take it too seriously.”