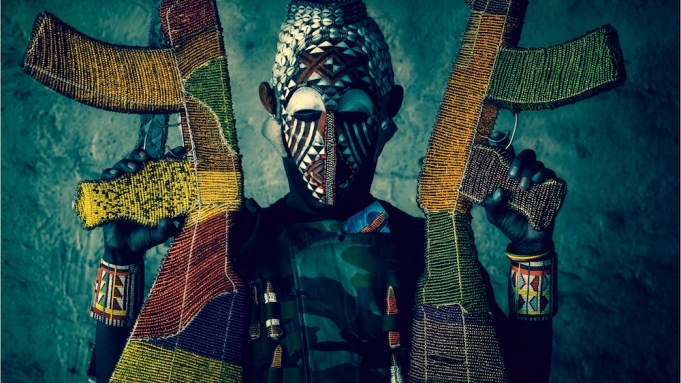 Johannesburg’s past haunts its collective consciousness and its landscape. Most strikingly, massive gold mine dumps, pallid yellow in color, dot the periphery of the central business district. Bespeaking exploitation of both labor and resources, these toxic heaps have become an emblem of the city that was spawned by the massive gold rush of 1886. The bright tailing piles have drawn the attention of documentary photographers such as Jason Larkin and Sally Gaule, but the city’s juxtaposition of glitter and grimness is not restricted to photographs. Just south of Johannesburg last year, in an industrial park in the shadow of the Ferreira Mine dump, LA-based artist Ralph Ziman directed some fifty skilled African artisans in the task of meticulously beading nearly every external surface of a Casspir.

These hulking armored personnel carriers were one of the most visible incarnations of South Africa’s repressive apartheid government (1948–94). The Mine-Resistant Ambush Protected Vehicles (MRAPs) embodied state-sponsored violence; police and military forces used them to target African township dwellers and attack “terrorists” (aka anticolonial liberation fighters) during the 1966–88 cross-border war in South West Africa (now Namibia) and Angola. Casspirs were locally produced. Due to international sanctions, South Africa had to engineer much of its own military hardware, and the vehicle’s name combines the acronyms CSIR (Council for Scientific and Industrial Research) and SAP (South African Police).

The name is key to one of William Kentridge’s most disquieting works, Casspirs Full of Love (1989/2000), a hallucinatory drypoint etching that depicts seven human heads crammed onto shelves. The image’s enigmatic title comes from a radio broadcast in which an anxious mother once sent this bizarre greeting to her soldier son. In the 1980s, Casspirs were routinely foregrounded on posters designed for the End Conscription Campaign, part of the national anti-apartheid struggle. One noteworthy example, featuring a spot-on rendering in the style of Roy Lichtenstein, shows a bewildered soldier standing over a body, while his thought bubble reads, “He doesn’t look like a terrorist . . .”

Ziman’s venture—encompassing design, fabrication, and display—is known as the “Casspir Project.” A small rectangle just below the beaded vehicle’s radiator reads “Spoek 1.” Ziman explains that an Afrikaner wandered into the workspace one day and reported that he had driven a Casspir while on active duty. The man claimed that soldiers dubbed these personnel carriers spoeks, which means “ghosts” in Afrikaans, as a riff on Casper the Friendly Ghost. Ziman believes, however, that the choice was clearly meant to increase the MRAPs’ intimidating effect, since the shades of ancestors—sometimes benevolent and sometimes malicious—constitute an important element in the cosmology of many black South Africans.1

The looming four-wheel-drive Casspirs weigh approximately eleven tons, stretch over twenty-two feet long, and stand more than nine feet high. Ziman’s vehicle is emblazoned with swatches of color extending from the cab roof down to the tires, spanning the shooting ports to the axles, and enveloping the steel outer body as well as portions of the interior troop compartment. His goal was to generate a Pan-African style, thereby indigenizing a reviled symbol of tyranny. Some of the beaded panels echo traditional Zulu, Ndebele, and even East African Maasai patterns and hues; other sections display three-dimensional motifs in a more contemporary palette. Imagine a mash-up of American artist Odili Donald Odita’s bright geometric murals and M.C. Escher’s perceptual experiments. For a militaristic parallel, one might think of Venezuela-born artist Carlos Cruz-Diez’s contribution to the 2014 Liverpool Biennial—a pilot cutter repainted in the “dazzle ship” mode of glaring camouflage first developed during World War I.

Ziman’s crew of female South African beaders and male Zimbabwean wire fabricators worked six days per week for about six months. Ziman created the original design using a 3D computer model whose schema remained posted on a wall at the production site. But the team continually reworked the plan as both practical and artistic challenges arose. The project consumed over 1,300 pounds of small-gauge imported glass beads. It thus recalls, in some ways, the artistic efforts of American artist Liza Lou, who moved to Durban, South Africa, in 2005 and now works with a group of approximately fifty local women beaders (see A.i.A., “Backstory,” January 2017). Particularly germane is Lou’s huge sculpture of chain-link fencing covered with silver beads, Maximum Security Fence (2007–08). The sparkly beauty of the piece partially distracts viewers from the terror of enclosure and the bodily danger posed by the barbed wire that tops the work.

In attention to detail and sheer density of decoration, Ziman’s Casspir is like a magnified version of an object-encrusted memory jug, a Western folk art form of African origin. The entire fabrication process has been recorded by cinematographer Nic Hofmeyr, who previously filmed Miners Shot Down (2014, directed by Rehad Desai), a powerful documentary about the Marikana Massacre, in which South African police opened fire on striking platinum miners in 2012, killing thirty-four. Hofmeyr now intends to travel to each site where the work is exhibited in order to capture reactions from three audience segments: soldiers who previously commanded or rode in Casspirs, Africans who once confronted the vehicles, and those who are too young to have ever encountered these fortresses on wheels.

Ziman is South African by birth but left the country in 1981 after being called to report for military service, which was mandatory for all white men. A pacifist, he refused to support the racist state. Although he eventually made a new home in the United States, he has not acquired American citizenship and adamantly resists being labeled a “former” South African, asserting emphatically: “I’m always an African no matter where I am.”

Ziman’s creative trajectory has been unconventional. An award-winning director of music videos for major pop stars, he gradually became a writer/director of feature films. His best-known movie, Gangster’s Paradise: Jerusalema (2008), is a harrowing story, based on actual circumstances, that highlights the hijacking of residential buildings in the center of Johannesburg by heavily armed gangs that force tenants to pay rent directly to them, rather than to the legal owners.

More recently, Ziman has found himself attracted by the individual autonomy of art-making. The thread that connects his work in all fields is the examination of violence. His idea to bead a Casspir evolved directly from an earlier collaborative project, “Ghosts” (2013). Profoundly disturbed by the global arms trade that nurtures conflicts throughout Africa, Ziman hired half a dozen Zimbabwean economic migrants to fashion life-size replicas of AK-47s.

These individuals, drawn from a population of two to three million displaced Zimbabweans now in South Africa, ordinarily sell touristy sculptures of animals, fashioning wire armatures on which they then thread strings of beads. Craftsmen such as these are a common sight at certain Johannesburg intersections. Before Ziman recruited them, they were selling their wares directly across the street from one of the most prestigious art galleries in the city.

“Ghosts” addressed the AK-47 as an object fetishized throughout Africa, an enduring symbol of anticolonial liberation struggles. In fact, the weapon appears on the flag of neighboring Mozambique, as well as on the coat of arms of Zimbabwe. In proxy conflicts during the Cold War, the Soviet Union and China furnished AK-47s to rebel movements in both these African countries. Ziman’s vibrantly colored facsimiles, mocking left-over “warrior” fantasies, glammed up these weapons to subvert their aura of power and menace. The artist made photos of men posing with the guns in various locales, put up street murals (some portraying the rifles as made of paper money), and eventually presented the sculptures and photographs in a gallery exhibition in Los Angeles. He apportioned the profits to Human Rights Watch, other NGOs, and his team of salaried craftsmen.

When Ziman located the rusted-out 1980 Casspir, it required a complete reconditioning, inside and out. Representatives from the South African Defence Department soon turned up to inspect the vehicle and the warehouse. Was Ziman purchasing the MRAP for ISIS? Was it roadworthy? Ziman was quickly cleared of any association with insurgents, and two of the artisans undertook intensive training that certified them to repair and drive the Casspir. In the end, the officials endorsed his project; the vehicle has been formally reclassified as a sculpture.

Casspirs were mothballed in South Africa after the first free elections in 1994, but they gained popularity elsewhere. US military forces adopted their own versions of the vehicle in Iraq and Afghanistan, and more recently giant SWAT personnel carriers have entered the arsenal of local American police forces. They now form part of the debate over the militarization of domestic law enforcement. Ferguson, Missouri, is one of the places where MRAPs have been deployed.2

On the day I got my first view of the production of the “Casspir Project,” Ziman and I later set off to eat lunch in the central business district. Even though four people were riding in the car, we were ambushed by a gang that demanded our cell phones and cash. Once we were able to move on—minus some valuables but with no injuries—we mused that perhaps the safest way to navigate downtown Johannesburg these days would be, ironically, in a gigantic military relic.

The first public showing of the “Casspir Project” was on the plaza outside the Iziko South African National Gallery in Cape Town. The work appeared from December 15, 2016, to March 31, 2017, in conjunction with the exhibition “Women’s Work: Crafting Stories, Subverting Narratives,” which included twenty-three individual male and female artists and five women’s cooperatives.

The “Casspir Project” debuted at a time when accusations of cultural appropriation—coming from a younger generation of black artists, critics, academics, and museum personnel—are plentiful in South Africa. Heated debates have erupted in the museum world, for example, over the suitability of white curators presenting and interpreting traditional African artifacts. The aestheticization of violence is an additional hot-button issue. Yet these topics remained in abeyance last winter, as the Casspir—with its joyful color scheme, imposing presence, and clear antiauthoritarian message—became a crowd-pleaser.

Casspirs in their heyday evoked anger, dread, and seething resentment. These behemoths remain formidable, although memory of them is negligible among the post-1994 “born free” generation. But Ziman’s elaborate embellishment destabilizes the brute force that this war machine once projected. Working the frontier between allure and peril, his “Casspir Project” is tantamount to forcing a bully to don a frilly frock.

1. All statements attributed to Ziman are from conversations and email exchanges with the author, December 2016–February 2017.

2. See, for example, Alex Johnson, “Obama: U.S. Cracking Down on ‘Militarization’ of Local Police,” May 18, 2015, nbcnews.com. Local and state police departments across the country have received surplus military equipment via the 1033 Excess Property Program of the Department of Defense.