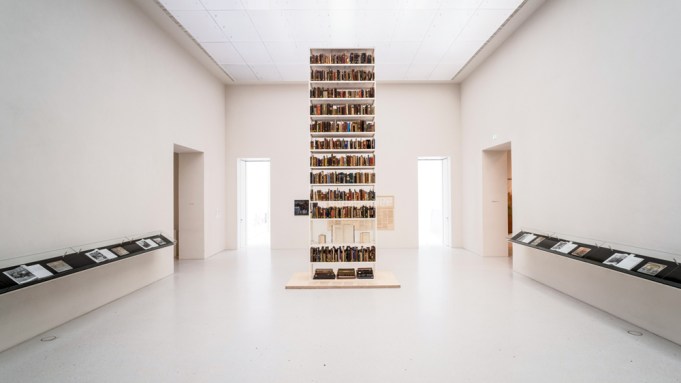 LOOTED ART IS everywhere in the Kassel portion of Documenta 14, posited as something like the uncanny double of today’s globe-trotting artworks. Networks of international circulation are central to the functioning of the contemporary art world, and Documenta is a key node.

Artistic director Adam Szymczyk originally intended for the centerpiece of the Kassel exhibition, which takes place in over thirty venues throughout the city, to be the Gurlitt collection, a trove of stolen artworks amassed by Nazi art dealer Hildebrand Gurlitt. Discovered in the Munich apartment of his son, Cornelius, in 2012, the hoard came to public attention around the time Szymczyk began preparing the show, and he wanted it to occupy the entirety of the Neue Galerie. Ultimately, Szymczyk was unable to secure the loans. Instead, a portion of the museum is given over to Maria Eichhorn’s “Rose Valland Institute” (2017), a research project named for a French art historian who secretly documented the Nazi theft of cultural items during the German occupation of Paris. Devoted to the study of ongoing restitution claims, the project includes an installation of books that were stolen from Jewish owners but still remain in German libraries. The curators invoke the Gurlitt collection obliquely via two Romantic landscapes of the Acropolis by Cornelius Gurlitt’s great-grandfather, the nineteenth-century Düsseldorf painter Louis Gurlitt, triangulating Nazi plundering, the origins of the modern German state, and its neocolonial relation to Greece in the present.

But, of course, the act of expropriating artworks wasn’t exclusive to the Nazis. Also in the Neue Galerie are several Benin Bronzes depicting royalty and dignitaries, just three of the roughly four thousand objects looted from the Kingdom of Benin by British soldiers in 1897. The artworks were subsequently sold to museums across Europe. Pointedly juxtaposed with these examples are a number of marble Neo-Classical statues (dated 1876–82) by the German sculptor Carl Friedrich Echtermeier; drawn from the Neue Galerie collection, they allegorically represent what the artist considered “nations of art,” all of them in Europe. As evidenced by displays throughout this venue, the forced relocation of objects and resources was a foundational element of the Enlightenment project and, in turn, central to the development of German national identity and culture, embodied by the institution of the public museum.

At the center of Friedrichsplatz, historically the city’s ceremonial center, stood Marta Minujín’s Parthenon of Books (1983/2017), a replica of an Athenian temple composed of censored volumes. The polemical move of splitting Documenta 14 between Kassel, its traditional home, and Athens pervades the entire exhibition, as indicated by its vague overarching title, “Learning from Athens.” But what, exactly, is being learned, and by whom, never becomes clear: Szymczyk and his curatorial team gesture toward weighty ideas and themes—restitution, debt, migration, the long tail of colonialism—without fully embedding them into the narrative of the exhibition in a way that feels necessary or convincing. Simultaneously overbearing and incoherent, the show too often instrumentalizes the artworks, treating them like bullet points in the scattered outline of an argument.

The curators describe the Neue Galerie as this Documenta’s “historical consciousness,” and its eclectic array of historical artworks, archival documents, and artifacts—positioned as a kind of theoretical scaffolding for the whole exhibition—exemplifies the fundamental weakness of Szymczyk’s approach. The problem isn’t the quality of works, which are often surprising and exquisite. Of particular note are Andrzej Wróblewski’s haunting painting Surrealist Execution (Execution VIII), 1949, which registers the trauma of wartime violence through nightmarish figural distortion; the intricate abstract patterning of Replica of a Chip (1994), Navajo artist Marilou Schultz’s woven depiction of a computer chip, commissioned by the Intel Corporation; and Geta BrÄ?tescu’s video Automatism (2017), in which a man walks the length of a room slicing through sheets of paper blocking his passage, a belated realization of a project first conceived by the artist in 1974. All of these, and many other works in the show, deserve a more central place in the art historical canon.

But the logic behind their selection and arrangement alternates between frustratingly opaque and hyperliteral, with any number of artworks included only to illustrate abstract concepts. Take, for instance, the two early Florentine Renaissance portrayals of the hermit St. Anthony Abbot shunning gold (one painted by Niccolò di Pietro Gerini and the other by Giovanni di ser Giovanni Guidi). Situated near the exhibition’s entrance, they were chosen, according to the wall label, because of their “topical” relationship to current concerns about wealth and inequality. There are also numerous books and manuscripts placed under glass, where they can be looked at but not read. Among these are the Polish constructivist WÅ?adysÅ?aw StrzemiÅ?ski’s annotated typescript for Theory of Vision (uselessly accompanying his 1949 painting Afterimage of Light: Landscape); Samuel Beckett’s 1936 travel diary, which, we are told, describes his travels throughout Germany, including Kassel; and a copy of Le Code Noir, a French legal document formalizing the institution of slavery in the Louisiana colonies. A book enclosed in a vitrine illuminates nothing for the viewer, merely pointing to the existence of an idea and telling us that it is curatorially significant.

Displays in the show’s smaller venues—several of which, selected for the first time, are located in Nordstadt, home to many of Kassel’s immigrant communities—largely took their organizational cues from the functions and histories of the buildings themselves. The exhibition guide refers to the Neue Neue Galerie (as Szymczyk and his team christened the disused Neue Hauptpost, the city’s former central post office) as “a nexus of distribution,” thematizing the show’s purported two-way exchange between Kassel and Athens. The works here are mostly new commissions that meditate on communication and migration. Otobong Nkanga’s Carved to Flow (2017), for example, is a multipart project in which black soap produced in a laboratory installation in Athens is created with ingredients sourced from the Mediterranean region, the Middle East, and West Africa, and then sent to Kassel for storage and display. The Ottoneum, housing the city’s natural history museum, contains riffs on the anthropological gaze, mostly by non-Western artists. Khvay Samnang, who lives in Phnom Penh, presents the three-channel video Preah Kunlong (2017), which is based on his extensive engagement with the indigenous Chong people from Cambodia’s southwestern forests. Nearby, Nomin Bold’s brilliant paintings draw on Central Asian pictorial traditions to depict contemporary life in her native Mongolia. The display at the Grimmwelt, a new museum devoted to the Kassel-born Brothers Grimm, reflects on the relationship between language, mythology, and nationhood via works like Susan Hiller’s video Lost and Found (2016), an archive of endangered languages.

The most dramatic of Szymczyk’s curatorial moves in Kassel, turning over the Fridericianum to the collection of Athens’s National Museum of Contemporary Art (EMST), is also its most hollow. Presumably intended as a gesture of solidarity and community, it serves mostly as a reminder of how few of these artists would otherwise find their way into a prestigious international event like Documenta. Moreover, in isolating the Athens collection in its own sub-exhibition, “Antidoron,” curated, it should be noted, by EMST director Katerina Koskina rather than the Documenta team, the organizers treat the works like sociohistorical curiosities—contemporary art according to Greece—rather than as full participants in the Kassel show.

Over the past two years, Szymczyk has regularly insisted that his aim is to resist the spectacular quality that so frequently characterizes global biennials and the like. But the installation of the EMST collection in the Fridericianum is a superficial spectacle at its core, in spite of its spare and dour aesthetic. The same might be said of the entire Documenta 14, which requires a plane trip—preferably on official partner Aegean Airlines’s exclusive Kassel-Athens route—to be viewed in its entirety. For an exhibition that purports to learn from Athens—a stand-in, it seems, for the entire global South—it has strikingly little to say about the actual geopolitical and economic conditions undergirding its own execution, namely that moving freely between European capitals is possible for only a privileged subset of the world’s population holding the right passports. I suspect Szymczyk’s team is painfully aware of this irony; but they seem to think that it is sufficient to treat the dislocation as a comment in itself, invoking the dilemma of migration through a divided exhibition that is perversely rendered doubly inaccessible.

RACHEL WETZLER is a writer based in New York.