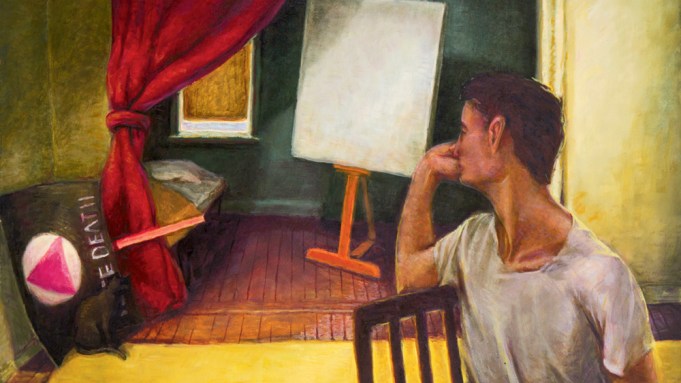 The course of American art history was irrevocably changed by AIDS, both through lives lost due to government inaction and through the development of new artistic strategies in response to the crisis. “Art AIDS America,” a traveling exhibition originating at the Tacoma Art Museum in Washington, surveys thirty years of American art rewritten by AIDS. The show—which includes 125 works (some of them seminal) by artists such as Felix Gonzalez-Torres, Robert Gober, and Nan Goldin—creates a picture of a pioneering movement whose legacy is evident today.

Organizers Rock Hushka, curator at the Tacoma Art Museum, and Jonathan D. Katz, director of visual studies at the University of Buffalo, N.Y., clearly aim to broaden the often reductive category of “AIDS art.” While there have been art exhibitions about AIDS activism in the past, the ambitious gambit of “Art AIDS America” is to position the crisis as a “generative force,” and to highlight those artists who took it as an impetus “to think about their representational practices first and foremost strategically.” 1 This more interpretive category includes artists often associated with other concerns, such as feminist artists like Judy Chicago, Barbara Kruger, and Jenny Holzer, and African-American artists like Glenn Ligon and Kalup Linzy whose works are often analyzed in relation to race, in order to more comprehensively map AIDS’s impact on art.

Most of the works in the exhibition were produced during the 1980s and ’90s and conjure a time when the role of art was a constant subject of debate. Larry Stanton’s Untitled (Hospital Drawings), 1984, is a series of small, hastily composed crayon drawings declaring i’m going to make it and life is not bad. death is not bad. Hugh Steers’s painting Poster (1990) depicts a man looking back, perhaps in a moment of choice, at an untouched canvas and an activist sign leaning against the wall. Mark Morrisroe’s self-portraits document his bodily breakdown in a series of Polaroids. These moving depictions of personal struggle capture a sense of urgency that empowered some artists while overpowering others, who nonetheless confronted the immensity of the problem head on.

But other works, like Gran Fury’s installation Let the Record Show (1987/2015), function as “boundary objects,” to use a term introduced in a 1989 paper by sociologists Susan Leigh Star and James R. Griesemer to describe how objects can have “different meanings in different social worlds” while maintaining a “common structure” across them. 2Let the Record Show is exemplary in this regard. Designed for the ground-floor window at New York’s New Museum, it is on view in “Art AIDS America” for the first time since 1987. The installation communicates a barrage of shocking statistics. Facts and figures scroll across a red LED screen, telling the story of Ronald Reagan’s homophobic neglect. Above a pink triangle—the symbol used in Nazi concentration camps to mark gay men—neon letters spell out silence = death. Transposed from window to gallery, the faithful re-creation at the Tacoma Art Museum activates Let the Record Show’s newest and perhaps most unlikely role as an unambiguous work of art.

Hushka, writing about the installation in the catalogue, links the idea of “going viral,” a term coined at the height of the AIDS crisis, to Gran Fury’s media campaigns. “The collective deftly manipulated the technologies and networks of their day and inserted AIDS into conversations within the rarefied art world,” Hushka writes. “Their call to action and images moved through communities like a contagion, specifically like a retrovirus.” 3 His reading of Gran Fury adheres to their stated ideology of “using the art world” but “not making art.” 4

The pink triangle graphic was originally designed by a separate organization, the Silence = Death Project, and lent to the AIDS Coalition to Unleash Power (ACT UP). Gran Fury, which served as ACT UP’s propaganda wing, then incorporated it in Let the Record Show.[pq]Artist-activists cared less about ownership of ideas than they did about social effectiveness.[/pq]Art historians Douglas Crimp and Adam Rolston have given this as one example of the fluid, sometimes irregular, and often simultaneous membership in artist-activist groups of the time. 5 Artist-activists cared less about ownership of ideas or formal originality than they did about social effectiveness. They co-opted Kruger’s iconic style and the advertising tactics of the United Colors of Benetton with equal ease. While their interest in representational strategies, like that of Kruger and other Pictures Generation artists, was often informed by feminist theory, artist-activists working during the AIDS crisis were more likely to play out their practices in public using the methods of political protest.

Others preferred to hide their AIDS art in plain sight. “I want to be like a virus that belongs to the institution,” wrote Gonzalez-Torres. “All the ideological apparatuses are, in other words, replicating themselves, because that’s the way culture works. So if I function as a virus, an imposter, an infiltrator, I will always replicate myself together with those institutions.” 6 In the exhibition, Andres Serrano’s photographic prints hang next to Gonzalez-Torres’s work and employ a similar strategy of “passing.” Milk/Blood (1989) and Blood and Semen III (1990) refer to HIV-carrying fluids in their titles, but the abstract images can look apolitical, even visually conservative. Thus camouflaged, they slipped past the censure of Senator Jesse Helms (who had earlier condemned the artist’s Piss Christ, 1987) and other right-wing politicians who were influential in the cancellation of NEA funds for art exhibitions perceived as indecent.

For Untitled (Buffalo), 1988–89, David Wojnarowicz photographed a diorama showing bison falling off a cliff at the Museum of Natural History in Washington, D.C. His work draws parallels between the government’s treatment of gays during the AIDS crisis and the slaughter, and near eradication, of American bison in the 1800s. In their paper, Star and Griesemer analyzed museum exhibits much like the one Wojnarowicz photographed. They found that these boundary objects cater to the independent and often contradictory informational needs of museum workers and visitors. The concept of the boundary object is useful for describing the nature of interdisciplinary institutions, as well as artists whose work concerns itself with ecologies and networks rather than individuals.

Jenny Holzer’s “Survival” series (1983–85) consists of mass-produced objects whose packaging features unexpected texts. In the exhibition, condom wrappers bear snippets of a dead-end monologue: protect me from what i want, men don’t protect you anymore, and in a dream you saw a way to survive and were full of joy. The voice in these texts speaks variously for, to, and about the viewer. Art historian David Joselit has pointed out the conundrum this creates: “By holding authorship in suspension, Holzer forces the viewer/reader into the position of evaluating and adjudicating often contradictory points of view.” 7 In addition to suggesting a literal boundary between bodies, Holzer’s condoms hold vastly different meanings, depending on one’s proximity to the AIDS crisis—an impression intensified by the shifting voice of the slogans printed on them. In the context of this exhibition, they evoke situations of ambiguity in a world that is inhabited both by people whose lives are consumed by AIDS and by others who are unaware and unaffected.

Gonzalez-Torres’s sculptural installation “Untitled” (Water), 1995, composed of hanging blue, white, and silver strands of beads, spanned one of the Tacoma Art Museum’s main passageways, creating a border between “Art AIDS America” and the rest of the museum. A viewer who chose to walk through the curtain first had to overcome the minor sacrilege of touching an artwork, in a small but courageous act that brings to mind the uninformed fear of contracting HIV from skin-to-skin contact. “Untitled” (Water) hangs on you as you cross through it and dramatizes the experience of passage. Though the piece itself contains no direct references to AIDS or exhortations to action, it reminds both passersby and the passers-through of their positions as insiders, outsiders, or something between. Like Holzer’s “Survival,” Gonzalez-Torres’s piece emphasizes interchange by activating a boundary.

Telling history through art’s encounter with AIDS is a big task, and some have argued that in “Art AIDS America” it has only just begun. In the exhibition’s catalogue, Sur Rodney (Sur) warns against limiting the conversation about AIDS to the “pre-cocktail era,” before retroviral HIV drugs became available in 1996, and thus obscuring the ongoing struggle of people living with AIDS in a time when activist fervor and institutional interest alike have waned. 8 This exhortation hit home during the show’s run when Tacoma-based artists Chris Jordan and the Tacoma Action Collective pointed out the paltry representation of artists of color in the show. The demonstrations and discussions they led in protest carried out the spirit of direct political action set by the show’s historical examples, challenging the implication that such activism is only a thing of the past.

The issue of underrepresentation is one of profound relevance to this exhibition because it points to a deeper problem of disintegration and unresolved commitments. Star and Griesemer’s notion of how heterogeneous groups work in tandem, exemplified by artists and artist-activists brought together via the AIDS crisis, is worth revisiting as a key to a rich history and as a mandate for the present. Perhaps this is why a show like this and the boundaries of contact it may yet create are relevant to a world that is always already sorted, where it is ever more difficult to encounter something that wasn’t made for someone like you.