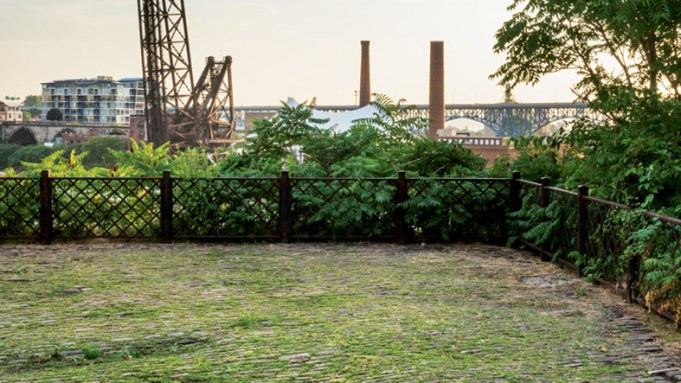 INITIATED by Fred Bidwell, a major patron of the arts in Cleveland and Northeast Ohio, and led by creative director Michelle Grabner, a longtime supporter of artists from the Midwest, the inaugural edition of the sprawling Front International: Cleveland Triennial for Contemporary Art aspired to create a Documenta on the shores of Lake Erie. The project—which was on view July 14–September 30—was organized under the ambiguous banner “An American City” and structured around the rubric of “Eleven Cultural Exercises” (a frustratingly ill-defined concept). There was a decided, and at times, defiant emphasis on place, which in this context was at once Cleveland, Northeast Ohio, and even the Midwest—a categorical slipperiness that reflected the disquieting air of instability that suffuses the United States.

It was difficult to determine which aspects of the Triennial were Grabner’s and which came from the curators of the participating institutions, including the Cleveland Museum of Art (CMA), the Museum of Contemporary Art Cleveland, the Akron Art Museum, Oberlin College, and other venues throughout the region. (The firing of Jens Hoffmann as co–artistic director in November 2017, presumably for the sexual harassment allegations that prompted his dismissal from the Jewish Museum in New York, did not help clarify matters.) In her catalogue essay, Grabner avoids an overarching thesis. Her hesitance is a nod to the monumental challenge of organizing the presentation of 110 artists at twenty-eight venues, and it allows her to avoid being ideologically pinned down. She stresses the initiative’s lack of “hierarchy” and its many “constellations” of themes. And yet, despite the rhetoric of fluidity, Cleveland itself continually emerged as the exhibition’s focal point. Much was said about the city’s former glories and its Rust Belt history, and especially about its urban landscape dotted with the ruins of modernity. Many works in Front responded to this legacy, and it was implied that such projects possessed a greater degree of moral clarity than those created with an eye toward the omnivorous international art market.

Fittingly, Cleveland native Allen Ruppersberg was featured at the CMA with Then and Now (2018), an installation of cityscape photographs taken from the platforms of advertising billboards, offering viewers the broad urban perspectives commanded by the the massive signs. Ruppersberg hung these pictures over wallpaper adorned with large-scale images of the backs of billboards, which appear rusted and dilapidated. Other artists offered more concrete representations of Cleveland’s unique built environment. Luisa Lambri’s series of black-and-white photographs documents the formal aspects of the CMA’s education wing, a 1971 Brutalist expansion designed by Marcel Breuer. In the same gallery, Marlon de Azambuja installed Brutalismo—Cleveland (2018), an abstracted skyline constructed from concrete blocks of various shapes and sizes held together with metal brackets. The primacy of Cleveland’s architecture within the triennial was further emphasized by Canvas City, an ongoing program of mural commissions inspired by a previous project, City Canvases, initiated in 1973 with a mural by Julian Stanczak that was re-created for Front. Kay Rosen’s text-based mural DIVISIBILITY (2018) was on view over the summer, and works by Odili Donald Odita, Sarah Morris, and Heimo Zobernig will appear throughout the year.

The complex lives of urban spaces were the subject of several works shown at the Akron Art Museum. Examples include Katrín Sigurdardóttir’s photographs of paving blocks made in Iceland and installed in Cleveland, and Nicholas Buffon’s paintings of prominent LGBTQ bars and public spaces in New York and Akron. For After Willis (rubbed, used and moved) #010 (2017), Jessica Vaughn constructed a large wall grid out of used seats from Chicago’s Blue Line “L” train. The well-worn seats signal the faint presence of former riders, and their bare-bones appearance more broadly evokes the role of Chicago’s inadequate public transportation network in deepening the city’s endemic segregation. An aesthetic of the discarded was also apparent in Walead Beshty’s sculptural arrangements of no longer functioning electronic equipment, as well as in Willie Doherty’s photographs capturing the fading urban vitality of Braddock, Pennsylvania. A similar kind of melancholy fills Allan Sekula’s mesmerizing The Lottery of the Sea (2006), a nearly three-hour-long film about the people who work on and around massive ocean-going ships, screened appropriately in the hull of a decommissioned 618-foot steamer, a permanent fixture of the Great Lakes Science Center, one of several Front venues not normally devoted to contemporary art.

WHILE IT WAS reasonable to stress Cleveland’s Rust Belt identity and industrial history—and the results were visually compelling—this trading on former glories, even when done with sympathy and criticality, was unwittingly anachronistic. The timeliest aspects of Front were to be found instead in works that deal with subjectivity, immigration, and race, especially in ways suggesting how identity politics has evolved, fueled by digital technologies and social media platforms that elide regionally specific cultural codes. At the Cleveland Public Library, Yinka Shonibare exhibited The American Library (2018), an installation comprising more than six thousand books bound in patterned textiles derived from West African models. Embossed on the books’ spines, and interspersed on the shelves, are the names of prominent recent immigrants (or the children of immigrants) who have contributed to American society, from Daniel Aaron, the German-born founder of Comcast, to Daphne Zuniga, the “Melrose Place” actress whose family’s roots are in Guatemala. Mixed into this group are the names of individuals who are vehemently opposed to immigration, like Missouri congresswoman Vicky Hartzler. Martine Syms’s stirring installation at MoCA Cleveland took the tension between self-representation and societal stereotypes as its starting point. An Evening with Queen White (2017) is a four-channel film that is part exercise in surveillance, part history of Motown, part examination of social comportment, and overall, an exegesis on the construction of identity. The film installation was surrounded by 99 Subtle Maneuvers (2018), a composition of photographs of her family interspersed with large-font wall-texts echoing childhood exhortations that urge an anonymous reader (presumably Syms, but the implications extend beyond her) to move forth in the world.

Contributions from Dawoud Bey and Michael Rakowitz suggested the universal significance of highly local experiences. Installed in the well-worn St. John’s Episcopal Church and portraying history as imagined realism, Bey’s Night Coming Tenderly, Black (2017), is a group of hauntingly dark, almost anamorphic photographs of possible Northeast Ohio Underground Railroad sites. Many of the actual Underground Railroad stations remain unknown, but Bey conveys the harrowing journey through an implied narrative, emphasizing a sense of confusion, fear, and deliverance. This quality of a remembered conscientious defiance infuses Rakowitz’s elegy to Tamir Rice, who was tragically killed in 2014 by Cleveland police officer Timothy Loehmann. The official police report says that the twelve-year-old Rice was mistakenly shot because the toy gun he was playing with lacked an orange safety cap. Rakowitz’s collaborative project “A Color Removed” attempted to counter this defense by seeking to remove orange from all public settings, whether through letter-writing campaigns or by acquiring and then installing various orange objects in the gallery, effectively taking them out of circulation and upending the color’s associations with security. The most moving aspect of the piece, however, is the involvement of Tamir’s mother, Samaria Rice, who worked closely with Rakowitz. She made a small work for the presentation and cooked a public dinner of Tamir’s favorite foods.

For all Front’s emphasis on locality, the Rust Belt, and regionalism, much of the best exhibited art resists parochialism. Certainly the CMA, Akron Art Museum, and MoCA Cleveland are museums similar to those in any other metropolitan center: spectacular architecture, fancy cafés, curated art, and curated lifestyles. Even site-specific projects manifest a shared sensibility. Front thus ultimately revealed the fundamental contradiction facing American cities: their specific localism is recovered in nostalgic aspects from the past (often in the form of upscale consumer goods, food being the most prevalent) while their politics and economy push toward a neoliberal future. Just as New York obscures its industrial and manufacturing past with its reinvention as a financial and real estate capital, Cleveland, too, has transformed itself, with health care now supplying the greatest number of jobs. And it should be remembered that Cleveland, like Columbus and Cincinnati, voted for Hillary Clinton. These cities are blue islands in a sea of red, a pattern replicated in New York, Illinois, Texas, Florida, Pennsylvania, and pretty much the entire country. The difference between Cleveland and New York is becoming more and more a matter of scale. East Coast versus Midwest seems a cultural divide from a no longer extant United States. What Front shows, what the political landscape lays bare, what Black Lives Matter and income inequality foreground, is that urban experience in the United States is an increasingly consistent and shared reality. Its opposition, to put it in blunt terms, lies in small towns, exurbs, and the country. There are nuances and exceptions, of course. But today, when stark divides predominate, it is city versus everywhere else—this is America.