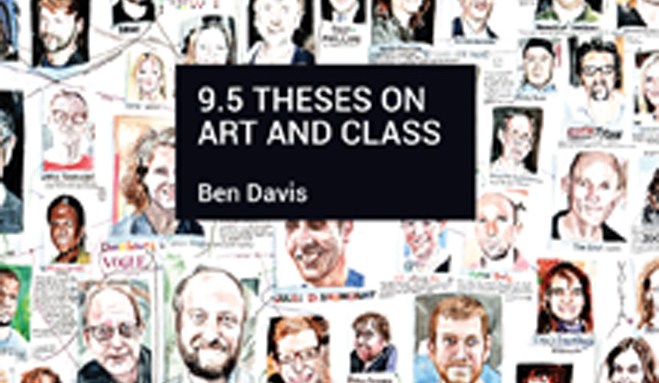 In the world according to Dave Hickey, everyone is either a Pirate (a plundering, boundary-defying individualist) or a Farmer (a fence-building nurturer). No other choices are possible. It’s not hard to guess which one the free-spirited Hickey considers himself. The MacArthur-winning critic recently renounced even the strictures of the art world, proclaiming in a much publicized kiss-off interview: “What can I tell you? It’s nasty and it’s stupid. I’m an intellectual and I don’t care if I’m not invited to the party. I quit.” 1

In these 22 collected essays (1999-2013), several of which appeared initially in Art in America, Hickey presents himself as one of a disappearing band of romantic outsiders comprising artists, writers and other creative types who care nothing for fame or fortune. Instead they seek the gold of rich experience, whether that involves drugs, sex, art or rock ‘n’ roll. In Hickeyland, real critics are fighters, hedonists and gamblers, as opposed to effete characters like biennial curators (other than Hickey himself, who took a stab at SITE Santa Fe in 2001 as a lark), careerists, academics, liberal arts purveyors, “arts professionals” and theoreticians of visual culture. The worst thing to be is a Puritan—one of those dour journalist types who come to Las Vegas for the art, or those constipated educators who nurture “left brain . . . impotent modernism.” The second worst thing is to be “middle class,” an inhabitant of that bourgeois paradise where people pay their bills on time, get up before noon and (in what may be news to most salary slaves) go to dinner parties in tuxedos.

Among Hickey’s other key tenets: Great art is sui generis, “dominant objects” will survive the idiocy of American art patronage, institutional money is stupid money and the logic of sensation is primary. Perhaps most importantly, given the number of times the word pops up in this book, “cool” is good and irony is bad. Hickey avers: “Cool people are not noisy or boring. They eschew footnotes and asseveration. Expressive flailing is verboten. You simply declare some specific truth to be self-evident on one’s own authority, and the music flows out like a Miles Davis solo.”

Not surprisingly, Hickey is ambivalent about American-style democracy. On one hand, the social leveling that allows him to hang with both bar rats and the ultra rich is good (as well as cool). On the other, institutional efforts to level taste, democratize opportunity or encourage artists’ servility to institutions, curators, foundations, etc., are bad. A mixed message also surfaces in Hickey’s pieces about collectors and the market. He has long championed dealers and collectors as people who put themselves on the line for art. That sentiment resurfaces here in a 2008 essay that extols the pleasures of sitting around with collectors and shooting the breeze about art. But by 2009, Hickey’s tone has changed. Suggesting that the art world is going through its own version of a financial meltdown, he remarks: “We need to clean the stables or move next door. This will not happen because quality, as I conceive it, is hard, and it’s easy to convince some suit that junk is a gem.”

When he steps down from excoriating lesser creatures who burrow safely into academe, throw themselves into the curating game or ingratiate themselves with power brokers in exchange for dinner invitations, Hickey has some interesting things to say. Essays on the distinctive nature of West Coast Minimalism, artists’ searches for usable histories, Ghanaian movie posters as a test case for the advantages of mainstream neglect, and the unexpected beauty of souvenir photographs of Mexican whorehouses are full of insight and readerly pleasure.

However, in the end, Hickey’s favorite topic remains himself, the endlessly fascinating, truth-seeking contrarian who is ever, no matter how long he has been in the business, an innocent abroad. Reading Hickey can be a fun ride when his targets are your own. But if you find his truths less than self-evident, not so much.

Ben Davis is probably one of those sissified intellectuals Hickey abhors. Davis, a young art writer who has served as an editor and writer for such online publications as Artnet and Artinfo, produces work that is measured, earnest and idealistic. He takes on big subjects, handling them with clarity and aplomb. These topics include the relation of art and politics, the real meaning of postmodernism, the nature and nurture of creativity and, most extensively, the meaning of class in the contemporary art world.

In the 16 essays reprinted in 9.5 Theses on Art and Class, Davis willingly adopts the Marxist mantle. However, he notes that his experience in the Occupy Wall Street movement brought home the fallacies of both what used to be called “vulgar Marxism” and the heavily theorized academic kind. For Davis, Marx’s key insight is his focus on class as a social structure defined not by income, wealth or taste preferences (Hickey’s take) but by the level of authority one exercises over one’s own work. Thus, while workers sell their labor to earn a wage and capitalists run businesses to make a profit, members of the middle class are motivated by less pecuniary factors. These include autonomy, work satisfaction, and the pursuit of noneconomic meaning and purpose.

This schema places artists squarely in the middle class, which explains why activist models requiring them to join some revolutionary march in solidarity with the working class are rarely effective. Instead, artists are inevitably pulled by the contraries of egalitarianism and meritocracy. Caught between serving the ruling class and nurturing their own creativity, artists become political when they demand a small corner for self-expression in a society that otherwise thwarts this impulse.

This stance leads Davis to call for many of the things Hickey hates, among them increased support for the arts from the public sphere, widespread art education and efforts to broaden the art audience. It also leads him to positions one wouldn’t expect from a self-proclaimed Marxist. Davis acknowledges the irreconcilability of art and politics, maintaining that real change must come from direct political action. Thus he takes issue with academic Marxists and “aesthetic revolutionaries,” who cherish “radical” ideas such as the conviction that collectivity is inherently anticapitalist, that anarchy solves the problem of the state, that anti-art gestures can productively disrupt social relations, and that abstraction and skepticism offer effective forms of political resistance. Thinking perhaps of the disappointing results of Occupy Wall Street, Davis notes, “The notion of politics as street theater . . . is also a perfect recipe for displacing the goal of struggle from enduring material change that could benefit large numbers of people to a spectacle that is purely for the amusement of those who take part.”

Even when dealing more directly with artworks and movements, Davis presents them within the framework of his larger social and political concerns. Thus, for instance, in an essay titled “Hipster Aesthetics,” he suggests that the current penchant among younger artists for impermanence, masquerade and “general fucked-up-ness” is a reflection of the social realities of a world where “creative freedom” and a fashion for irony offer emotional compensation for the plight of downwardly mobile college graduates. He contends that “graffiti is one of the essential artistic products of the neoliberal period,” linking it to such late capitalist phenomena as massive urbanization, deindustrialization and gentrification. He takes issue with academic interpretations of Chris Marker’s photographs that read their ambiguity as a deliberate political statement, seeing this quality instead as a retreat from politics into the aesthetic sphere.

With such Marxist-based analyses, Davis pursues a way of thinking about art that runs directly counter to Hickey’s celebration of, as he put it in his seminal essay “Air Guitar” (the title piece of a 1997 collection), the unmediated “whoosh” of experience. But despite obvious differences, there are unexpected convergences in their visions. Both writers wrestle with today’s strange new art world. They recoil from a reality in which artworks are squirreled away to rest in vaults while investor groups wait for them to appreciate, where the most successful galleries operate like multinational corporations and where the market has become the critic. Seeking relief, Davis longs to make creativity the province of all, while Hickey wants creativity to be unfettered by institutional or economic constraints. One suspects that, in many respects, their utopias may not be all that different. The Marxist and the hedonist meet in the desire to free art from the shackles—economic, intellectual and systemic—that bind it today.

Eleanor Heartney is a past president of the U.S. chapter of the International Association of Art Critics.

1. Edward Helmore and Paul Gallagher, “Doyen of American critics turns his back on the ‘nasty, stupid’ world of modern art,” www.theguardian.com, Oct. 27, 2012.