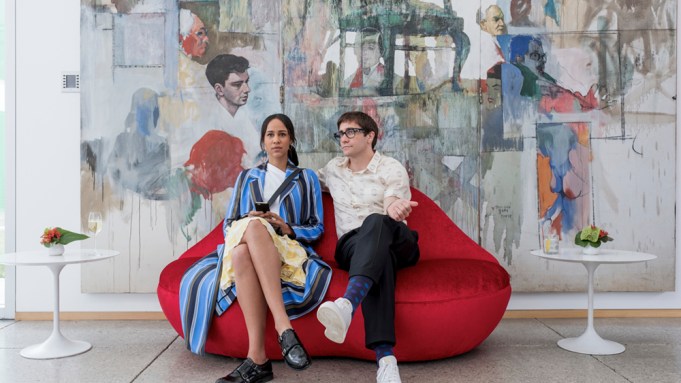 Art takes its revenge in Velvet Buzzsaw, the new horror-meets-comedy flick from Nightcrawler director Dan Gilroy, released on Netflix this month. It’s set in the art world, and rife with the requisite airing of stereotypes: unctuous dealers scheming to poach artists, avaricious art advisers, a studio visitor mistaking a pile of trash for a new artwork. Oodles of mercenary greed give the movie a moralizing backbone, and there’s enough fawning, oily flattery to grease the palms of an army of (conspicuously absent) collectors. Social backstabbing foreshadows the gore ahead. Notably, the antagonist here isn’t a person but his art.

A reclusive old man dies in the LA building where power-hungry gallerist Josephina (Zawe Ashton) lives. She enters his apartment, ostensibly to rescue his cat, and finds hundreds of artworks, along with explicit instructions that they be destroyed. Yet Josephina is arrested by the magnetic, haunting paintings, so—the artist being without living relatives—she steals them, planning to make a quick million. But when her gallery boss Rhodora Haze, played by Rene Russo, hears about the find, Josephina is strong-armed into a partnership. A quick visit with legal and a new chain of title later, and mysterious artist Vetril Dease rises from obscurity. But, we eventually learn, Dease may have been a serial killer, and his pigments include blood. The artist’s vengeful spirit imbues the paintings, ready to kill anyone who tries to profit from them. Cue a bloodbath.

Everything about this movie is deliciously absurd, starting with Morf Vandewalt, Jake Gyllenhaal’s art critic protagonist, owner of a palatial pad, nice wheels, and a storage locker full of art that includes a Cy Twombly. His name suggests independent wealth. He reclines naked on midcentury modern furniture while typing his reviews. Very realistic. He confesses, sotto voce, to doing both Pilates and Peloton. We’re clued in to the sensitivity of his eye by his overblown color descriptors. He fetishizes rekindled flame Josephina’s skin color as almond and saddle brown, and sneeringly describes a dead gallerist’s casket as “smog orange.”

Most improbable is Morf’s outsize influence: “In our world, you are god,” Rhodora breathes. She’s a former punk turned soigné mega-dealer, whose koi-loving hairless cat is the undisputed highlight of the film. Rhodora claims to have invented DIY but following a few decades of grasping accumulation, a Velvet Buzzsaw tattoo (it was the name of her band) and another with the slogan NO DEATH/NO ART/1983 are the only remainders of her former ideals. Morf is supposedly based on Jerry Saltz, but fortunately he only has the New York magazine critic’s passion and not his prurience. The character maintains a veneer of ethics, theatrically refusing kickbacks for a favorable review, but he’s not too ethical: he negotiates exclusive rights to a book on Dease and a few works for his collection. Later, an artist is so shaken by a negative review—unwarranted, and at the behest of Josephina, who just broke up with him—that he drunkenly crashes his car and remains in a coma. Morf doesn’t care. He offers that “a bad review is better than sinking into the glut of anonymity,” as a pair of Fraus, standing in for the audience, gape in fascinated horror.

“It’s an iteration. No originality, no courage,” Morf scoffs as he dismisses an animatronic figure at Art Basel Miami Beach. Some reviewers have said the same of Velvet Buzzsaw. But despite its flaws, I’m ensorcelled, to use a memorable Morfism. Velvet Buzzsaw is a truly terrible film that is also enormously enjoyable. It flirts with being a pulpy B movie, but strikes just the right shade of camp. Finely observed moments make it occasionally very funny. A dealer barks that he’ll “circle back.” The animatronic artwork, relegated to a storage facility, says that it feels invisible. The art handler, wearing conspicuous AirPods, says, “I do more than maintenance and packing . . . I’m really an artist, you know.” Two museum employees endure being terrorized by an art adviser (Toni Collette) who wants them to exhibit her client’s new purchase for the purpose of tax evasion. There’s a running scream gag where a beleaguered assistant keeps finding the dead bodies of her bosses. Morf delivers overwrought one-liners one after another: “Critique is so limiting and emotionally draining.” And in pitch-perfect apoplectic cadence: “The admiration I had for your work has completely evaporated!” Never have ellipses and italics been so loudly proclaimed! And to top it off, there’s even a cautionary subplot about street art and its discontents.

Horror fans will likely be disappointed by how un-scary it all is, but as someone who jumps at the sight of my own shadow, I welcomed the film’s mild, unchallenging creepiness. Each killing involves an artwork coming to life but the deaths are still remarkably inventive, variously featuring pyromaniac monkeys, that animatronic figure, and one sequence in which paint melts off canvases to form marbled rivers of color that seep into the skin as a poisonous full-body tattoo. Most seductive is the spirit’s ability to inhabit other people’s artworks, as if it’s not a sited haunting but a viral curse. Digital representations of Dease’s work are equally powerful; one jams up a cell phone lock screen. (I include Walter Benjamin among the film’s body count.)

What does the deceased Dease want? An art world without greed? A world without art? Rhodora seems to understand intuitively that, as she quips, “all art is dangerous.” She orders movers to take every image out of her house, down to the last postcard, only to be done in by the Velvet Buzzsaw tattoo on her neck. I think, unexpectedly, of the subset of anarcho-primitivists like theorist John Zerzan, who go beyond the usual critique of industrial capitalism to posit cultural systems of signification—including art, music, and literature—as ground zero of alienation, arguing that they must be destroyed for true liberation. But as Rhodora learns, despite her anti-representational Marie Kondo spree, we’ve passed the point of no return.