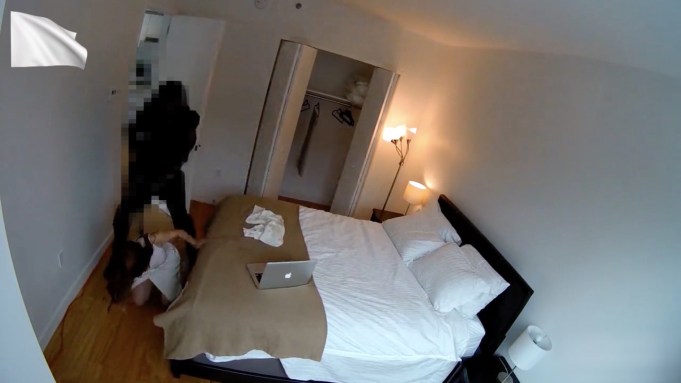 The art market continues to grow, with spring auction house sales totaling a record-breaking $2.6 billion this year. But video and new media works make up a fraction of the works sold, and are only represented in 10 percent of collections. Although more artists than ever are working digitally, many of them find it difficult to monetize their work and have expanded their practices to include more easily commodifiable objects. The problem of selling new media works, of course, is not new. Since video art emerged in the 1960s and ‘70s, new media artists have struggled to earn a living comparable to their colleagues working in more traditional forms like painting and sculpture. Our recent shift to digital, though, rather than being another source of the problem, just might lead us toward a solution.

Two companies are working to develop new systems for selling intangible work and getting artists paid. David Gryn, a curator and consultant based in London, launched Daata Editions in May with support from collector Anita Zabludowicz. The digital platform is devoted to selling select video, Web-based and sound works commissioned from artists with gallery representation. Artist and professor Kevin McCoy’s platform Monegraph, which launches in September, is more democratic. The service offers an online marketplace as well as a licensing system based on similar encryption technology used by Bitcoin and other so-called “cryptocurrencies.”

Over the last two decades Gryn has worked primarily with artists who create moving image works. During a phone interview, the Daata Editions director noted two paradoxical trends: the art market is dominated by fairs and auction houses that don’t cater to video and digital work, while digital media is ubiquitous in everyday life. “It dawns on me every time I go to an art fair that galleries don’t know how to sell moving image work and people don’t know how to look at it and buy it,” he said. In conceiving Daata Editions, he imagined an online platform as a more intuitive way for people to consume and buy these works.

The first season of commissions for Daata includes seven videos, six sound pieces and six Web-based works. Contributing video artists include Jon Rafman and Ed Fornieles (who are represented in the Zabludowicz Collection), as well as Amalia Ulman and Takeshi Murata. Chloe Wise and Charles Richardson are among the six artists tapped for Web-based commissions; Stephen Vitiello and Matt Copson are featured sound artists. All the works can be accessed on the site, with a small watermark in the corner as the only distinguishing feature from the editioned version for purchase. (For the sound pieces, there’s an equivalent aural watermark woven into the piece—a few seconds of beeps introduced about 20 seconds into the work.) Buying an edition also means the collector can download the file. Gryn envisions Daata Editions as an accessible way to “empower the market” to take ownership of digital work.

Selling reproducible digital works has been difficult in a market geared toward unique objects like paintings and sculptures. Monegraph is a platform geared primarily to establishing usage rights for digital works. “We make a distinction between the bits and the rights,” explained Monegraph co-founder and CEO McCoy when I spoke with him in New York, “and that’s a fundamental belief we’ve built the platform around.” The bits, meaning the digital information encoded in a file, can be pirated or copied. “But instead of worrying about those bits, let’s instead have clear articulable ownership and rights around the usage of media,” McCoy said.

Monegraph verifies ownership of creative works through the same system that cryptocurrencies like Bitcoin register transactions: unique alphanumeric strings of characters on a secure database that is both decentralized and a matter of public record. “All our contracts are living on the blockchain in the public ledger,” said McCoy. Artists can create contracts on Monegraph’s platform without specialized technical knowledge, simply by registering the work under their name. They can also register art for sale as a unique work, a limited edition or unlimited stock media. The registrant controls whether the buyer has resale rights and whether the work can be remixed. Selecting “no remix” doesn’t change the ease at which someone can take a screen shot of the work and use it as source material, but it does specify usage so that contesting the remix no longer falls into a hazy legal zone.

While Monegraph gives artists a platform to sell work and control of the terms of sale, Daata Editions defines the contract that it offers to artists. Daata pays the artists upfront for the commissioned works and grants them a 15 percent royalty on sales, as well as two editions of the work they produce. Although the works could potentially be pirated and reproduced, Daata controls rightful ownership through a simple certificate system and maintains the value of the work through an editioning model. Each work is produced in an edition of 15, the price rising with each subsequent edition that sells. The going rate for the first edition is $100 or $200; the highest valued video works on the site are being sold for $5,600. “It can possibly give people that thrill they get at an auction,” Gryn says of the pricing system, “where they want to get the work before [the price gets] too high.”

Monegraph and Daata Editions also take different approaches to authorization. McCoy has opted for a digital verification system at Monegraph, whereas Gryn doesn’t think digital art needs a structure any more secure than those already used for other forms of art. Intellectual property attorney Andrew Gerber suggests that these different verification systems would both hold up in a court of law. “If there’s an instance of copyright infringement and the potential plaintiff had handwritten documents in crayon that clearly established ownership of the infringed work it would be, from a legal perspective, identical to a blockchain that established ownership.” He added, however, that the current copyright system is antiquated, and the registry is hard to find information in. “People are excited that this new technology presents an easier way to find out who owns what.”

There’s some precedent for these contracts and systems in the world of new media art. McCoy, who creates interactive films, videos, installations and performances with his partner Jennifer McCoy, has sold and distributed work via the gallery system, as well as through independent distribution services that were established during the rise of video art in the ‘60s and ‘70s. Nonprofit archives like Electronic Arts Intermix (EAI) and Video Data Bank (VDB) facilitate both the sale and rentals of works in their collections. Most artists receive royalties in the form of screening fees when the works are shown at universities or museums. McCoy noted that this nonprofit model emerged alongside alternative and artist-run spaces like Anthology Film Archives, Artists Space and Printed Matter.

“Video Databank, EAI and LUX [a moving image nonprofit in England] have been doing it brilliantly,” Gryn said, “but their model is ultimately an academic rental model, which doesn’t often cater toward the audience which has now emerged through the art market.” He added, “I think you need to be addressing as many voices as possible in our art ecosystem.” The global class of collectors that Gryn is addressing through Daata, able to flit from continent to continent to attend the ever-increasing number of art fairs, is a relatively new audience.

Monegraph exemplifies another recent change in the art ecosystem: the flirtation between the creative and tech industries, which has the potential to draw alternative funding sources funding like venture capital money into the arts. The business developed from McCoy and New York-based tech entrepreneur Anil Dash’s presentation at the New Museum-affiliated Internet-based arts nonprofit Rhizome’s “Seven on Seven” conference in 2014. Because of its pairing of artists with technology, Rhizome is able to lure Silicon Valley participants for the conference. Today Monegraph is a member of New Inc., the New Museum’s co-working space designed to breed these sort of start-up hybrids.

Like Kickstarter, Etsy or Vimeo, Monegraph’s model is structured around a demographic of prosumers, a demographic of creators that blur the distinction between media producers and consumers. It will take a percentage of the sales made through its platform (though one can register authorship through Monegraph and sell through other means) and will launch a subscription model similar to Vimeo’s, including features for professionals and businesses like higher usage rates. “We’ve seen the democratization of the means of production,” explains McCoy, noting that nearly everyone is a content producer in the online ecosystem. “I think the role of the artist or of the creator is more broadly distributed now.”

Monegraph aims to have a variety of works registered on its platform, from fine art to stock photos. McCoy plans to sell his own work on Monegraph and wants other artists from the gallery world to use the service, though he also relishes in the unpredictability of exactly who will relate to it. “For a long time I’ve made systems of various kinds—data-based systems, imaging systems, discourse systems—and I see this as the same thing,” said McCoy. “It’s going to be a platform people are going to use and use in strange ways. I’m just trying to get to that point.”

Both McCoy and Gryn seem to agree that a healthy online art economy depends on decentralization. McCoy says that the anti-proprietary attitude ushered in by the sharing, remixing and creative-commons era of Web 2.0 “paved the way for big aggregators to come and suck in all the content. Now we have Facebook and a couple of other centralized platforms.”

Gryn, for his part, laments the comparisons of Daata Editions to Artsy (a site that promotes and sells art in all mediums) or Sedition (a sales site for digital art). He says it suggests a mentality that people have come to expect digital monopolies, but he insists there needs to be competition between platforms for successful monetization. With Daata Editions, “it’s not trying to be dominant and take over the world. It’s trying to be a business model that can hopefully exist with many others, but there aren’t a plethora of them yet. If there were a plethora of those platforms paying artists to make work, then all of a sudden you’ve got an economy for artists.”

Macy’s Inc.’s CFO on How It Is Modernizing