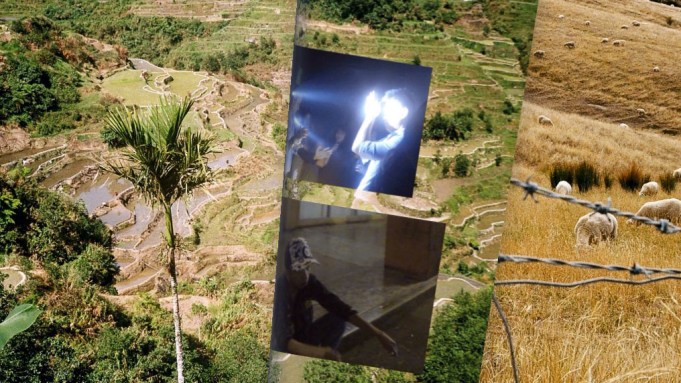 Badlands Unlimited has a stated interest in publishing “books in an expanded field.” This allusion to Rosalind Krauss’s essay on sculpture’s historical contingency as a category could be just another obtuse nod to a theoretical text that doesn’t have much bearing on the project, or it could be a declaration about the future of the book. Luckily, it’s neither. The press’s idea of an expanded field can be understood literally, and even modestly, as encompassing anything that could potentially be defined as a book. It’s not a lurch forward so much as an attempt to move in all directions.

Founded in 2010 by Paul Chan—and now involving artists Ian Cheng, Micaela Durand, and Matthew So—Badlands Unlimited has released a few recovery projects (Yvonne Rainer’s poems, Saddam Hussein’s speeches), a few art editions (a text by Chan carved into a stone slab), and a lot of ebooks, some of which employ mild technological wizardry, and some of which are simply books in a digital format. On Memorial Day, the press released a new series of seven artist ebooks, by Howie Chen, Amy Lien and Enzo Camacho, Matthew Raviotta, Rachel Rose, Georgia Sagri, Magnus Schaefer, and Bernhard Willhelm.

The release was accompanied by a street campaign in which posters announcing the series were hung around New York, plastered over other advertisements and stuck to the back of trucks. Presumably, most of these posters were immediately torn down or destroyed. They functioned less like advertisements and more like an ephemeral publishing experiment intended for documentation on the press’s Instagram. This brief campaign matched the aesthetics of the books, which reflect a continuity of experience on and off the screen.

If the ebooks in the new series have anything in common, it’s their dedication to representing everyday life with elements of documentary aesthetics, filtered through Photoshop and social media platforms. Amy Lien and Enzo Camacho’s Ilan Na Ako Ngayon? How Many Am I Now? is a book of travel photographs taken in various cities in the Philippines, Thailand, Cambodia, Indonesia, Singapore, Taiwan, New Zealand, Italy, Germany, and the US. The book connects all of these places merely through their inclusion and juxtaposition. The heterogeneous material is arranged to be intentionally unilluminating; reading the book feels like scrolling through someone’s photo roll. In this way, the very real historical and cultural differences between geographically disparate cities are downplayed, in the name of playing up the familiar voyeurism of watching others’ lives flit by online.

If there is any doubt that the book is more about the specificity of online life than the specificity of real locales, the occasional GIF embedded in the photos drives the point home. The best and most amusing of these is a small GIF of a crawling lizard placed over a washed-out picture of a classical painting. It’s a badly taken and kind of boring photograph of a decontextualized artwork contrasted with a vaguely funny video of a confused animal, but it’s the best thing you’ll see all day, even though you’ll see a hundred other things just like it.

Magnus Schaefer edited The Nothing Pitch, a collection of photographs and film stills by Lisa Jo, Ilya Lipkin, John Miller, and Carissa Rodriguez. The pictures are similarly mundane, and the book draws a comparison between the sanitized interiors of corporate (and corporatized) spaces and the hegemony of high-definition iPhone photos. Rodriguez’s photographs exemplify this slippage. Her shots of the Airbnb headquarters, an Uber recruitment station, and the inside of various retail establishments that have come to signify gentrification (such as a cultured pickle shop) lie somewhere between a visual essay on the rhetoric of commercial space and an archive of daily life, as if to suggest that there might not be a difference between the two.

All of the books deal with the relationship between digital content, corporate finance, and everyday life, though they don’t all mirror those conditions in a cool, critical, and detached mode. The reiterative nature of money is at the heart of Howie Chen’s Transfomers, which consists of a dollar bill repeatedly scanned on a copy machine until the image is nearly completely degraded. In a short text at the end of the book, the artist recounts his dismal early experience working for Lehman Brothers, where he started copying dollar bills to fight off boredom. This story disambiguates the book’s politics. It’s not only about the abstract circulation of money; it’s also very literally about the destruction of money, a small revenge against the corrupt and tedious system of labor that it upholds.

Georgia Sagri’s Working the No Work is a series of photos of the artist wearing a T-shirt with her body printed on it, performing repetitive and seemingly nondramatic gestures. One extended sequence of images shows her zipping a jacket. Like Chen, Sagri seems less interested in pointing to the fact of monotonous repetition under capitalism and more interested in imploding that repetition, so that by the end of the book Sagri’s gestures seem almost joyfully free from any coerced productivity. Though they remain allusive to the idea of labor, the sequences of the body in motion recall images of the body at work.

Along with the relationship between corporate aesthetics and daily life, this second distinction between freedom and work, celebration and constraint, seems to be the curatorial focus of this series. The books’ release on Memorial Day plays with these ambiguities. On the one hand, releasing them on a national holiday frames the works politically. On the other hand, Memorial Day for many people simply involves picnics and barbecues with friends and family, a celebration of quotidian intimacies.

We can take the aim of publishing “books in an expanded field” in a very straightforward way: as the creation and dissemination of books in all sorts of mediums, and with all sorts of content. Such a project is not merely eclectic; it thematizes the condition of its distribution, particularly by using ebooks. The digital model is neither new nor radical. Badlands Unlimited is not heroically breaking open the future of publishing. They are continuing the endless project of politicizing the representation of daily life.