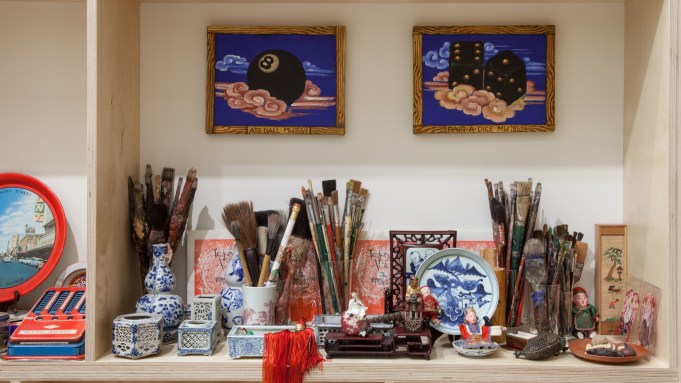 Danh Vo’s exhibition “I M U U R 2,” a tribute to artistic and familial collaboration, opens today at New York’s Guggenheim Museum as part of the Hugo Boss Prize, awarded to the artist in November.

Lining the walls in the fifth-floor gallery that houses the show are shelves and display cases containing a riot of objects: tchotchkes, paintings, scrolls, books, a novelty lamp in the shape of a hamburger, salt-and-pepper shakers and ceramic figurines.

The collection comes from the San Francisco home of Florence Wong Fie, mother of the late New York painter Martin Wong (1946-1999), who built the collection with his mother over many years. Depending on how you count, according to the exhibition’s organizer, associate curator Katherine Brinson, there are somewhere between 3,500 and 4,000 objects in a room that measures about 20 by 30 feet.

The objects range from the precious to the common, from exquisite to embarrassing, for example some ceramic figurines of black children eating watermelon. Boxes in which Wong shipped new finds are endearingly addressed to “MOM.”

The project recalls recent museum displays: for example Song Dong’s exhibition in the Museum of Modern Art atrium of everything his mother owned, along with her tiny house, and Martha Rosler’s “Metamonumental Garage Sale” at the same venue. The trend certainly reflects the postmodern skepticism about categories of high and low and a questioning of authorship. Vo’s project adds another layer of complexity by filtering the relationship between Wong and his mother through the eyes of Vo, an admirer of Wong’s art.

“I M U U R 2” picks up on themes that run through Vo’s work, such as the destabilization of authorship by Vo’s inclusion of objects made by non-artists.

For example, Vo has created a number of pieces with his father, a calligrapher, by asking him to hand-copy significant documents. He has also exhibited Vietnam War-era snapshots of Vietnamese soldiers, taken by a man he met after giving a public talk about his work.

Vo came to know Wong Fie, who is very involved in promoting her son’s work and managing his legacy, after buying a Wong painting of a firemen’s trampoline that is used to rescue people from burning buildings.

The Vietnamese-born, Berlin-based artist spoke with A.i.A. by phone from the museum this morning. “Some time after I bought the painting,” he said, “a letter arrived with a photo of this little lady standing underneath the trampoline itself. Martin had taken his mother to the firemen’s museum.”

Considering that Wong seemed to have a thing for men in uniform—some of his paintings depict firemen kissing in a burned-out Lower East Side—Wong’s bringing his mother to the firemen’s museum is a striking act.

“His relationship with his mother was so complex,” Vo acknowledged. “Florence had a very hard time talking about gay issues in any respect.” Invoking what he called a “conspiracy of silence,” Vo, who is also gay, said, “In families, you just don’t talk about certain things.”

The show’s title quotes a slogan from Wong’s business card that blurs identity—”I am you, you are too”—in a way that resonates with Vo’s own explorations of the subject.

The exhibition features many delightful juxtapositions. What appears to be an Indian miniature with hybrid human-animal creatures rests on a shelf between a piece of Mickey Mouse memorabilia and a trading card showing Ron Howard as Richie Cunningham from the 1970s-‘80s television show “Happy Days.” The tableau suggests a skeptical look at religious or pop icons across cultures.

The installation also includes a small Wong painting of the Statue of Liberty. That giant sculpture has figured into Vo’s ongoing installation, We the People, which incorporates life-size casts of the many plates that make up the statue’s exterior.

“The painting is inscribed on the back ‘Portrait of Elvis in drag, for Pop,'” Vo said today. “But Florence thinks that the title should be ‘The Face of Miss Liberty.'”

Asked if one particular object among the thousands stood out for him, Vo didn’t hesitate.

“I was always very in love with the sculpture of Shiva, with her many arms, that is in a cardboard box inscribed, from Martin to his mother, ‘to a little lady who always has her hands full.’ That says it all, I think.”

The show will consist of personal effects of Robert McNamara, the secretary of defense who was one of the architects of American military policy in the Vietnam War.

Vo acquired the objects, which include a presidential signing pen and an elephant’s tusk, from an auction at Sotheby’s in October 2012.

“We also bought some White House chairs,” Vo said. “Marian went to the auction, because I was not in New York at the time. She would phone me and say, ‘I’m a little worried about these chairs because they’re very worn.’ I just said, ‘That means the president’s ass has rubbed that leather a lot.’ But she wants artworks to last forever.”