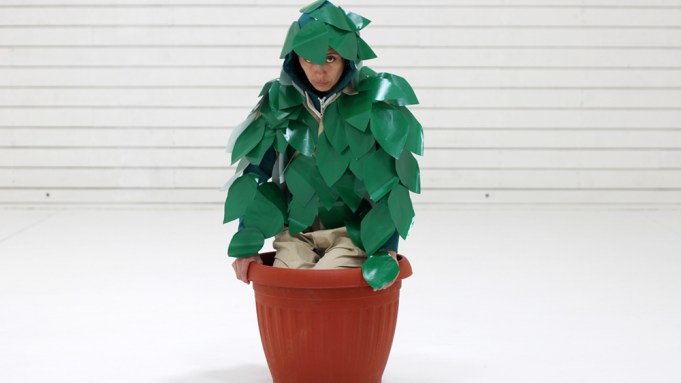 From April 17–21, the fifteenth edition of Austin’s Fusebox Festival presented national, international, and local artists working across—and often between—performance art, theater, sound, dance, installation, and music. Fusebox centers on “liveness” because, as this year’s festival catalogue asserts, live events “have a way of seeping into your pores.” Other cities, of course, have like-minded festivals. New York has American Realness and Under the Radar. Portland has the Time-Based Art Festival. Seattle has On the Boards. But Fusebox has something none of the others do: every program is free to attend.

At a buzzing event at the Austin Central Library in February, Fusebox curators Betelhem Makonnen and Anna Gallagher-Ross, along with founder and artistic director Ron Berry, announced the 2019 lineup and the loose curatorial theme: comedy and its capacity to level social critique. Indeed, Fusebox brought plenty of critical laughs. Jabs at art world pretensions garnered knowing snorts, while the belligerent ridicule of capitalism, xenophobia, and the patriarchy elicited thunderous, cathartic howls. In addition to pointed social satire, what seeped into my pores was a rumbling anxiety about climate change.

Chilean playwright Manuela Infante’s Estado Vegetal (Vegetative State) was memorably mordant about the irreconcilable differences between humans and flora. It is an 80-minute one-woman show influenced by philosopher Michael Marder’s perspectives on plant intelligence and neurobiologist Stefano Marcuso’s research on plant communication. In an unnamed town, a man has crashed his motorcycle into an ancient tree. The elastic actor Marcela Salinas singularly manifests a multiplicity of characters: the unreliable groundskeeper, a gossipy neighbor, a doddering octogenarian, an in-shock mother, the dying motorcyclist himself. Salinas is magnetic, a vocal and physical chameleon relying for the better part of the performance on little more than a few microphones, the polyphonic loops of an effects pedal, and a table covered with houseplants.

As characters process the biker’s imminent death and reflect on humankind’s obsession with velocity, they express envy for the patience and stillness of vegetation. Estado Vegetal is equal parts whimsical and upsetting, but ultimately a valuable meditation on our species’ relationship to others. Perhaps by offering alternatives to anthropocentrism in fiction, Infante seems to suggest, we can acclimate to nonhuman perspectives on ecology.

The natural world figured largely across the program. The Rude Mechs, an experimental Austin theater ensemble founded in 1995, presented Not Every Mountain, wherein charming cardboard and magnet mountain pieces crashed to form awesome peaks, animated by players moving to synthesizer arpeggios and mantra-like narration. HANNAH, a production from Norwegian artist collective Verdensteatret about a visit to the Mekong Delta, also dabbled in studies of geological time through sonic dissonance, tinkerer aesthetics, and psychedelic strobe chromatics. In an empty parking garage near the Texas State Capitol, Rainforest Reverb, a 32-channel immersive experience organized by sound-art collective Rolling Ryot, mimicked the multilayered sonic palette of rapidly disappearing rainforests. The atmosphere in the garage felt post-cataclysmic. Will meandering through crude simulations like this be what hiking is in twenty years?

Liveness is Fusebox’s mission, but the festival also programs a handful of thematically linked exhibitions. “Everyone Universe, Everyone Dust” by New York painter Nathan Randall Green included a site-specific mural at the festival’s nighttime headquarters on East 5th Street and a solo show of paintings at Big Medium. Both were exercises in hard-edge geometry, the former exploring the Doppler blueshift astronomical phenomenon, while the latter resembled atavistic layers of sediment and rock.

At festivals like Fusebox, genre-bending and convolution are to be expected. The works one encounters are typically political in charge but obtuse in practice. Live works, in particular, are complex, time-based, and comprised of a whole mess of materials: human bodies, wiring, can lights, plastics, wood, bass and treble, smells, drinks, and catalogues, not to mention photographers documenting it all. There are ecologies upon ecologies to pick apart. Anxiety is there by default; so many things could go wrong.

Cognizant of all of that, I am still utterly floored by Michelle Ellsworth’s The Rehearsal Artist. A 35-minute nontraditional dance performed in and on a kinetic sculpture, it reveals itself to be an intimate social science experiment, activating base paranoias. Each performance is presented to no more than eight viewers, who are instructed to don “knee aprons”—hair extensions that clip to the pants and cover the shins—before entering a performance space. This is only one of many instructions, some of which are more oblique than others. Some ask viewers to assist the performers. Others ask them to explore their capacities for empathy.

After peeking through a pair of portholes along a hallway, viewers arrived at a large, vertical wooden circle with a horizontal mirrored band across its diameter. There was a bench and several stools. We sat and stared at ourselves in the mirror. Another porthole, this one near the top of the circle, popped open and Ellsworth wedged her face through. She unleashed a verbal waterfall of armchair psychology about studies on empathy and the science of human relationships before disappearing. The mirrored band went black and a glass circle in the middle of the larger wooden circle lit up. There was a dancer’s head in it, and I was reminded of Princess Mombi’s collection of ready-to-wear heads in the creepy Return to Oz. We were informed by the program notes that the dancer was watching scenes from 2001: A Space Odyssey. Hands, presumably Ellsworth’s, appeared from above and began outfitting the dancer’s headspace with doll-size kitchen appliances and cupboards.

The wooden circle, it turned out, was a gigantic wheel. It began to rotate 360 degrees, tumbling the doll furniture onto the dancer’s head. The audience laughed, and the cycle repeated, clockwise then counterclockwise, albeit with different set dressings: Scrabble pieces, dolls dressed for a wedding, miniature plastic apes, plants and grass. There were Mormon temple rituals. Death prep exercises. Cheez Whiz. An infant needed CPR immediately, Ellsworth announced. White Russians. Are we 2001’s Dr. David Bowman after his EVA pod gets sucked through the Stargate?

Revealing anything further would be a betrayal to the artist. But consider a shotgun review I sent by text message upon exiting: “It was like if Black Mirror were compelling.” Ellsworth has somehow squeezed an unreasonable amount of late capitalism’s extant anxieties into one of the most affecting performances I’ve seen in years. The Rehearsal Artist made visible a century’s worth of social accelerants stoking the Anthropocene, all in the time it takes most of us to get to our jobs. It is—I say this with sincerity—an important work.

Fusebox 2019 was challenging, joyous, anti-capitalist, frustrating, and laugh-out-loud funny. But most importantly, it implicated audiences in the global meltdown. The works curated were consistently immersive and entertaining, but rarely distractions from reality. Rather, they were designed to agitate, to provoke. The Anthropocene is here. Can you feel it? Following a five-day parade of gallows humor about our species’ ecological death wish, I sure could. Allowing for a little mirth about our predicament though isn’t necessarily indicative of nihilism. Rather, I believe it suggests that we’ve actually started processing it.

Christian Louboutin to Be Honored by World Monuments Fund