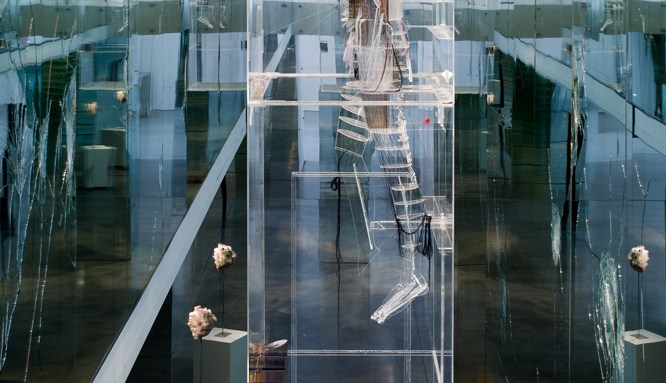 For 37-year-old, New York-based artist David Altmejd, sculptures, like human bodies, generate a certain energy. Altmejd’s current show, at the Greenwich, Conn., Brant Foundation-established by Brant Publications chairman Peter Brant-includes work from the past 10 years and announces Altmejd’s adoption of a new favored motif: the giant. He’s transformed the foundation’s sleek galleries into body parts-the chest, the heart, the central nervous system and the head. The show remains on view through April 2012.

BRIENNE WALSH Exhibiting at the Brant Foundation offered you the opportunity to explore a variety of exhibition settings. How did you handle the installation?

DAVID ALTMEJD I wanted to respect the identity of each of the four rooms, which have very specific characteristics. One is very wide with no natural light; one has ceilings that are almost 25 feet high; one has a huge skylight; and one is more of a kind of living room. In the very, very high room, I thought a lot about how the space itself would dwarf anything you put in it. So I created figures for it, roughly 6 feet high, and put them on 6-foot-tall pedestals. In the room with the large skylight, the pieces are very white, almost as if they are dematerializing in the natural light. I saw them as being almost nonphysical.

WALSH Are the rooms united by a common theme?

ALTMEJD I see the whole space as a kind of body. You start really deep in the bottom gallery, where it’s darker, and travel from there. In each successive room there’s more and more light, until the last room, where you can actually see the outside world. This room feels like a head to me, and the windows in it are like eyes. I covered one room in mirrors, which makes it totally self-reflexive, like the inside of one’s mind. And in the large, double-high space, I saw a chest, with an invisible heart beating in the center of the works.

WALSH Would you say that the body is the subject of the exhibition or just a container for your works?

ALTMEJD I wasn’t really conscious of making that decision. What I was really thinking about was how amazing it is that sculpture exists in the same space as the viewer. It can potentially have as much power as the body. That’s not to say that I’m interested in representing the body-it’s more that I’m interested in creating an object that generates the same kind of energy. Every one of my sculptures functions as a cell. Outside, it may be solid, but inside, it’s fragile, with tensions and systems.

WALSH Are your monumental sculptures representational?

ALTMEJD I have always had a problem creating standing figures, because I don’t want to just create representations of human figures frozen in time. Sculptures like that seem to be pretending, like they exist in another space that isn’t reality. So I tried creating giants, which seemed acceptable because they were more like architecture than bodies. It’s almost impossible for the viewer to physically identify with them. It’s more possible to imagine inhabiting them.

WALSH How did you come upon some of your signature subjects, such as the werewolf and the giant?

ALTMEJD I actually would say that I don’t work around subjects. Everything that seems like a theme is the result of a process. The werewolf appeared in the work because I needed an object that was suggestive of transformation. At the time, I was doing a lot of minimalist structures, and the werewolf emerged as an element that solved a formal problem in my work. Once it materialized, it stayed in my practice. Then the werewolf kind of disappeared as if it has dematerialized, gone underneath the ground. Now, I’m working on giants.

WALSH If 95 percent of your work is driven by process, how do you decide what materials to work with?

ALTMEJD For me, the materials seem to generate energy. Things that look like crystals, such as glitter for example, give the impression that they are radiating heat or light when they are glued onto an object.

WALSH Have your processes changed as your sculptures get larger and more ambitious?

ALTMEJD Not really, because I use the same materials-I just use a little bit more of them. I am very crafty. I can usually buy all of the materials at an art supply store. What’s most important to me is that whatever I do, it has to feel like it comes from my studio, from my own hands.