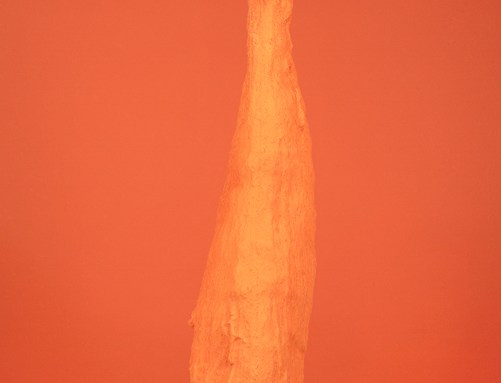 David Benjamin Sherry is not interested in the notion that everything in art has been done before. Despite all of the naysayers—overly cautious professors at Yale, where he got an MFA; fellow artists who believe that they are merely recycling old ideas; ranting art critics—Sherry feels like he can do something new with his photographs. And he’s not the only one who thinks so. If the dealers, collectors and museum curators who have been banging down Sherry’s door since he graduated aren’t proof enough, then perhaps his upcoming solo exhibition, “Form Forming Formation,” opening on Apr. 30 at OHWOW, a recently-opened gallery in Los Angeles, will win over the skeptics.

Sherry, who received his undergraduate degree from the Rhode Island School of Design in 2003, first met Al Moran and Aaron Bondaroff, the founders of OHWOW, in New York soon after he finished school. Sherry was hanging out with a downtown crowd that included the artists Dash Snow and Dan Colen, and Moran and Bondaroff were everywhere on the scene. “It was a beautiful, beautiful time,” Sherry reminisced one chilly afternoon when I visited his studio in Williamsburg. “Bondaroff kind of picked me up right when I got to New York and told me: ‘You’re the fresh blood!'”

After including his work in group exhibitions at Art Basel Miami Beach the past two years, Bondaroff asked Sherry if he’d like to have the second solo exhibition at OHWOW’s newly opened space in Los Angeles. Sherry, who had been exhibiting at venues such as MoMA PS1 in New York, the Garage Center for Contemporary Art in Moscow, and the Aspen Art Museum in Colorado, was intrigued by the proposition. “It’s a community-based kind of platform,” he said. “It’s really great to be part of a group of people who are so energetic. They are the most supportive, positive, loving people to work with.”

The show at OHWOW will feature 16 new photo-based works. Throbbing with prismatic colors, each piece is dominated by a single tone, making it look, at first glance, like a large, color field abstraction. “I’m moved by color, especially within photography,” Sherry told me. “I wanted the works to evoke color and shape before the image within was even recognizable.”

A closer examination reveals that half of the works are chromogenic prints of highly expressive, and frequently anthropomorphic, plaster sculptures made (and eventually destroyed) by Sherry. The others are collages built up from carefully sliced pieces of photographic paper that form geometric patterns inspired by the solar system, in some cases, and the phenomenon of crop circles in others. “I remember I’d spend late summer nights just staring at the stars as a child, hoping to see a UFO or a galactic collision or meteors,” Sherry explained. “The collage works were a grueling process that I very much enjoyed during the cold New York winter months, but as the weather changed, and the snow started melting, I found myself in my empty studio ready to get dirty and physical. I began sketching these humanlike forms, some monstrous and shape-shifting, that took on a life of their own.”

Sherry photographed the colored-plaster sculptures that emerged from these drawings—which variously reference Lee Bontecou constructions, nightmare scenarios from Guillermo del Toro films, Keith Haring cutouts, pre-historic humans remains, and Giacometti figures—against a backdrop that was the same color as the plaster. The resulting images are flatly monochromatic, yet reveal their layered physicality in small details: a speck of white plaster dripping from the bubble-gum pink hand of the monstrous form in Frozen Bismuth Pale Puce Coral Sand Stone (2011), or the sunflower-yellow head of the elongated figure in Golden God Rod Radiant Lemon Lactating Saffron Sap (2011).

Sherry’s photographic works create a study of our universe as seen through the lens of his own mind. “As the sculptural works began to take on their own forms, I would keep the collages close at hand. I found that the two began to balance each other out and created this strange dialogue.” With Nina Simone’s apocalyptic track “22nd Century” playing in the background, he went on: “The works seemed to relay a message to me about the sudden changes we are experiencing, and also the current state of humanistic relationships that seem to have escalated in the past year, from Japan’s earthquake to riots and protests in North Africa and the Middle East.”

It is in his exploration of contemporary issues using a nostalgic medium (analog photography) that the seed of revolution in Sherry’s work may lie. “I’m interested in what it means to make art in 2011. How can I make images in a world that is drenched, soaked and over-stimulated?” Sherry went on, answering his own question: “I like to think that my work reflects a shift in collective consciousness. Artists, writers and musicians have always sought to find the true voice of the time in which they lived. It’s second nature for me to be reactive and create new things. It’s an unstoppable force within.”