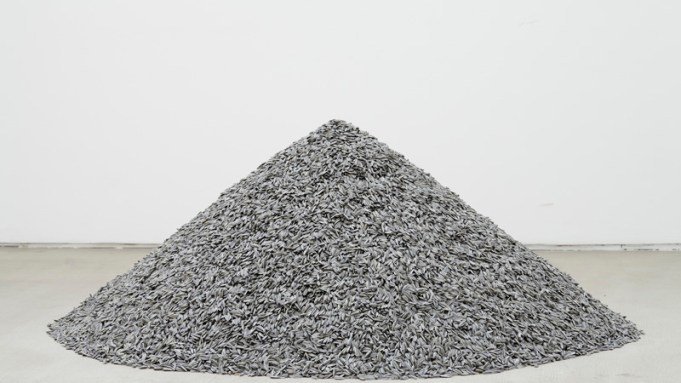 What more can you ask of the Armory Show Modern than to provide a few transcendent moments with some art-historical significance and a bit of emotional depth? This booth’s display graciously fulfilled the request with a large, sumptuous 1964 Picasso painting from his “Artist and Model” series, hanging near an evidently precious but rather abject sculpture, a heap of ceramic sunflower seeds piled neatly on the carpet (Ai Weiwei’s 2009 Sunflower Seeds). On the wall just above the seed mound was another surprise, a lush and brooding 1895 seascape by Edvard Munch. Completing the scene was a splashy Georg Baselitz canvas and a monumental Robert Rauschenberg painting that covered the entire back wall. Rigorous and austere yet generous in its invitation for viewers to free-associate among wildly diverse, century-spanning visual languages, the presentation offered the kind of unique art experience that makes the circuitous and sometimes arduous trek to the Armory Show worthwhile.

Albeit unruly and somewhat overhung, this display contained some of the most striking works at the fair. I have a weakness for work by Keith Sonnier, especially his sculptures with neon, and so immediately noted two medium-size wall sculptures, selections from two 2005 series, “Cohla Junction” and “Paleolithic Shelves.” These are among the best of Sonnier’s long career. The example from the former group, a vertically hung rectangle of corrugated board, folded in the center, contains in each corner black semicircles and in the upper-left a red-painted disk. Two short tubes of white neon neatly arranged in the center of the upper and lower sections allowed the piece to convey an irreconcilable mix of playful charm and anxious foreboding. Despite the angular construction in metal and plastic, the “Paleolithic Shelves” series (2005) appear almost anthropomorphic. Plexiglas rectangles with two round holes at the top look like geometricized heads. At the center of each work, small neon tubes of blue, red and yellow—the primaries, or rather, primordial hues?—illuminate the Plexiglas panels.

Sonnier’s neon works also cast some colorful rays on a life-size female figure, a sculpture by Lin Tianmiao (Initiator, 2004), covered in sheer white silk. Like a princess from a crazy fairy tale, the figure wears a gown whose long train is being devoured by a large white frog seated on the floor a few feet away. As if corroborating the fantasy, Rob Wynne’s wonderful new poured glass and mirror lettering reliefs mounted on an adjacent wall spell out in blobby letters, “Xanadu.” One of his recent paintings of two intertwined seahorses hung just below. Adding a crucial note of sobriety to the proceedings, Fred Wilson’s dignified bronze head, Ota Benga (2008), on a sculpture stand nearby, echoes the work of some of the best 1930s or Art Deco-era sculptors, such as Richmond Barthé.

Aside from the sprawling mural by James Rosenquist, with its writhing networks of fragmented imagery, the memorable attractions in this booth included large works by Ukrainian-born Stockholm-based photographer Nathalia Edenmont. Recalling the mood of certain Ingmar Bergman films, Edenmont’s images exude a palpable sense of angst regarding rather obvious themes of coming-of-age of a young woman—starring her favorite model, a rather wan redhead. The works selected for this presentation were compelling examples that showed the artist at her best. Outstanding was the dreamlike Self-Portrait (Deathbed), 2007, in which a girl in gray satin sits near the prostrate “corpse” of her mother, portrayed by the artist in ashen makeup. Among Edenmont’s other evocative images was a simple composition of a pair of hands cupping a bunch of old rusty screws; and another showing what looks like a blanket of insect, maybe butterfly, wings.

Contributing to the impact of this booth were two recent, large monochrome canvases by Jason Martin. A rectangular abstraction in indigo appeared nearly black, the brushwork visible only after viewing the surface from various angles. Even more imposing was a white canvas in a peculiar diamond shape with concave edges. If the artist aims for a sort of mystical quality in his work, he achieved it here. The iconic painting must have been well suited for its installation in a church in Germany last year.

This lively mini-retrospective was a centenary tribute to the American-born surrealist painter Dorothea Tanning, who turns 100 this August. Tanning defines the expression “living legend”: she was  one of the original Surrealists and one of the few women in the group. She lived and worked in Paris for 28 years before returning to the U.S. just before World War II. In the 1940s, she showed with key New York dealer Julien Levy, and married Max Ernst during this time. Her works are as enthralling as her biography. The fine group here included some late Surrealist pieces, such as The Witch (1950). Also notable, was an evocative figure study, Beyond the Esplanade (1940), proving her technical chops, and later canvases, such as Matinee Classique (1961), show her evolution toward abstraction and a colorful expressionist idiom she used to great effect.

Here, a well-known photo, Sebastian Salgado’s image of the inhumane working conditions withstood by laborers in Brazilian mines (Serra Palada, Brasil (backs), 1986) contrasted jarringly with emotive but glamorous portraits by Dutch photographer Hellen van Meene. Among the best was a striking image of Gabourey Sidibe (Gaby, LA, 2010). But nearly upstaging Gaby was Andrew Moore’s large (50 by 60 inches) riveting photo of the interior of a once-grand Deco movie palace, (Palace Theater, Gary Indiana, 2008), an anguished plea for architectural preservation that underscores the lack of real support for landmark buildings across the country.

Stepping into this booth, one had the feeling of discovering a stellar collection in a little-known museum. Among the treasures, John Storrs’s large untitled abstract black-and-white painting (1934) seemed uncannily of-the-moment. It presided over smaller gems by Edwin Dickinson and Horace Pippin. Bob Thompson’s large, vibrant mythological scene, Tancred and Erminia (1965), with bright blue, yellow and red figures, also seemed far ahead of its time in terms of reimagining the figure. Marsden Hartley’s Still life (1921), with its almost angry slashing brushstrokes of black and gold against a pinkish background, conveyed a powerful dynamism that reached far beyond its modest subject and scale.

An imposing canvas by the late Norman Bluhm, a large abstraction with a large purple disk in the center intercut with splashes of white and underscored by a sweeping brushstroke in black, was the standout here (Oenotria, 1971). Bluhm’s work is undergoing a major reassessment, and examples like this should further elevate his reputation. Among other strong pieces by American classics like Rauschenberg and Stella, Larry Poons’s early untitled drawing for one of his 1964 “dots” paintings was an unexpected treat. Complete with coffee stains, this rigorous composition study offered a rare insight into the working method of an absurdly underappreciated artist, whose more recent work was on view at Danese Gallery’s booth.

It would be difficult to find a better example of Ed Paske’s work than the 1970 painting of a figure playing an accordion on view here. Corresponding with canvases by Christina Romberg, whose figurative abstraction closely relate to those of the Chicago Imagists, it was the centerpiece of a booth containing sculpture by William Edmonson and the Philadelphia Wireman. Recent works by young artists, such as the team of Steven and Billy Blaise Dufala, more than held their own here. Known for focusing on environmental issues in their works, the brothers showed large watercolors of the floating islands of plastic bottles and other refuse that litter the oceans, as well as a peculiar, jerry-built machine sculpture that resembles a yellow power saw.

Outside the booth, an enormous stripe painting with a pale yellow ground by Kenneth Noland hung on a diagonal, as a tribute to the recently deceased artist and to formalist abstraction in general.The other works on display constituted an entirely different sort of agenda. Filling the back wall, the dozens of panels in Zou Cao’s mural-size Chairman Mao (2010), showed a repeated image of the Chinese leader set against a bright red background, each defaced by the artist’s enlarged fingerprint. In this ambitious piece, Zou Cao riffs on Warhol’s famous “Mao” images while he elaborates upon his own “fingerprint” series. Contributing to the edgy political tone of the display was Joel Morrison’s Bigjaws (2008), comprising the stainless steel jaw of a prehistoric animal with large bullets for teeth as an acerbic gesture of anti-militarism.

Viewers were pulled into this booth by Alessandro Balteo Yazbeck and Media Farzin’s wall text work installed on an outer wall. The Joseph Kosuth-like piece focused on an art-historical moment—a FDR 1939 statement about art in America and its socio-political ramifications. Much of the rest of the booth was given over to prime examples of Latin American constructivism, including works by Gego, Jesus Rafael Soto, and included one of Margarita’s Paksa’s Plexiglas cube sculptures, Silencio (1962), which pre-date similar and far better-known works by Larry Bell. Also of considerable interest here was a large photo of Andy Warhol and Marta Minujín seated above a big pile of corn on the cob. The shot was taken while the two were participating in one of Minujín’s 1985 performances, Payment of the Argentine Foreign Debt to Andy Warhol with Corn, the Gold of Latin America.