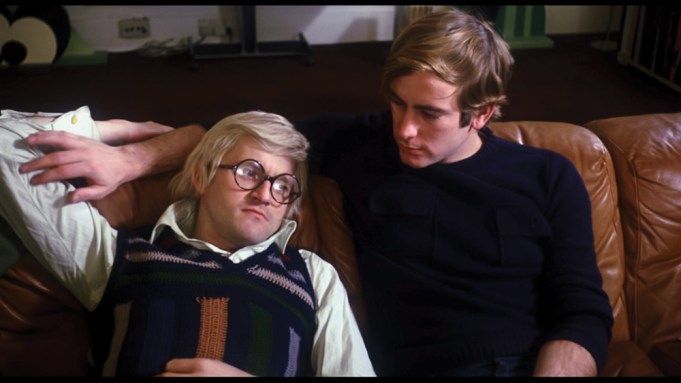 A Bigger Splash, director Jack Hazan’s semi-fictionalized portrait of the artist as a youngish bloke, begins in Geneva in 1973, or at least purports to. The painter-cum-tabloid fixture David Hockney is hanging out with his friend, Joe MacDonald. They gossip, finish each other’s sentences, and giggle knowingly. The scene is charmingly unpretentious but not, in the strictest sense, true: Hockney is sitting in London, not Geneva. It’s an odd little fib, the first of many.

Next—though actually, if the intertitle is to be trusted, many months previously—a man named Mo McDermott is introduced as Hockney’s studio assistant. He explains that Hockney’s latest boyfriend, Peter Schlesinger, has left him. Mo’s no actor, but like everyone else in this film, he’s playing a version of himself. He wears a lime-green shirt that makes him look like he’s floating through one of his boss’s paintings, and he never stutters or hesitates: “When love goes wrong,” he says, “there’s more’n two people suffer.” He’ll repeat the folksy line later on—but did he originate it? And if he didn’t, who?

Getting us to question what is and isn’t performed is crucial to Hazan’s filmmaking. Shot over the course of three years, released in 1974, and reissued as a 4K restoration this June, A Bigger Splash is a triumph of docufiction—a word that adequately sums up its mishmash of staged and vérité scenes, but doesn’t capture the vertigo of hopping between them. One moment, we’re at a drag pageant in swingin’ London, all lurching cameras and ambient chatter; the next, we’re alone with Hockney or Schlesinger in a taut, micromanaged set piece. Often, we have no way of telling the candid from the carefully choreographed. But by forcing us to stay alert, making the hunt for truth seem like a worthwhile end in itself, Hazan avoids the kinds of myths and generalizations that ruin most films about artists.

Everything about this film is deceptive, starting with the title. A Bigger Splash, Hockney’s 1967 painting of a mysterious diver, plays only a supporting role in A Bigger Splash. The real star, fittingly enough, is Portrait of an Artist (Pool with Two Figures), 1972, which spends most of the film half-finished while Hockney travels, sulks, plays, parties, and pines for Peter.

When Hockney does paint, it’s mesmerizing. Hazan captures his protagonist’s casually virtuosic brushstrokes in equally confident, unbroken shots. In a film filled with fictions and semi-truths, the act of painting stands as unimpeachably true—no editing trick could simulate the creation of work this good. Still, one wonders what kinds of instructions the director gave the artist. In one scene, Hockney slashes a finished canvas with a palette knife—did the cameraman just happen to capture this showy moment? Later, we see Hockney wearing a shirt the same color blue found in a painting he’s been working on. Most documentary filmmaking tries to avoid these heavy-handed, symbolic flourishes (the creator inseparable from creation), but it works here because it unfolds in the midst of a long, fiercely literal vérité sequence.

Beside scenes this inventive, most films about artists seem laughably naive. Last year, two examples of the genre were nominated for Oscars: Julian Schnabel’s At Eternity’s Gate (on Vincent van Gogh) and Florian Henckel von Donnersmarck’s Never Look Away (loosely based on Gerhard Richter). Like many artist biopics, they made the mistake of turning their protagonists into symbols. When a priest smirks at van Gogh’s work, for instance, Schnabel invites us to smirk back—we know van Gogh will be big, but nobody in the film does. Von Donnersmarck romanticizes his material even more egregiously, smothering the first act in schmaltzy music and the kind of easy nostalgia Richter has spent most of his career disavowing. He disavowed the film, too.

Hazan doesn’t pretend to know Hockney well enough to say what he symbolizes. Over the years, he filmed the artist and his entourage drinking, screwing, and swimming—but all this up-close access made them seem more mysterious. It’s a paradox typical of Hazan’s era, when Shirley Clarke, Jim McBride, William Greaves, and the Maysles Brothers were directing kinetic, rough-hewn works that seemed to express something authentic about their milieu. But authenticity as these filmmakers defined it usually came with an asterisk, and sometimes an outright prank. At the end of McBride’s David Holzman’s Diary (1967), seemingly the diary of a pretentious young Manhattanite, it’s revealed that everything we saw was staged. The Maysles Brothers’s fly-on-the-wall Gimme Shelter (1970) depicts the Rolling Stones’s Altamont concert in exacting detail, but the film ends not with a bang but a question mark; neither we nor the filmmakers know exactly why the infamous stabbing occurred.

In A Bigger Splash, Hazan isn’t a fly on the wall. No one has forgotten they’re being filmed: Hockney’s gallerist John Kasmin keeps calling him “David” over the phone, his eyes darting nervously toward the camera as if he’s worried viewers will forget. In another scene, we see the cameraman reflected in the smooth curves of a lighting fixture—a moment most documentarians would have left out. The dreamy, slow-motion sequences, by contrast, add an unexpected dash of psychological realism. Midway through the film, we see Schlesinger dive into a pool naked, climb out, and saunter around in the sun, young and bronzed and dewy, until slowly we realize that we’re seeing Schlesinger the way Hockney has always imagined him: Schlesinger the supple Greek god.

Hockney eventually finishes Portrait of an Artist, complete with an eye-popping, near-life-size portrait of Schlesinger (the painting’s second figure is Hockney’s friend John St. Clair). It is loosely implied that he treats the canvas as post-breakup therapy—if you can’t date ’em, paint ’em. Wisely, Hazan doesn’t push these Freudian clues too far. Hockney’s love life is as important, and unimportant, as anyone else’s. The film’s funniest interlude finds Kasmin standing outside a window, face pressed ghoulishly against the glass, and for much of Hazan’s film we’re in a similar position: looking in at an artist we know and admire but don’t really understand.

In its hedonism, blurring of divisions between work and play, fourth-wall-breaking asides, and fetishization of Southern California, A Bigger Splash has one very clear twenty-first century analogue: the celebrity social media account. Yet in its modesty, unforced playfulness, and genuine awe of its subject’s creativity, the film has remarkably few peers. Most recent depictions of famous creative people—on film, magazine page, Selena Gomez’s Instagram, or elsewhere—wobble between the indulgent professing of genius and the faux-humility of “Stars—they’re just like us!” Using every docufictional trick in the book, Hazan inoculates us against both points of view, trying them out just long enough to show how simplistic they really are. Most cannily (and unlike most of its artist-film competitors), A Bigger Splash never tries to dive into the depths of Hockney’s mind—one reason why its hot, glistening surfaces remain irresistible.

This article appears under the title “Candidly Choreographed” in the September 2019 issue, pp. 22–25.