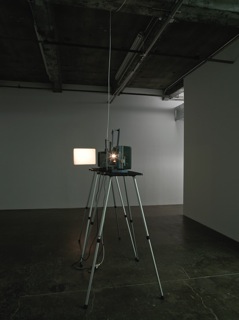 When they enter “New York Exists in 8.5 Billion Sq. Ft.,” David Lamelas’s exhibition at New York’s Maccarone gallery, visitors are confronted with a violent stream of white light. Two back-to-back 16-mm projectors without film, which the artist has placed in the gallery foyer, produce the light. One projector shines right at the door onto the street; the other casts a small square of white light onto the gallery’s front wall. “I made this piece up in my mind when I was a little child,” the 66-year-old Lamelas told A.i.A. at the gallery. “When I was young I loved the cinema, and what impressed me the most was to look back and see this abstract stream of light that would become an image on screen.”

The works in the exhibition create conversation between past and present. Lamelas says that the decades between the creation of Projection (installation), (1968–2012) and the current iteration have caused the meaning of the piece to change. “For the piece, I wanted to get rid of the screen itself, so that the phenomena of the projection is more important. But now, it’s not very easy to find 16-mm projectors.”

Many of the works are from 1966–69—when Lamelas studied art at the Academia Nacional de Bellas Artes in Argentina and in London, at Central St. Martin’s. Lamelas left Argentina in 1968, at the beginning of the dictatorship of president Juan Carlos Onganía (which predates Pinochet’s 1973 rise to power). Before leaving for London, says Lamelas, “I was arrested four times because I was wearing a dotted shirt and had long hair like The Beatles—I knew it wasn’t the place for me anymore.”

In London, he found that St. Martin’s was the center for new British sculpture at the time, but it didn’t necessarily suit him. “I had already made the pieces shown [in this current exhibition], so I was a little bit beyond British sculpture,” he says. “I was disappointed because they gave me a studio, and most of the artists were still working in plaster and bronze, while I was totally conceptual.”

It was during this time that the artist began making film, beginning with A Study of Relationships between Inner and Outer Space (1966). One segment of that film analyzes the architecture and general workings of the space. A complementary portion of the film explores “outer space”—focusing on climactic, social and structural elements of the macrocosm of London. In the late ‘60s, this type of cross-disciplinary practice wasn’t entirely in line with the expectations of Central St. Martin’s. “My teacher, sculptor Anthony Caro, said: ‘Mr. Lamelas, if you want to make films, go to film school,'” laughs Lamelas. “This is the sculpture department.”

Several iterations of a sculpture that Lamelas conceived in 1966, as a teenager in Argentina, Corner Piece, are featured at Maccarone. In each of the four corners of the gallery’s front room, the artist has inverted the corners with nearly invisible drywall. The choices of placement and dimension for these sculptures are “always site specific,” says the artist. “I make an intuitive choice after I look at the space.” He expresses fondness for simplicity and a undying love for the 90 degree angle) in his conceptual sculpture-“I try to reduce my aesthetic choices to a minimum,” says the artist-which allows for the unexpected revelation inherent in chance: “The idea of Corner Piece is to reverse the space between an angle. To make the negative into positive,” says Lamelas. “The empty space is what really becomes the work,” says the artist.

“Sculpture was still on pedestal in the mid-60s, and I wanted to take the sculpture off the pedestal,” he says. The work also invokes another ’60s-era trope, the gestalt image. Best represented by the iconic gestalt “chalice” image, where one perceives either two faces in profile or the outline of a chalice, the gestalt image was created to highlight the gaps in human perception. It is almost impossible to see both the faces and the chalice in this very simple motif. When viewing Lamelas’ Corner Piece, one’s vision flickers back and forth, between the walls and these perceptual tricks of form.

This moment of cognitive dissonance, between the expectation of the viewer and the realization of the artwork, applies to the whole exhibition. As Lamelas says with a smile, “It doesn’t look like a show, but it is a show.”