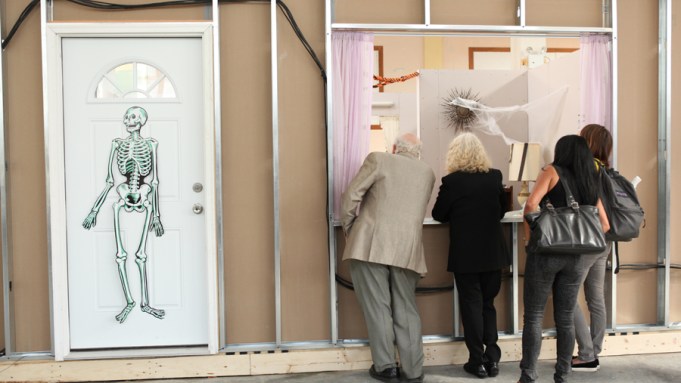 If you haven’t already, cruise by the Essex Market in New York’s Lower East Side to catch David Levine’s Habit, which runs through Sunday, Sept. 30. Habit, presented by French Institute Alliance Française and Performance Space 122 as part of the Crossing the Line Festival 2012, plays continuously every day for eight hours, but you can watch however much you want and come and go as you please.  That’s one of the interesting things about Levine’s type of art-theater.  It frees the spectator from the purgatory of theater architecture and theater etiquette.  Habit is also free in the sense that there’s no admission charge.

The conceit of Habit is theater on a loop.  Three actors perform the play by Jason Grote, but on repeat.  The cast alternates, with Ben Mehl, Brian Bickerstaff and Eliza Baldi playing Doug, Mitch and Viv on certain days, and Quinlan Corbett, Matthew Stadelmann and Stephanie Wright Thompson assuming the roles on other days.  One can understand the days off considering the demands of eight-hours of continuous drama.

Playing a three-character contemporary melodrama by Jason Grote, the cast remains on set throughout the duration of the performance day, eating and performing other necessary functions inside a small house that has been constructed in the Essex Market. Like voyeurs sneaking around the outside of the house, the audience follows the action from room to room by peering through windows in the house. The cast-off furniture and cheesy architecture of the small house is nicely accentuated by the Halloween decorations. The distance from audience to actors is often negligible. The actors are required to stick to the script but given freedom to change the physical action –where they are in the house, what they’re doing, who gets the bullet at the end.

Habit, previously presented and developed at The Watermill Center and Mass MoCA, partakes in a trend of endurance theater that tests the audience’s ability to watch, attend or absorb the enormity of a performance.  (In his recent book Great Lengths, theater historian Jonathan Kalb has described the fashion and pointed to its decline.)  It is no surprise that Levine spends part of his time in Germany.  The Germans are absurdly fond of theater marathons.  Levine has pushed the limits even in Berlin with his evocation of Heiner Müller’s Der Umsiedler, about a farmer in conflict in the early days of the East German socialist state.  Levine turned the play into a wordless performance by a method actor performing the labor of a potato farmer in a field outside Berlin.  Visitors were bused to the location, which they could observe on the ground or from a tower.

In Habit, the durational aspect of the work allows spectators to experience narrative in usual ways by sampling it (leaving the performance and coming back, even on a different day). It also permits a glimpse at the actors and their work: though they stay in character, the fatigue of the performance weighs on them, which seems to loop back into the plot of Grote’s play about marginalized, downtrodden, hard-partying people.