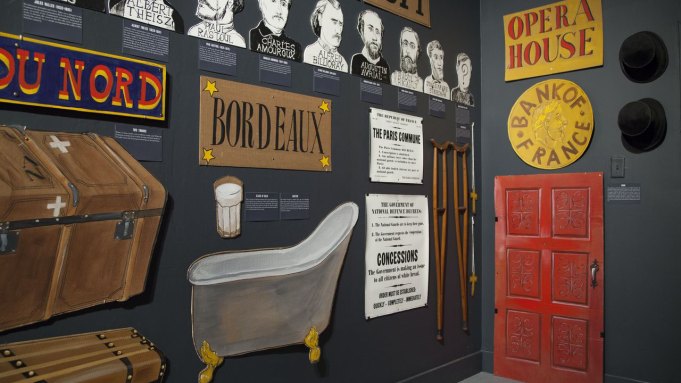 Can a series of rogue public performances with a cast of 50 translate into a compelling gallery exhibition? A dynamic show of colorful props, expressionist drawings and powerful videos of guerrilla street theater orchestrated by Zoe Beloff and currently on view at Slought Foundation in Philadelphia proves that the answer is yes.

Born in Edinburgh, Scotland, and based in New York City since 1980, Beloff earned her MFA in film production at Columbia University, and is currently a professor of media studies and art at Queens College of the City University of New York. During spring 2012, Beloff, 55, directed a series of remarkable performances of Bertolt Brecht’s 1949 play The Days of the Commune, which was set in the 1871 Paris Commune. Echoing the values at the heart of the Occupy Wall Street movement, Beloff’s production was not a single performance of the play. Rather, each weekend for three months, she, cinematographer Eric Muzzy (Beloff’s frequent collaborator) and a company of actors and musicians rehearsed one scene per day at various New York locations: in Zuccotti Park, on the grand steps of the New York Public Library, at a community garden in the East Village, and on Governors Island.

Best known for heavily researched multi-medium projects that conflate fact and fiction, such as her Coney Island Amateur Psychoanalytic Society (an installation featuring, among other things, films of dreams of the society’s members and the extensive drawings of its “founder” Albert Grass), Beloff explores utopian communities, real and imagined, discovering and producing archival material related to their histories. By e-mail and phone, she discussed with A.i.A. how, for this project, she looked back in time, through the lens of Brecht’s play, in order to promote a vision of a new, more democratic future society.

JENNIE HIRSH How did the idea for The Days of the Commune come to you?

ZOE BELOFF Spending time at the Occupy encampment in Zuccotti Park in September and October 2011, I started a series of documentary drawing simply as a way to pay attention to what was going on. I started thinking back to the drawings of Courbet and Manet, who drew the devastation at the end of the Paris Commune. This is how I first connected the two events. The Paris Commune was the first great “occupation” in modern history when the working people took over their city and formed a progressive democratic government.

I wanted to contribute artistically to Occupy, and drawing seemed too private. I wanted to make something that I could share with everyone. When I discovered Brecht’s play The Days of the Commune, I knew that I had to stage it, right away in the streets of New York. I wanted to use it to create a sketch of a yet-to-be commune.

HIRSH What was your initial relationship to the Occupy movement?

BELOFF I attended the general assembly meetings—which were actually amazing and inspirational street theater—but I never camped out.

HIRSH What appealed to you about Brecht’s text?

BELOFF Brecht does several things. He creates a great kind of pageant so that people today can learn about the Paris Commune. He shows how politics and economics can shape lived experience. Most importantly, he raises questions that are just as important now as they were in 1871. Is force ever justified? What does freedom really mean? What are its limits? Do businesses have the freedom to exploit workers? Does freedom of the press include the freedom to spread lies?

HIRSH How did you pull together the production’s participants?

BELOFF I wanted this commune to represent the diversity and openness of New York today. I advertised on the Occupy Performance Guild list serv, posted signs in downtown theaters, and invited colleagues from the City University of New York. About half the cast had acting experience; others were enthusiasts and activists.

HIRSH What were some of the challenges of this project?

BELOFF A two-and-a-half-hour play with 50 speaking parts performed in public spaces without permits was a huge challenge. But Occupy inspired me to just go for it. I realized right away that we couldn’t do the play in a conventional form all at once. Instead, I decided on a series of performances, taking one scene at a time, and calling it a public rehearsal, a rehearsal for a commune yet to come. Most people could not commit to every performance, so not only did each performer play multiple characters but many characters were also played by multiple actors.

HIRSH Can you talk about your simple yet sophisticated cardboard props?

BELOFF I made all the props myself. It was a mad rush every week to make cardboard bathtubs, dead rats, loaves of bread, and barricades. Cardboard is the language of protest. Everyone carries cardboard banners at marches. But I am also inspired by Thomas Hirschhorn, who uses cheap, everyday materials brilliantly.

HIRSH What is the relationship of your current exhibition at the Slought to The Days of the Commune project?

BELOFF Today every protest must occur in the street and online. After each performance, Eric [Muzzy] and I would upload the latest video to the website. I knew that, ultimately, I wanted to show the piece as an installation, to create a single place where someone could see the complete play. Each of the props has a story to tell and was a chance for my Occupy drawings to speak to their counterparts in the Commune. Of course what is lost is the live element, the surprise of stumbling on a group of people in red sashes singing the Internationale on the steps of the New York Public Library.

HIRSH After this project, do you see yourself moving into theater and performance?

BELOFF I like working in public, and I like cardboard, so there will be more. My current research project concerns German refugees in 1940s Los Angeles, focusing on Brecht, Hanns Eisler, Theodor Adorno and Fritz Lang. But, like the Commune, this will take place in the present day, a series of “sketches” with these historical figures reenacting moments in their lives to ask questions about what it means to be displaced, to make political and popular art, and to think critically.