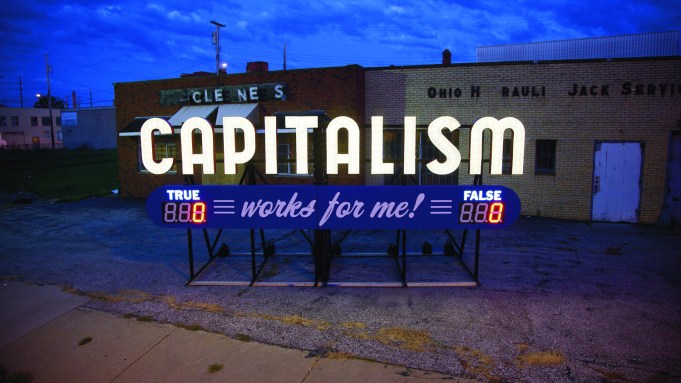 The 23 artists and collaboratives in the second DeCordova Biennial [through Apr. 22] live and work in the six original New England states, and the stated purpose of the show is to demonstrate the high level of work being made there. Co-organized by Dina Deitsch, the museum’s curator of contemporary art and Abigail Ross Goodman, former director of Boston’s Rotenberg Gallery, the show reflects economic instability and self-effacement.

One fine example of the growing trends of artistic dialogue about contemporary feelings of class division was the prescient selection of Boston-based artist Steve Lambert’s blazing sign, Capitalism Works for Me True/False, 2011. His 9-by-20-foot aluminum sign, fitted with large colored lights and parked outside the museum entrance, is an interactive project equipped with a large button which when pressed lights up tallied votes which indicate whether or not viewers consider that capitalism personally works. By 8 PM on the evening of the Jan. 20 opening, “True” was ahead by two votes. The sign, which according to Ross was created before “Occupy Wall Street,” will travel by flatbed as a truck through the surrounding neighborhoods during the course of the Biennial.

Sculpture is by far the favored medium here, in keeping with the DeCordova’s emphasis on its growing Sculpture Park. Some of the highlights include elegant limb-like wood sculptures by Boston-based Taylor Davis. For his 2010 Studio Karmen, Cambridge-based Erik Gottesman depicts through video and photography an old-fashioned portrait studio in Jordan which provides hand-painted, three-dimensional backdrops depicting, for example, a Disney World tableau, for clients. Those visitors’ numbers are dwindling due to the popularity of digital photography and Photoshop to create escapist fantasies.

Humor and extreme craftsmanship guided Providence-based Chris Taylor’s hand-blown glass sculptures, which reproduce mundane things like Styrofoam cups and bubble wrap with a delicacy and verisimilitude that elevated the throwaway objects to luxury items. Boston artist Joe Wardwell’s painting Elaborate Plans (2011) borrows the grand scale and vast landscape of the iconic 1888 painting The Last of the Buffalo, and exaggerates and loosens its distant clouds, mountains and prairies with a more painterly style. Wardwell eliminates Bierstadt’s fantastic image of an Indian spearing a buffalo in a landscape laden with the dead beasts, but overlays his composition with ghostly outlines of his titular graphic script taken from a lyric from the Door’s 1967 song “The End.” Wardwell’s take on Manifest Destiny becomes an apocalyptic warning.

In the accompanying catalogue essay co-written by Deitsch and Goodman, titled “Fakery and Failure: Art in a Time of Discomfort,” artists were placed into the following categories: Language, Failure/Fakery/Skepticism, Hybridity/Materiality, Third Wave Craft, Abstraction, and Public Performance/Participation. The handiest category was for Language-driven, which included work by Steve Lambert, Joe Wardwell, and title-driven Brattleboro Vermont photographer Jonathan Gitelson. Alternatively, general categories like Abstraction do not quite describe the painterly selection of knotted pine and dark walnut or the anthropomorphic nuances of Taylor Davis’s wood sculpture or in her text-driven painting of two rectangles bisected by the words “I can’t feel my legs.”

Deitsch told A.i.A., “thematic grouping may be counter intuitive [for such a large show], but it helps our audiences deal with the work.”