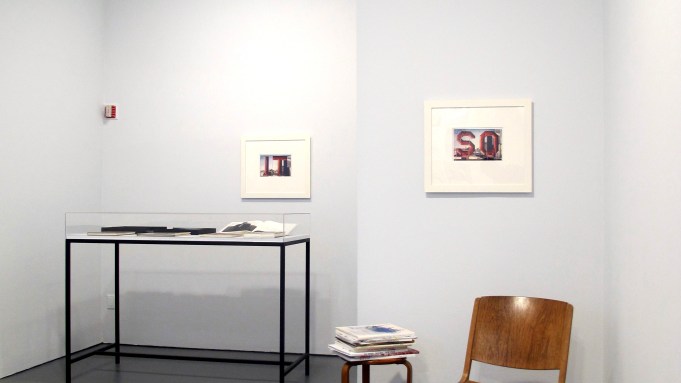 Dealer John Cheim, co-founder of New York gallery Cheim & Read, is experiencing a bit of a role reversal, as he offers an exhibition of his own work at New York nonprofit White Columns. Over the past 30-plus years, Cheim has designed more than 50 books and portfolios for artists such as Bruce Weber, Andy Warhol, Lynda Benglis, Ed Ruscha and Jean-Michel Basquiat, a selection of which are on view in “Design by John Cheim” (through Dec. 21).

The exhibition, which first appeared at London’s Institute of Contemporary Art this year, is dominated by two vitrines displaying Cheim’s early publications, as well as a video slideshow that includes images of various spreads and covers. A reading area allows visitors to sit down and page through some of the designer’s more recent books. Also featured are three color Xerox photos made by Cheim during his student years at the Rhode Island School of Design (RISD).

Although he did not formally train as a graphic designer, Cheim was drawn to the field as a youth. “My grandfather had an enormous library where I spent hours looking around as a child,” he recalled in an e-mail to A.i.A. He cites magazines such as Fortune, Life, Harper’s Bazaar and Vogue as early influences.

After graduating from RISD in 1977 with a painting BFA, Cheim interned for six months at New York’s Drawing Center, which had been founded that year by Martha Beck, former chief curator of drawings at New York’s Museum of Modern Art. He was soon hired at another new organization, the Robert Miller Gallery, then located on Fifth Avenue, where he would work for the next 20 years.

“Galleries were much smaller then,” explained Cheim. “I was in charge of gallery installation, advertising and promotion-designing all of their ads and catalogues.” He was eventually promoted to director, and was responsible for bringing artists such as Joan Mitchell and Louise Bourgeois into the gallery’s stable.

Robert Miller also represented photographer Robert Mapplethorpe, who asked Cheim to design his X and Y portfolios in the late 1970s. “As you may know, the X Portfolio [1978] became quite notorious,” Cheim pointed out offhandedly. A homoerotically charged series of black-and-white photos depicting bondage and other graphic sex acts, the portfolio, which famously features an image of a man inserting a finger into his penis, was widely denounced as obscene. A copy fetched $45,600 at Christie’s in 2005.

Cheim left Robert Miller to open Cheim & Read in 1997, where he continues to design limited edition exhibition catalogues. Throughout his career, Cheim has created publications that feature clean, elegant layouts with sparsely employed type, allowing reproductions of the artwork to take center stage. Says Cheim of his work, “It is always a pleasure collaborating with artists to help bring their art forward in the most effective way.”