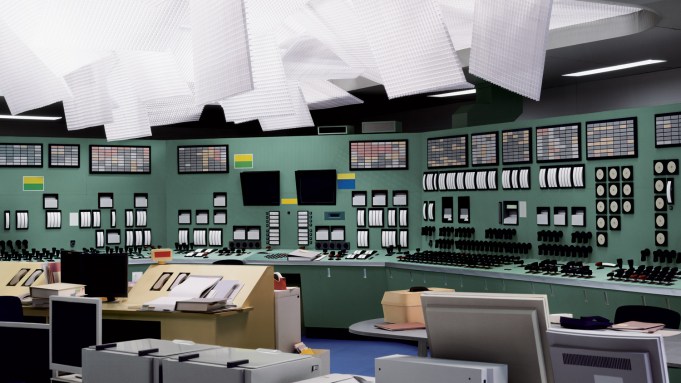 Thomas Demand, born in Munich in 1964, is peripatetic, to say the least. In a six-year period early in his career he lived in six cities. Thereafter, Berlin was his base, until he came to Los Angeles as a Getty Scholar in October 2010. He stayed in L.A. for a year in a pied-à-terre that he still rents while shuttling back and forth to the German capital. This restlessness is amazing when you consider how earthbound the production of his photographs requires the artist to be.

Working usually from a newsworthy picture he has found in the press or on the Internet, Demand reconstructs the scene in his studio-full size and in color-using stiff, coated paper that he and his assistants cut, fold, curl, bend and otherwise shape. People who were depicted in the original image are omitted. Following weeks of work building the set, Demand makes his own photograph of it with a Sinar camera. In L.A. last fall, he replicated a scene from a cell phone photograph taken in the control room of Japan’s Fukushima Daiichi nuclear power plant shortly after the 2011 tsunami hit. The work is highlighted in press materials for the artist’s show–which includes several other photographic works and a new video, Pacific Sun-opening this month at Matthew Marks Gallery in New York.

While this subject was under construction, I visited Demand’s Culver City studio in a former furniture warehouse the size of a soundstage. The movie analogy seemed appropriate, as I watched Demand welcome visitors while keeping an eye on his crew of six to eight assistants. An unshaven, soft-spoken man who talks fast but seems calm, he appeared to be in full control of the complex production in progress around him. Still, one might wonder why all this rigmarole is necessary. Couldn’t he just sit at home and do all this adaptation on a computer? The answer begins with the fact that he originally trained as a sculptor at the Kunstakademie Düsseldorf, where Bernd Becher got him interested in photographing his work. But there’s more to it than that. His artistic insight into the way media affect contemporary culture necessitates this circuitous approach.

Because Demand works from photographs that he pulls from mass media, he might be considered yet another postmodernist. However, his roots go much farther back into the history of photography. For one thing, he has destroyed every set he has created, with a single exception (the scene for Grotto, 2006). Whether he knows it or not, his habit of doing away with his subject matter once it’s photographed makes him an heir of the early photo enthusiast Oliver Wendell Holmes, Sr., whose literary fame gave his opinions on photography considerable weight. In one of his 1859 columns for the Atlantic Monthly, Holmes declared, “Give us a few negatives of a thing worth seeing . . . and that is all we want of it. Pull it down or burn it up, if you please.”1

If this preference for the image over the thing itself made Holmes a proto-postmodernist, then Demand is a post-postmodernist.2 He doesn’t share the postmodernists’ cynicism that originality is no longer possible in art, nor is he defeated by their conviction that images, or simulacra, have become the reality in which we now live, one supplanting the unique concretion of events we naively used to take for reality. Demand’s attitude toward this state of affairs is more optimistic and dexterous than theirs.3

One promise photography has always held out is its ability to preserve the appearance of what it records, so that we can discover which are the telling details and understand what tale they tell. But when Demand studies a photograph in order to re-create its subject, his goal is to eliminate detail: “The omissions are very important to me,” he avers.4 Here is where he departs from Holmes, for Demand’s destruction of the set after he’s photographed it is less significant than the deconstruction of the subject matter entailed in the way he built it.

He does this the hard way, not only reconstructing the scene at full size but often doing masses of old-fashioned research on the event that made the setting significant. He believes such research is crucial in determining the point of view his camera should take toward the scene. In order to comprehend how his photograph will neutralize the sensationalism and voyeurism invited by the original photograph, he needs to escape the loop of facile access in which the digital age traps us. “Things must be slowed down,” he has said, “and for me that involves making something with my hands.”5 He needs to wrestle, physically and mentally, with the crime, disaster or other consequential event the scene contained in order to suggest with his own picture the deadening effect that media images have on our imagination and our understanding. Another rule of thumb he follows is that “clumsiness is good. . . . The imperfectness of a work of art is beautiful.”6 He applies the somewhat surprising term “imperfectness” both to his own handcrafted, improvised process and to the finished project in which he’s worked hard to leave out so much information.

While Demand begins by removing the people from the photograph, the four technicians in breathing masks and hazmat suits aren’t all that’s missing from his Fukushima Daiichi image. So is the feedback they were feverishly reading on the screens, dials and other calibration equipment in the control room. Demand’s screens are all blank, and the clock dials have no hands on them. Blank too are the multicolored caution signs from which he has erased the Japanese characters. In fact, crucial documents that he has rendered virtually blank are a signature feature in his work—official papers scattered around the offices of the East German secret police after the regime fell (Office, 1995), all the ballots from the 2000 Florida vote recount (Poll, 2001), family photographs on a piano that are silhouettes without features (Grand Piano, 1993).

The only details in his Fukushima photograph distinguishing this control room are the diffusion grates that the tsunami has left dangling from the fluorescent lighting. They call attention to another characteristic of Demand’s work, the way that the light tends to be eerily pervasive and soothing. The slight luster of the paper components gives each scene a calm quality that’s disconcerting in pictures, like this one, where mayhem has occurred.

Both Demand and his commentators have described his photographs as having a generic quality. The squeaky-clean look of the setting and the absence of telltale detail suggest that human tragedy, as flashed to us via the Internet and news media, ceases to have any human character at all (thus his elimination of people from the scene). Fed to us in a daily dose, titillation deadens rather than excites our ability to respond. Late-breaking developments become a kind of boilerplate. In Demand’s view, the visual information glut diminishes our ability even to distinguish one event from another. As new ones replace those seen yesterday, all seem equally inconsequential. His work raises, as he puts it, “the question of whether these news reports really serve any purpose other than making us numb to the world around us.”7

Wrapping your mind around Demand’s work can sometimes be difficult because of the hall-of-mirrors quality it takes on. One of his favorite paintings is Magritte’s La Reproduction interdite (Reproduction Prohibited), 1937, in which we watch from behind as a man looks into a mirror and sees his own back. “This is a fantastic image,” Demand says, “and the formula for most of the art being created today. . . . I think this is the case with every work of art: the act of seeing is called into question, but also, at the same time, is made visible as a problem.”8

His art can present a conundrum similar to Magritte’s, as when he seems to allude to the painting-to create his own La Reproduction interdite-in a photograph called Space Simulator (2003). Demand’s mock-up of a mock space capsule used for training astronauts here on earth is seen against the rear wall of his studio-except that this is itself a mock-up of the actual wall that’s just behind it. (When Demand first exhibited this photograph in Germany, he made the effect even more confusing by displaying the image inside a replica of the gallery where it had been shown during the 2004 São Paulo Bienal.) The reverberation in this piece between the subject of the photograph and the photograph itself, as an object, compels us to try to see the image as both things at the same time. Our focus slips back and forth queasily between the subject of the space simulator and the print as simulacrum. The self-consciousness of the artist contemplating his art even as it comments on his subject matter can cause a bit of a headache, like seeing double. Or perhaps what’s at work here is just the sort of double consciousness that affects contemporary art in all mediums.

Though Demand says he’s drawn to L.A. because he likes working with the people here, I suspect it’s also because this city, steeped in the movie industry, is the World Capital of Simulacra. He has an ambivalence about L.A. that feeds the ambiguity necessary to his work. He’s definitely stimulated by the strangeness of life in the sprawling metropolis. He points out that in Berlin, one might run into friends on the street or casually agree to meet at the coffeehouse on the corner. In L.A., it takes at least a month to get together, and even then elaborate arrangements are required. The rest of the time you are in your car driving around for untold hours every day, he says, “listening to NPR, which gives you a shared experience to talk about when you finally see your friends.”9

Other L.A. experiences, however, seem less strange to him-earthquakes, for instance. While the weather in Southern California is much kinder than the humid climate of Berlin to Demand’s paper constructions, even the frequent temblors that are so slight we don’t feel them sometimes disarrange the sets under construction in his studio. In Berlin, he had a similar problem when photographs of a finished set kept coming out blurred. A sharp image wasn’t obtained until, one day, there was a work stoppage on the subway system. (His rent was cheap, he realized, because his studio sat above a station.) Because the L.A. problem has persisted, he finally got an earthquake app on his iPhone, which allows him to feel equally at home in both cities.

6 Thomas Demand in a public dialogue with Alex McDowell, tape-recorded by the author at the Art Catalogue Bookstore, Los Angeles County Museum of Art, Jan. 29, 2012.

Colin Westerbeck is a photo historian and curator living in Los Angeles.