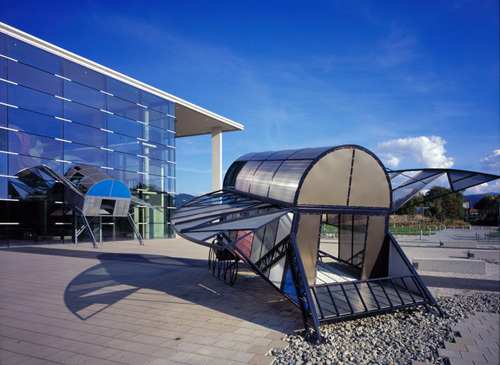 The last time I saw the conceptual artist Dennis Oppenheim, he had just dyed a portion of his hair purple. He was 71 at the time, although he was hard-pressed to admit his age. I recall celebrating his 70th birthday three years in a row.

Oppenheim worked in performance, sculpture, land and body art and video. But he is best known for public projects that incorporated complex architectural elements, like the controversial Device to Root Out Evil (1997), an upside down sculpture of a church with its steeple jutting into the ground. This commissioned work was rejected by Stanford University for its iconography, and later permanently installed in Vancouver.

Averaging five solo exhibitions a year over the last two decades, Oppenheim’s installations ranged from Chula Vista, California, to the Whitney Museum. “Resting on your laurels and simply reiterating what you already know is a waste of your life,” he once said. He died at the age of 72.

In his lifetime, Oppenheim earned reluctant recognition. He jumped from genre to genre and avoided a singular style. “I’ve always wanted to operate within the entire arena. Signature style has been suspicious to me; it reads as a limitation,” he told Sculpture Magazine.

Oppenheim’s homes in Tribeca and East Hampton—where he drove a cherry red vintage Chevrolet—were as eclectic as his output. In fall his Franklin Street loft might feature 100 kitsch pumpkin sculptures installed over the living room shelves. Though he said he never liked drinking and gave up alcohol in the 90’s, it was in his home that some of the art world’s most infamous parties were hosted.

Dealer Kenny Schachter, who mounted a retrospective-style exhibition of Oppenheim’s work in 2004, described for AiA the artist’s ragamuffin appearance: The works were all over the place too but with an undeniable magic touch, from the sunburned book impression on his chest to his wacky machines—Rube Goldberg wedded to Samuel Beckett.” He also noted “a palpable sense of optimism from the man and his art.”

Writer and friend Anthony Haden-Guest remembers him affectionately to AiA: “I loved his humor and his lively, questioning intelligence. He had a very high reputation as an artist, of course, but he was also oddly under-recognized. Not, I think, for long.”

Dennis Oppenheim died in New York on Friday night, of complications from colon cancer. He was surrounded by his family and friends.