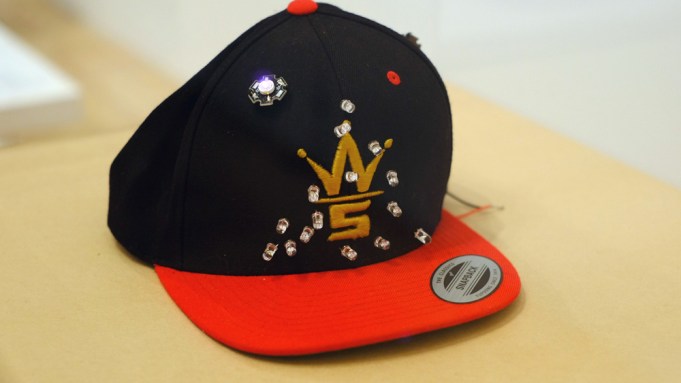 For each day of its run, “rootkits rootwork,” Devin Kenny’s solo exhibition at MoMA PS1, closes to the public for half an hour. During this time, the artist invites museum guards to interact with his works as visitors would. But unlike visitors, the guards are granted permission to peruse books from Kenny’s personal library on display.  Broadly covering racial and political subjects, with titles such as Women, Race and Class (1981) by Angela Davis and Nobody Sleeps Better Than White People (2016) by Rin Johnson, the books sit in a small three-shelf bookcase in the corner of the gallery, which also functions as a pedestal for What if? #12 (2018). This latter work consists of a police cap turned upside-down, resting on its crown. Fabricated for the artist by a supplier to the New York Police Department, the cap is identical to a real one. In a small plastic sleeve inside the cap, where an officer would usually keep photos of loved ones, Kenny has instead inserted a printed screen-grab from the body-camera footage of the horrific 2016 murder of Philando Castile by police officer Jeronimo Yanez in Falcon Heights, Minnesota. It shows a patch of sky.

Kenny takes an experimental, multidisciplinary approach to analyzing the contemporary black experience. Exploring surveillance, abuses of institutional power, and gentrification, he balances abstract concepts with material traces of once subcultural but now quite ubiquitous forms of expression such as manga, hip-hop, and internet memes. The exhibition occupies two galleries at PS1; the far wall of the larger one is lined with bandit signs, those visual annoyances with proclamations like WE BUY HOUSES FOR FAST CASH.  Such signs are often found in disenfranchised neighborhoods where people may need to sell quickly, below market value, due to the condition of the property and their immediate desperation. It is a tactic synonymous with gentrification, as the investor can make repairs and gouge prices for new economically secure buyers. Here, the signs form a row inches below the high ceiling, setting an ominous tone.

Ain’t nobody seein’ me (IR mask), 2014, rests on a pedestal in a corner under the end of the bandit sign row, protected under an acrylic vitrine. It is a fitted baseball cap covered with infrared LEDs, bearing the logo of WorldStarHipHop, a popular content-aggregating video platform that showcases black music and culture. The wall text explains that LEDs were once worn in this way to overwhelm the sensors of CCTV cameras, but camera technologies have been updated to render this hack obsolete. The negation of the minor rebellion enacted by the infrared mask may suggest a spiritual complication as those who would resist come up against two powerful forces: on one hand, the monetary power behind encroaching gentrification and surveillance, and on the other, the allure of glorified sex, violence, and material wealth in much of today’s popular hip-hop culture.

Kenny produces music and music videos as Devin KKenny, and for his 2014 album Alone We Play each track is attributed to a different pseudonym. He appears as ENIAC Rose in the video for his song “LANyards,” which plays on a wall-mounted monitor in the smaller gallery. The video shows a group of smartly dressed young people in a sunny loft space, laughing and exchanging ideas as they study a laptop screen and printouts. We’re told that they are employees of a covert ad agency that the CIA hired for a rebranding after its surveillance of US citizens’ digital activities are exposed. Starring as the project’s manager, Kenny raps with a Band-Aid on his forehead. His lyrics run at an off-kilter beat, with a quick and angular cadence. Various stock images cross the screen as part of the team’s workflow: the insignia of the NSA, the rabbit-duck optical illusion, and cyberpsychology diagrams, which map the effects on the mind of devices like phones and cameras. It looks almost like a corporate promotional video, but the music and lyrics give it a more personal and stylish sensibility. The ad agency’s mission is to limit subversive behavior using social engineering via social media and they seem to be having a lot of fun doing it.

On a metal clothing rack in the center of the second, larger gallery hangs bam bam. exclusive drip (AKA turtle power), 2019, a modified garment of durable green nylon. It is an anti-suicide smock, first used in California county jails for prisoners in solitary confinement. Using white ink, Kenny has silk-screened the garment with manga images of heroic prisoners breaking free of their bondage. The garment’s overall style alludes to global street fashion, suggesting an alternative emancipatory future for the constraining smock.

Kenny aspires to make revolutionary content. The title of his work, What would Upski think? (2018), refers to the political activist and author William Upski Wimsatt, a former graffiti tagger and author of Bomb the Suburbs (1994), an influential meditation on hip-hop, race, and urban design.  The work is a computer designed to mine cryptocurrency that goes toward the Bronx Freedom Fund, a nonprofit bail fund. Kenny belongs to the collective that created Bail Bloc, which developed a program that people can download to donate their spare computing power to generate cryptocurrency, which Bail Bloc then trades for dollars and donates to bail funds. As of this writing, Bail Bloc has raised $82,462 since its launch, enough to set forty-three people free from immigration detention. For “rootkits, rootwork,” Kenny installed the program on PS1’s network.

Introducing institutional interventions, such as giving museum guards an extra break and using the museum’s computer power to generate bail money, instills confidence that artistic gestures can directly affect people’s lives for the better. Through the use of consciousness-raising texts and evocative objects and videos, Kenny not only engages with the myriad problems that face us and our implication in them, but also, surprisingly, inspires hope as well.

Selfridges Says It’s the Summer of Sex and Sleep

RS Recommends: These Are the Best Fourth of July Sales Worth Shopping Today [Updating]