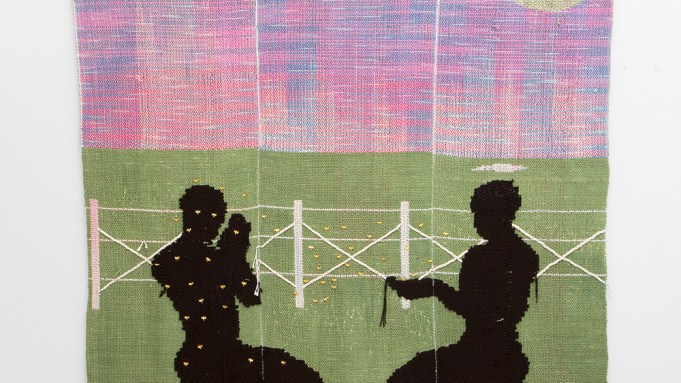 “I cry so much sometimes, I feel like I’ma turn to drops.” That’s Chiron talking, the central character of Barry Jenkins’s 2016 film, Moonlight. The line came to me while I was looking at images of Diedrick Brackens’s new weavings, which, like the movie, offer an exploration of queer black experience that is at once heartbreaking and uplifting. These recent works were meant to be shown at Jack Shainman Gallery in New York, in a solo exhibition called “blessed are the mosquitoes.” It’s now on indefinite hold, the artworks in lockdown in a Los Angeles warehouse. Which is a damn shame, because like certain other exhibitions that are currently languishing behind closed doors—the Met Breuer’s Gerhard Richter retrospective, for one—Brackens’s show is exactly the kind we all need to see right now. Intended as an exploration of one pandemic, it has come to seem emblematic of another.

When I interviewed Brackens via Zoom in April, he said that he originally thought of the works for the Shainman show as an exploration of the long-term impact of the AIDS crisis on the black community. The works center on figures rendered in black or hot-pink silhouettes, some pockmarked by dots—which could represent germs, bugs, pills, wounds, sarcomas, or even teardrops. (He took inspiration for the motif from the Nigerian-British artist Rotimi Fani-Kayode’s 1987 photograph Sonponnoi, which shows a seated black man cropped at neck and knee, his skin painted with polka dots, clutching a trio of lit candles at his crotch.) The figures are placed in simple but evocative settings, seated before a fence or floating with head thrown back near a tree, in postures that suggest some occult significance: “we all grapple with mortality through ritual,” Brackens observes, “even the least spiritual of us.” Most of his characters could be read as stand-ins for the artist himself—they have his slim build—but they are also blanks, onto which viewers may project their own narratives.

In a strange twist of fate, these works arrived in the world at about the same time as COVID-19, a disease that, like AIDS, disproportionately affects black Americans—black men most of all. Brackens could not have foreseen this crisis, of course, but it has lent even greater urgency to his central theme: in his words, “all the ways the male body fails, and also what it is capable of.” This is an investigation in the vein opened up by Thelma Golden’s influential exhibition “Black Male: Representations of Masculinity in Contemporary American Art,” which was organized at the Whitney Museum in New York—it’s hard to believe—twenty-five years ago, in 1994. Brackens was all of five years old then. He is part of the new wave of artists of color whose work has been met with at least some active encouragement, rather than a wall of obstruction. The results of this historic shift have been awesome to behold, particularly when it comes to figurative painting: consider the reverence accorded to such well-established figures as Kerry James Marshall, Kehinde Wiley, and Amy Sherald, as well as to artists of Brackens’s own generation, like Tschabalala Self and Njideka Akunyili Crosby.

Brackens’s work certainly fits within this context, as a multivalent expression of black identity. It also draws on formal precedents such as Kara Walker’s cut-paper works, the prints of the Cuban artist Belkis Ayón, and Simone Leigh’s eloquent ceramic sculptures—all of which employ silhouettes or highly stylized forms. There are a few things that set Brackens apart, though, first and most obviously, his chosen medium. While his works are certainly painterly, they are not actually painted, but rather slowly built up, weft by weft, on the loom. He first gravitated to the discipline as an undergraduate at the University of North Texas. “I walked into the weaving room and saw the machines and color-coded cabinets of yarn,” he recalls, “and thought: I have no idea what this is, but it’s amazing.” He was hooked straightaway. He loved the slow analog action of the machines, the sense that he was traveling through time, his hands and body echoing the shuttling motions of past weavers beyond counting.

Brackens then pursued an MFA degree at the California College of the Arts, studying under textile artist Josh Faught, whose works offer a candid and heartfelt exploration of queer identity. Among other things, Brackens’s period of study with Faught encouraged him simply to loosen up his process. “Out in the world,” he says, “people always flipped the weaving over to look at the back,” evaluating it primarily on the basis of rigorous technique. Now he leaned into improvisation. It helped that many of his peers at CCA were painters, who knew nothing about the materiality of textile and responded purely on the basis of imagery, palette, and composition. To this day Brackens’s embroidered lines feel like they were drawn by hand, his stray hanging threads like drips.

In the short time since Brackens graduated, in 2014, textiles have seen a tremendous upswing in ways of making and in attention paid—both to honored elders such as Anni Albers, Lenore Tawney, and Sheila Hicks, and to contemporary figures like Julia Bland, Sheila Pepe, and Faught himself. “It’s the same kind of freak-out that ceramics had a decade ago, or painting had a hundred years ago,” Brackens observes. Even amid this eruption, he has established an unusual method for his work by fusing together multiple textile idioms: figural tapestry, which is largely a European tradition; kente cloth from West Africa; and quilt making, particularly as practiced by African Americans (most famously the women of Gee’s Bend, Alabama). His primary material is hand-dyed cotton, a fiber that comes freighted with history; manipulating the threads, for him, is another way to get in touch with past generations.

Brackens’s relationship to these various medium-specific trajectories has undergone a gradual shift. In his early work, he says, “the big thing was accessing African traditions. They were the pinnacle for me: a way to tie myself to something old. I thought, if I can get close to this root, something will happen.” After his first figurative works were misconstrued by some viewers, who saw them as manifesting African American stereotypes, he turned for a while to abstraction, sometimes adding stray, suggestive text fragments that seem to have wandered off a smartphone screen. He also began to look more seriously at Southern black quilting, feeling that it was perhaps a more authentic resource for him than African textiles—he’s from Texas, after all. He added to his work passages of over-stitching and other embellishments (among them buttons, silk organza, and baskets), allowing him to break out of the matrix imposed by the loom. Even as he has returned to figuration, beginning in 2017, his compositions have retained a dynamic, asymmetrical quality.

As Brackens’s technical repertoire has deepened, so too has the resonance of his work. His repeated use of bare silhouettes, along with certain recurring motifs—catfish, horses—lend his creations an aspect of private mythology. This is redolent, once again, of Southern folk art (the celebrated quilts of Harriet Powers, for example, or the drawings of Bill Traylor) but also ancient legends. Brackens says he has been thinking recently about mythic protagonists like Orpheus and Hercules: “all-purpose heroes” whose narratives rise above the level of mere storytelling, becoming foundational to the cultural imagination.

Any artist would want to achieve that, perhaps, but Brackens has set his sights on this goal with particular focus, and this has brought a newly allegorical and portentous quality to his more recent works. Continuing his extended act of self-portraiture, demigod and break and tremble (both 2019) show a lone naked man and a mythic horse on a quest: for human connection in the face of isolation, meaning in the face of potential erasure. Even before the arrival of COVID-19, Brackens’s work seemed almost unbearably relevant to what was going on in the world. Now, viewed through the overhanging veil of plague times—at a moment when all-purpose heroism is so much in demand—it has become essential.