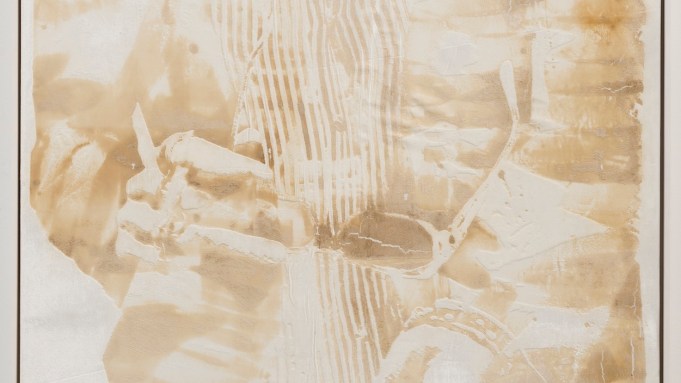 It’s hard to miss the disclaimer at the bottom of the press release for Matthew Brandt’s exhibition “Velvet and Bubble Wrap,” at M+B Gallery in West Hollywood (through Jan. 18, 2014). “Some artworks in this exhibition contain trace amounts of cocaine incorporated into the materials used and thus rendered unusable in any other context,” it begins, referring to his piece Night Sky NGC 3372 (2013).

That work, a drawing of a night skyscape, created with specks of the powder sprinkled onto black velvet, which is then put behind glass, may look like a Vija Celmins or an Ugo Rondinone portrait of the universe, but for Brandt, it alludes more to the mind-altering kitsch culture of Los Angeles. Even the wide shape of the canvas is in cinematic aspect ratio. “To grasp the idea of the universe,” Brandt told A.i.A. during a recent visit to the show, it would be helpful to have what he calls a “neurological regulator” like cocaine. The work “hints at altered perceptions, and making pictures of nebulas and stars was a way to talk about that,” he said.

Despite the loaded nature of the material, Brandt’s use of it is low-key—this is no Cocaine Buffet, the notorious Rob Pruitt sculpture consisting of a huge offering of the drug. The understated treatment is in line with the two series that make up the rest of the show and are rife with restrained references to Hollywood kitsch. The “GAP” series consists of photos of the spaces between the letters of the Hollywood sign, screen-printed on bubble wrap, and framed in a lightbox. “It makes sense in a lightbox, because you go to Sunset Boulevard and it’s all lit up,” the artist explained.

You won’t detect any of the Strip’s sleaze in Brandt’s work, though. The Hollywood sign is photographed from the back, affording the garish sign a classy abstraction. Natives tend to look at Hollywood with much less ardor than transplants. Brandt, who grew up in Los Angeles, moved to New York to study art at Cooper Union, graduating in 2004, and then returned to get an MFA from UCLA in 2008, addresses the kitsch by throwing it onto a mulch pile along with idiosyncratic materials, and  by ultimately making beautiful images of the city’s oft-derided excesses.

The most striking images in the show turn out to be the works in the front room of the gallery, a series of “Burnout” photos. The process here sees Brandt screen-printing acid onto white velvet, which allows him to scrape away the fuzzy pile of the velvet, leaving the synthetic mesh base. This process is a textile technique referred to as devoré (French for devoured). The subject matter consists of the torsos of acquaintances and colleagues (such as M+B owner Benjamin Trigano), all wearing striped shirts. “I like this idea of trying to revitalize velvet paintings, because it is a very loaded material,” said Brandt. “To make velvet works is such an obvious, kitschy, cliché thing.”

For Brandt, these velvety torsos are the artist’s version of the inhabitants of Hollywood. As for cocaine, Brandt assured A.i.A. that his studio doesn’t resemble the wild, debauched scene that might be brought to mind by the drug. “I don’t use [cocaine] excessively [as a medium],” he said. “When a little speck falls on the velvet, you can tell-it makes itself known. So, I’m not sitting around splattering cocaine all over the place. I don’t have a huge mountain that I’m working off of.”