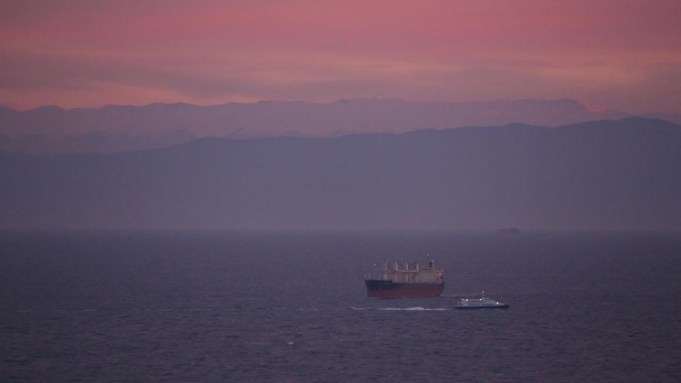 In November 2012, on a visit to New York, the Turkish novelist Orhan Pamuk purchased a Canon 5D camera from B&H on Columbus Avenue. Upon returning to his Istanbul studio, he fulfilled a lifelong dream, eagerly setting up a tripod on the balcony and aiming the telephoto lens at the city’s vistas. A sixteenth-century mosque named after Cihangir, the short-lived son of Sultan Suleiman the Magnificent, fronted his panorama. Between it and Mount Uludağ, a hundred kilometers away, Pamuk caught glimpses of the Topkapı Palace, the Golden Horn, and a stone building on the Bosphorus Strait named the Maiden’s Tower.

From December 2012 to April 2013, Pamuk took 8,500 photographs of these views: seventy photos a day, seven every hour. As he realized his photography fantasy, political tensions brewed in Turkey. They came to a head in May 2013, when millions gathered in Gezi Park and other squares to protest Turkey’s ruthless modernization. But you won’t find those activists, or any other humans (besides four women playing cards in one image), in Balkon, Pamuk’s first photography book. Instead, views of birds, clouds, hills, promontories, slopes, and ships fill the two hundred pages.

Though the photographs do not articulate any connection to the political life of the city, they nevertheless convey a mood of angst and uncertainty. Why Pamuk took them is a riddle. But the decision by Steidl, the world’s leading photography publisher, to print 568 of them does not puzzle. Balkon’s images may often be listless and unexceptional, but they also capture one of the central cruxes of Pamuk’s work: a sustained interest in distances.

Born in 1952 in Istanbul, Pamuk has authored ten novels that are built on meticulous research and known for their scholarly remove. He feels most at home in archives, researching monographs and parsing footnotes; Pamuk’s photographs, too, are those of a reclusive bookworm. He doesn’t walk the streets. Viewing Istanbul’s topography from an aloof authorial position is more to his taste. If the work of Ara Güler, the recently deceased Turkish-Armenian photojournalist whose images illustrate Pamuk’s memoir Istanbul (2001), is that of a reporter, Pamuk is more a cartographer. He prefers mapping Istanbul’s neighborhoods and waterways over capturing its street life.

But Balkon is not Pamuk’s first foray into visual art. At the 2015 Istanbul Biennial, curator Carolyn Christov-Bakargiev exhibited eight sketchbooks by Pamuk. Produced between 2008 and 2013, they featured drawings in acrylic, ballpoint, pastel, and watercolor. Pamuk’s works were intriguing but hardly enduring. One bears a close resemblance to a photograph in Balkon, offering a view of the Bosphorus as seen from the artist’s studio. A crow stands in the foreground, next to a handwritten pronouncement: “Thirty-five years ago I killed the artist in me and started writing novels.” Most will agree this was a wise decision. But the visual artist in Pamuk survived and now asks to be considered alongside the literary giant’s writings.

Cargo ships carrying colorful containers, ferries going from Asia to Europe, construction cranes working at a distant port, boats unfurling sails in the Bosphorus, Russian warships cruising next to fishing boats, and freighters making risky turns animate Balkon’s pages. In the introduction Pamuk describes ships sailing “between the minarets of Cihangir Mosque and its dome,” and how from his fixed position he has diligently recorded their movements. What he calls his sense of “duty” to preserve the view is linked to future but is rooted in his past. “I sometimes felt, especially as a child,” he writes, “that the number of ships that passed through the Bosphorus and the order in which they came were somehow my responsibility.” He also likens himself to a bureaucrat “wanting to observe and record everything that goes past his door.”

Though the pages lack captions, geographical tags, timestamps, or titles, Pamuk notes that he has chronologically ordered the images to convey slow, seasonal change. In the book’s first pages, snow covers roofs of ramshackle buildings, snowflakes fly around Cihangir Mosque’s dome and sparrows appear frozen against the chilly background. In the middle section, fog rolls down the Bosphorus and coal smoke emanates from apartments and intercontinental ferries. Toward the end, drizzles of sunlight enter the frames. A cruise ship brings tourists to Istanbul’s historic center and helicopters buzz around mosques. The last image shows sailboats against the backdrop of a sunny day. “There is something in this view which reflects my own state of mind,” Pamuk writes in the introduction, “and reveals the ineffable but profound emotions running thorough me.”

Balkon’s distance from Istanbul, one of the world’s most vibrant cities, reduces the cosmopolis to moving vessels and shifts in its weather. Pamuk in effect “itemizes” Istanbul, to use a concept recently introduced by Frederic Jameson to explain Karl Ove Knausgaard’s postmodern inability to analyze life in a new light, instead merely listing whatever comes by.

But the vantage point from where Pamuk itemizes Istanbul has its own distinct cultural legacy. He acknowledges a fascination with vedute of Antoine Ignace Melling and others who produced Istanbul cityscapes for a Western audience. Pamuk shares their privileged position. His balcony offers the kind of views “enjoyed from foreign embassies in Ottoman times.”

This rich heritage partially rescues Balkon from the fateful genre of famous writers presenting art-school assignments as their work. But it also leads to thoughts of a foggy future for Turkey. In the 2000s, giving interviews in his writing studio, Pamuk would talk to foreign guests about his support for Turkey’s membership in the European Union. But this optimism, expressed by a balcony that weds views of Istanbul’s Asian and European halves, has lately faded. Such political pessimism is not acknowledged openly in Balkon. Instead the writer retreats to his love for books, echoing Stéphane Mallarmé. “To those who ask me why I took those photographs in the first place,” Pamuk writes, “I can now safely say this: to see them in print, on paper, inside this book.”

The 30 Best Gifts for the Sports Fans in Your Life