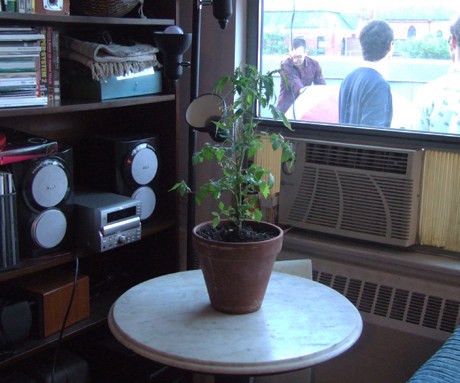 Dire reports of the financial crisis have bred a feel-good journalistic counterpart: human interest stories with a creative-response-to-the-recession twist. Arts journalism has been no exception, with tales of closing galleries piling up alongside reports of DIY ingenuity. Rather than mourn a failing commercial sector, the community newspaper hope is that artists will show their work in ways that bypass such systems entirely. What this marketing of the recession fails to acknowledge, of course, is that artists have always worked both within and without of commercial galleries and traditional non-profits. Three venues in New York that have formed in the last year—Parlour, 106 Green, and Specials—look for site flexibility, providing meaningful frameworks for viewing work outside of a commercial context by artists and curators intimately familiar with that very context.

The most senior of these projects is Parlour, a nomadic series of exhibitions within homes throughout New York’s five boroughs, conceived by curators Ciara Gilmartin and Leslie Rosa-Stumpf, who formerly worked for Deitch Projects. Parlour’s shows follow a regular schedule, with openings every other month, although each exhibition’s duration is never more than a weekend. Past shows have included established artists like Chris Johanson, alongside others for whom Parlour is a New York debut. (Full disclosure: this writer participated in Parlour no. 5, in May.) The relationship between the works in each show and the homes that serves as Parlour’s temporary locale is sometimes casual, with works hung on the walls as they might be in any living room, and sometimes explicit, as with their June show Watery Grave, in which visitors met before the opening to take the ferry to the Staten Island home of the show’s hosts. Works are installed into the space such that they appearlike domestic objects, or so viewers have to navigate an installation blockedby a bookshelf or the positioning of a couch.  Parlour’s openings are house parties as well, in which the conversations that form around the work are lent the ease of a space made for living, rather than formally displaying art. The project’s name was chosen with its historical associations in mind, which Gilmartin has described as, “a space where friends, strangers, intellectuals, artists, etc. all came together to discuss and engage with one another.” Using tropes of substitution and strategic intervention to confuse the divisions between private and public space, and the gender of those spaces, it’s a mobile Mona Hatoum exhibition for the masses.

106 Green, run by artists Ridley Howard and Mitchell Wright, is situated in Wright’s live/work space in Greenpoint. Unlike many galleries within apartments, 106 Green is comprised of a proper four white walls set apart from studios, bedrooms, and the like-offering a conventional space to view work without the restrictions such a space usually imposes.  Run by artists for artists, 106 Green has grown naturally out of a group of people already working together and like Parlour, their openings are expansive. The opening night of the inaugural exhibition, After the Gold Rush, featured a reading by poet Nellie Bridge and a performance by Brad Kahlhamer’s band Parlor Grand, in addition to works by Holly Coulis, Anke Weyer, among others. 106 Green’s fall lineup includes shows curated by Kanishka Raja and Ryan Steadman, both artists, and Nicole Russo, a director at Leo Koenig.

Specials, a collaboration between artists Lisa Sigal and Paul Ramírez Jonas, shares Parlour’s itinerant nature, while fusing together something far more unlikely than a painting and a living room. Specials is a taco stand, with each show introducing both new works and new tacos in a spirit of multi-tasking that Ramírez Jonas and Sigal describe as serving ends formal, social, and culinary.  The pair serves tacos while the audience casually moves between dinning and viewing.  The participatory nature of this exchange is shared by many of Ramírez Jonas’ performance-basedworks, while the structure of the stand itself-two pieces of sheetrock on wheels, with one side a blank white space for the exhibited works and the other festooned with chalkboards, metal shelves and colorful slabs of paint-allude to the painted constructions and precarious architectural fragments that comprise Sigal’s work. The project’s most recent incarnation was hosted at Cabinet Magazine’s project space, and presented works by Allan McCollum and Dave McKenzie, alongside a black bean, plantain, and korean pickled daikon taco.