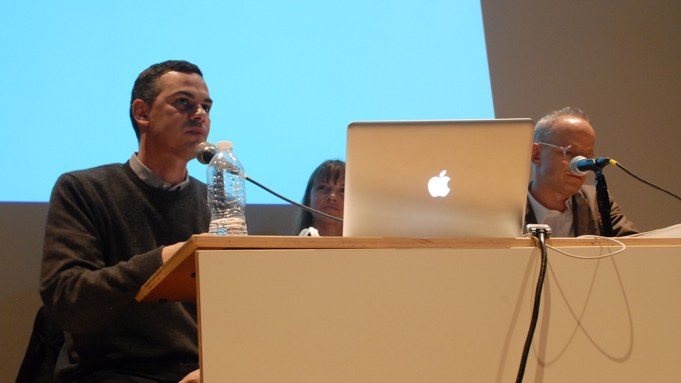 Was 1993 a moment? The question structured last Saturday’s conversation between curators Massimiliano Gioni and Hans Ulrich Obrist, moderated by Kate Fowle, curator at Moscow’s Garage Center for Contemporary Culture. Obrist’s ongoing project, “do it,” begun during the year in question over casual conversation in a Montparnasse café, was the occasion for the exchange, held in the basement auditorium of New York’s New Museum. An offhand comment by Richard Hamilton (“We mainly remember exhibitions that invent new rules of the game”) motivated Obrist and two artist friends, Christian Boltanski and Bertrand Lavier, to rethink a format vitiated by two-plus decades of institutional critique. The result is an accumulating compendium of DIY instructions, each penned by an artist, which exists as an exhibition with or without a venue to house it. To date, nearly 400 artists have authored instructions that have been enacted in some four dozen institutions worldwide.

The New Museum’s survey, “NYC 1993,” furnished the discussion’s broader frame. Curated by Gioni and three of his colleagues, the show distills one particularly decisive (and divisive) year in the New York art world. Its fulcrum was the Whitney Biennial, a constellation of urgent, socially conscious work then lambasted as patronizing, didactic and historically uninformed (“It’s Called Art, Not Politics” one review was headlined). “NYC 1993” rehashes the Biennial’s argument, since recuperated by many critics, by positioning its installation-heavy effort as equal parts art and historical cipher.

Staged in 1994 at the Kunsthalle Ritter in Klagenfurt, Austria, the inaugural edition of “do it” coalesced rapidly: “really, by chance,” Obrist opined. Mike Kelley, Felix Gonzalez-Torres and 11 other artists participated. (Gonzalez-Torres offered one of his iconic candy spills; as his untitled piece enjoined, “Get 180 lbs. of local wrapped candy and drop in a corner.”) Translated and packed in a diplomatic suitcase, “do it” traveled to 15 countries in the next five years. “It was a form of infiltration,” Obrist said. “Little by little, these shows started to pop up.”

Yet, to hear Obrist tell it, “do it” was less a product of the ’90s than of the ’60s. Yoko Ono’s 1961 “instruction paintings,” Seth Siegelaub’s 1968 book-bound installation of documentation and drawings by Douglas Huebler, Lawrence Weiner’s late-’60s Statements, and Harald Szeemann’s landmark survey, “When Attitudes Become Form,” were all floated as precedents. A series of linguistic propositions that may or may not be realized, “do it” rhymes with Conceptual art’s ideational logics, to a tee. Pressed by Fowle, Obrist pushed further back, citing Moholy-Nagy’s telephone paintings and Duchamp’s Unhappy Readymade of 1919 as early examples of art-by-instruction. Thus situated, “do it” seemed better conceived as a retrofitting of old rules than an invention of new ones. Read against the messy, bodily overflow on view in the New Museum’s upper galleries, its dry, dematerialized framework felt somewhat out of sync.

Viewed from a different tack, “do it”‘s platform is uniquely tailored to its time. As Gioni suggested, its emergence in the early ’90s attests to the renewed currency of erstwhile avant-garde strategies for artists and curators weary of the bigness and bombast of the ’80s. The decade’s turn brought the market’s bust, causing the art world to embrace what Gioni identified, with a well-tread term, as “recessional aesthetics.” Lacking funds for high production costs and salable works (all realized propositions were to be destroyed upon each installation’s close), “do it” fit with the downturn. Its ready translatability into far-removed contexts-no objects to be shipped, no insurance premiums to be covered-dovetailed with the art world’s “ever-increased polyphony of centers,” as Obrist phrased it.

Corporate imperatives quickly deflated idealistic visions of an artistic community unhindered by national bounds. As Gioni recalled, the potentially utopian models of Dada and Surrealism emptied, by 1993, into Benetton ads and crisis at the United Nations. Tellingly, Obrist noted, the title “do it” alludes both to Nike’s ubiquitous slogan and then-radical Jerry Rubin’s 1970 call for revolution. Such irresolution between the mainstream and the underground was, for Gioni, the defining dialectic of the early ’90s. He painted the New York of 1993 as a sort of terminal bohemia: “The last time,” in his words, “you could be experimental and still make it big.”

Testing Obrist with what he dubbed “the Claire Bishop argument,” Gioni wondered how “do it” might be complicit with troubled models of art world globalization: the biennial that eschews local context for the moment’s most marketable artists, for instance. Obrist rejoined by stressing the singularity and site specificity of each of the exhibition’s iterations. While most exhibitions are staged once or twice before dissolving, “do it” comprises “a repertoire, almost like an opera or a theater piece,” Obrist said. Each time it’s replayed, its repetition insists on its difference.

In the end, 20 years isn’t much time to look back on. But the shifts since then, Gioni implied, have been marked, and maybe not for the better. “What is to be done” now seems a more fitting title for Obrist’s exhibition-in-progress, Gioni quipped. “Like Mario Merz said,” he concluded, “Che fare?“