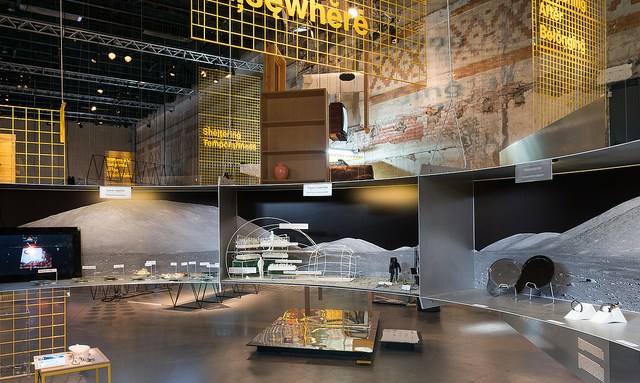 “After Belonging,” the title and theme of the current edition of the Oslo Architecture Triennale, explores contemporary conditions of domestic life, questioning the notion of fixed residence and location-based identities. Migration and refugees, house sharing, intergenerational living, homelessness, and climate change-induced displacement are some of the subjects that “After Belonging” investigates. But dislocation proves to be a tricky subject for architecture, a field largely based in rootedness and place.

The exhibition, which is on view through November 27, is split into two parts shown in two venues: “On Residence,” at the Norwegian Centre for Design and Architecture, a former warehouse space that now houses dark galleries with exposed brick walls and concrete floors; and “In Residence,” at the stately National Museum of Architecture. “On Residence” takes on large, global themes, seeking to establish various contemporary modes of living and the conditions that create those modes, while “In Residence” is somewhat more narrowly defined by projects attached to specific sites or local conditions. There is hardly a building—or a design proposal—in sight at either venue, an increasingly common and puzzling occurrence in architecture exhibitions. Instead there are walls and walls of texts, pamphlets, subtitled videos, and indecipherable maps. “On Residence” is particularly hard to understand without careful reading of dense and lengthy explanatory texts.

A German collective called the Center for Political Beauty has exhumed a number of dead migrants, identified their families in Germany, and helped to rebury them in marked graves. Their documentation of the events, The Dead Are Coming, is one of the darkest of a number of projects that dealt with refugees and migration. A pair of furniture-based projects provide a bit of levity to “On Residence.” In Found, Oslo-based Superunion Architects suspends dozens of pieces of furniture from the ceiling. At first glance it looks like a high-end showroom installation, but the accompanying text reveals that all of the pieces were acquired on finn.no, Norway’s version of Craigslist, for free in a single day in Oslo. The installation vividly illustrates the lack of permanence attached to the objects around us. Home Back Home, by Madrid-based Enorme Studio + PKMN Architectures, addresses the phenomenon of adult children returning to their parents’ homes due to poor job prospects and high housing costs by offering thoughtful ways of redesigning their childhood bedrooms for their mature lives, represented through drawings, photographs, and videos.

At the National Museum of Architecture, Emeka Ogboh has created a lounge with a large television showing televangelist sermons that are popular in her native Nigeria, especially among Charismatic Pentecostal believers. The project, called Technoreligious Communities, suggests that physical churches—in storefronts or in grand structures—may soon become outmoded, at least for some media-savvy sects. Ila Beka and Louise Lemoine’s Selling Dreams featured a video of AirBnB hosts explaining how they use staged photos to create false identities in order to make their homestay guests feel like they’re having a more “authentic” travel experience. Both projects intrigue and amuse, but should they be considered architecture?

The Olso Architecture Triennale, founded in 2000, bills itself as “the Nordic region’s biggest architecture festival,” an event that “builds networks, engages and inspires debate among professionals, business communities, decision makers and the public across borders, social layers, sectors and professions.” It has become a stop on a new calendar of periodic exhibitions of architecture and design that includes events in Chicago, Hong Kong/Shenzhen, Istanbul, Lisbon, London, São Paulo, and Venice, many of which are attended by a cadre of young curators, critics, and academically inclined designers. This global tribe on its global tour seems uniquely attuned to some of the concerns of “After Belonging,” particularly house sharing and possession swapping. The familiarity and ubiquity of these conditions, however, masks some of the horror of the other topics included in the triennial. The subject of forced migration from war-torn lands should not and does not sit comfortably next to speculations about identity and AirBnB.