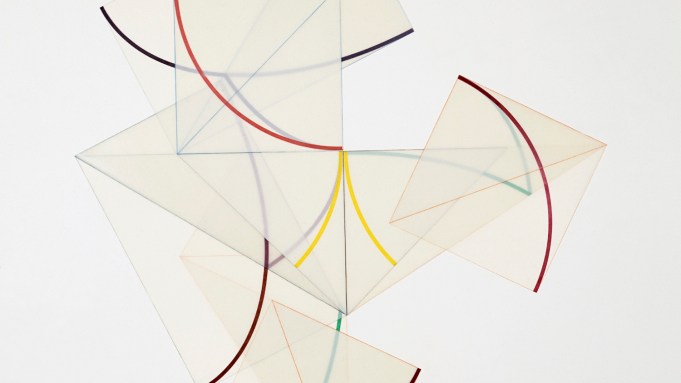 When Dorothea Rockburne, currently the subject of a retrospective at the Parrish Art Museum in Southampton, first began making her paintings and works on paper in the 1950s, she never thought that her work would be shown in an exhibition context, both because she was a woman, and because her mathematics-inspired paintings didn’t fit neatly into Abstract Expressionism or subsequently Minimalism. “The few women who were shown in the ’50s and early ’60s, like Joan Mitchell, were making very aggressive work. Not that they shouldn’t have been—it’s just that being muscular is not my personality,” she explained to A.i.A. in her cavernous SoHo studio. “I thought I could never show my work. In a way, it was liberating, because I knew I could do anything I wanted.”

Her assumptions, of course, proved to be false. Rockburne not only exhibited, but she did so widely—including, in 1981, at MoMA. “When the big museums and galleries first started showing female artists in the late ‘60s, they were looking for female artists with formed work. I was there right at the beginning of the feminist art movement.”

Walking through the exhibition at the Parrish is like stepping into a rich vault of knowledge manifested in paintings, sculptures, installations and drawings. Ripe with disparate references-to esoteric mathematical and scientific theories, as well as to Greek mythology, Egyptian history, Renaissance art history, and philosophers such as the French theorist Blaise Pascal—the exhibition spans the scope of Rockburne’s 40-year career. Rather than being organized chronologically, the works in the exhibition are arranged in pockets according to the theories, techniques, materialsthat the incredibly learned Rockburne, an avid consumer of history, has been experimenting with for years.

The first piece that the viewer encounters is Mozart and Mozart Upsidedown and Backwards (1985-87), a large-scale oil painting on folded gessoed linen that is displayed on an indigo wall, a hanging that replicates Rockburne’s studio at the time she made the work. Inspired by Mannerism and the philosophies of Pascal, the installation recreates the experiences that Rockburne had walking through Catholic churches in Europe, lending an air of heavy mysticism to the room that lingers throughout the exhibition. The work itself, which extends 4 feet from the wall, thereby creating a layered surface that challenges the flatness of the medium of painting, is inspired by topology, a concept that Rockburne learned about from the mathematician Max Dehn,  while she was studying at the Black Mountain School in the early 1950s.

Complex mathematical theories are further explored in Rockburne’s “Golden Section Paintings,” which experiment with what the artist describes as “transparency,” a viewpoint that deviates from the classic three-point perspective found in Renaissance paintings. “I realized that paint is a continuous surface, one that is layered. It’s in these works from the 1970s and 1980s that I first developed the concept of the painting looking through itself, at itself.”

Other works in the exhibition include Scalar (1971), a chip board, crude oil, paper and nail wall installation that is on loan from the MoMA, and was inspired by the tightly carved and fit together stone walls Rockburne observed at the ruins of Sacsayhuamán outside of Cusco, Peru, and the “Memory of Light in Egypt” series, which features watercolor and gold-leaf drawings on papyrus paper, a material that references not only the ancient civilization, but also Pontormo and Matisse. Like most of the works in the show, the pieces are heavily imbued with esoteric references that, when combined together, form works that are indelibly marked with Rockburne’s geometric forms and signature layered perspective. “I’ve always been interested in historicity,” Rockburne explained as she walked me around a miniature model of the installation. “I’m interested in looking back, and looking forward at the same time. I don’t want to create a revolution. I’m interested in absorbing all of history, putting it in the ‘Cuisinart,’ and coming out with a forward advance.

Rockburne describes the process of creating successful works, as represented in the retrospective, as a system of trial and error. “I knew I didn’t want to do landscape or figurative painting, and I knew I didn’t want to be a third generation Abstract Expressionist,” she told me. “It took a long time to find a way to apply the creativity of mathematics to painting. There was a lot of mediocre, or purposefully bad painting in between.”

It is only recently, with her latest work, including “Astronomy Drawings” from 2009–2010, and her watercolor painting on Dura-Lar, that Rockburne truly feels as though she can physically express the complex theories that she has been wrestling with throughout her career. “It’s always been baby steps. But lately, I’m finding ways to explore concepts like reflection and gluing, which are used to define topology,” she said of the celestial sequences and watercolors she is currently creating. “I’m just at the very beginning of a more sophisticated practice.” She then added: “The retrospective has been great, but I’m looking forward to getting back to the studio.”