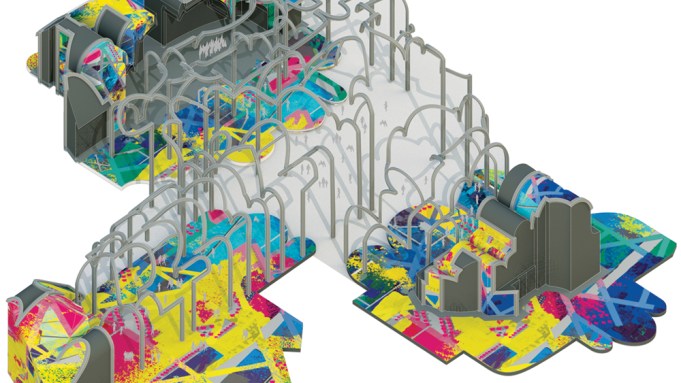 The curators of the US Pavilion at the Venice Architecture Biennale have tackled the thorny and fashionable subject of the future of Detroit. The show, which opened Saturday and runs through November 27, is called “The Architectural Imagination” and it aligns with the overall theme of Biennale, “Reporting from the Front.” The main exhibition features architects from around the world—many of them little known—who engage with a variety of social, political, and environmental concerns.

Curators Cynthia Davidson, editor of the journal Log, and Monica Ponce de Leon, the dean of architecture at Princeton University, asked twelve teams of architects to propose speculative projects for four sites in the Motor City. Considering that Detroit has recently come out of bankruptcy and is still looking for a long-term strategy for stabilization, the curators took a risky move that ultimately proved to be a refreshing and relevant one.

With a dwindling population, high crime, untold acres of abandoned land, and enough empty buildings to fill a midsize American City, Detroit is emblematic of postindustrial urban decline. Philadelphia, New Orleans, Chicago, and other cities have been haunted by comparisons to Detroit. And yet Detroit is not just an abstraction. It is a real place with real problems that impact the people who call the city home.

For Davidson and Ponce de Leon, the way to counteract the nightmare scenario is to dream. They argue that the city is on the cusp of major change as it moves past bankruptcy and government restructuring. “‘The Architectural Imagination’ introduces speculative architectural projects into the mix as a way to spark the collective imagination, to launch conversations about design, and to position Detroit as a model postindustrial city, one that is more equitable and prosperous in entirely new ways,” Davidson writes in the exhibition catalogue.

Participants were selected through an open call, and sites were chosen with the help of a Detroit-based advisory board. They presented their projects through models, renderings, collages, and virtual reality stations in the U-shaped beaux arts US Pavilion.

The projects include “The New Zacalo” for Mexicantown by Pita & Bloom, which calls for a new elevated plaza with parking underneath topped with colorful patterned paving and arched pergolas. It would create a much-needed public space for this vibrant and growing section of the city. Buildings containing a theater, retail stores, and health clinics edge the plaza and link it to street level. Other spaces, like a band shell, allow for flexible programming and community use.

Rather than presenting a design a building or a complex, Mark Scogin Merrill Elam Architects surveyed the neighborhood and created a collage of cultural influences in the area, which they titled a “Liminal Blur.” The result, however, is incomprehensible. The archispeak title doesn’t help.

Several projects repurpose existing buildings or sites, like BairBalliet’s “The Next Port of Call,” which scoops out sections of or adds volumes to the monolithic old George W. Young Post Office building along the Detroit River to create new spaces for light manufacturing and business incubators. In “Detroit Rock City: An Urban Geology,” Stan Allen, Hans Tursack, Okki Berendschot, and Liam Turkle envision the abandoned Packard Plant, one of the city’s greatest ruined industrial relics, as a city within the city. A botanical garden, residences, offices and other facilities are carved from or layered onto the concrete frame of the hundred-acre former factory.

A group of artists, activists, and architects called Detroit Resists have banded together to protest “The Architectural Imagination” with a digital “occupation,” using a smartphone app to layer alternative images and slogans onto photographs of the pavilion, which are then posted to social media with the hashtag #detroitresists. The group argues that because the works in the pavilion cannot necessarily foster change, they are complicit in the “ongoing destruction of the city” through “austerity politics.”

The activists seem to overlook the fact that architects rarely have the power to get things built on their own. The political potential of “The Architectural Imagination” lies in its suggestions of new possibilities that could inspire governments, community groups, and developers to activate the city in unconventional ways. In the end, a city that has been through so much deserves to be the site of dreams.