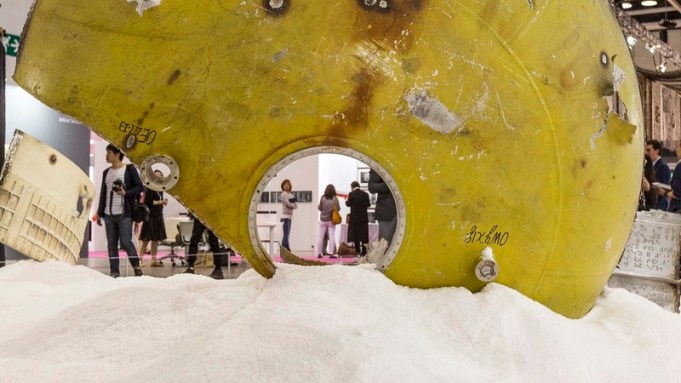 The commissioned showpiece for Art Basel Hong Kong (May 15-18) was German artist Carsten Nicolai’s sound and light work Alpha Pulse, which throbbed nightly up and down the facade of the city’s tallest skyscraper, the 118-story International Commerce Center. Scientifically calculated, the artist says, to produce a feel-good alpha wave effect, the spectacle was a perfect expression of what might be called the ABHK Syndrome—a heady fusion of globalism, commerce and glitz. A smartphone app even enabled viewers to privatize the sensation by tuning in to the light pulsation and its accompanying electronic beats.

There was a slight “coals to Newcastle” element to this high-tech exercise, given that Hong Kong’s Victoria Harbor is lined every night with dazzlingly illuminated towers, sometimes jazzed up with laser shows. On the Chinese mainland, meanwhile, Shanghai’s Huangpu River blazes regularly with Vegas-style lights along the Bund.

But maybe that visual redundancy was exactly the point. One could not ask for a clearer, brighter metaphor for the fact that East and West are now joined in a tranced-out celebration of wealth, consumerism and superficiality. This was, after all, the week in which astonishing new records were set at the modern and contemporary auctions in New York. The art press dutifully reported this phenomenon with shock and awe, while neglecting to ask how so much excess cash ended up in the hands of so few, at what cost to the world’s exploited majority.

These events promote another discomfiting question. Given that 26 percent of all high net worth individuals—the only people who can significantly stoke art fairs and auctions—now reside in the Asia Pacific region, what lies behind Hong Kong’s soaring structures and multi-kilowatt surfaces? Are the Asian streets paved with gold, as the sudden influx of so many Western auction houses (Sotheby’s, Christie’s) and galleries (Ben Brown, Pace, White Cube, Gagosian, Galerie Perrotin, Lehmann Maupin, Simon Lee, Axel Vervoordt) would suggest?

Well, a few hundred yards beyond the waterfront skyscrapers and the fair’s sleek Hong Kong Convention and Exhibition Center is Lockhart Road, thronged with cheap bars and chatty young hookers. To the west, one finds the Sheung Wan area, home to Para Site, a tiny, perpetually struggling, internationally respected alternative space. A short way east, the run-down Chai Wan district hosts emerging artists in a manner reminiscent of the Bushwick section of Brooklyn. During the fair, it was the scene of a feisty art and design festival organized by the galleries 10 Chancery Lane (Hong Kong) and Platform China (Beijing), involving 40 spaces, 60 artists and a sweltering dancelike performance orchestrated by New York artist Ryan McNamara.

Across the bay, a $2.9-billion arts complex is arising on a landfill. The two stark, angled slabs of the long-awaited M+ museum of visual culture, designed by Herzog & de Meuron, will contrast sharply with the old higgledy-piggledy mixed-use Kowloon neighborhood, which once included the world’s most densely populated block. Farther on, in the New Territories, the light-industrial area of Fo Tan houses numerous artists’ studios of the urban pioneering variety.

One of the ABHK’s many panel discussions (“The Global Art World: Making Biennials” with mega-curators Hou Hanru, Jessica Morgan, Juliana Engberg and Eungie Joo) noted that art fairs are more and more usurping the critical role of biennials. So one can legitimately ask whether Art Basel Hong Kong itself took social inequities directly into account. Did it provide any work that did not serve simply to distract and deny, and thereby coddle potential buyers?

Yes, thankfully, some. Presented by Experimenter gallery from Kolkata (Calcutta), Nadia Kaabi-Linke (b. 1978)—a Tunis-born, Berlin-based artist with a PhD from the Sorbonne—won the $25,000 Discoveries Prize with subtle, formally elegant works that allude to confinement, including metal floor strips outlining the minimal dimensions of a prison cell and glass panels bearing the impressions of wounds inflicted on female victims of domestic violence.

China’s Shen Shaomin displayed, on heaps of salt, the battered segments of a fallen rocket’s casing, its interior surfaces embossed with Braille passages from the apocalyptic Book of Revelation. His countryman, Sun Xun, offered an elaborate installation of flags, suitcases, desks, application forms and live clerks, all implicitly protesting the hellishness of seeking foreign visas and citizenship. These were among the score of large-scale Encounters projects selected by Yuko Hasegawa, chief curator of the Museum of Contemporary Art, Tokyo, and given prominent mid-aisle placement on the fair’s two cavernous floors.

But the most sobering work of all was made by Thailand’s Jakkai Siributr: a small, scaffolding-and-black-cloth version of the Holy Ka’ba in Mecca, with 78 numbered white tunics draped on tiered bed platforms, each just large enough to hold—theoretically—an adult body curled in the fetal position. The piece, so stately and subdued as to be easily passed by unnoticed, commemorates the Oct. 25, 2004, death in Thai police custody of 78 men suspected of being Islamic terrorists or their supporters.

Such works, and the dealers brave enough to present them, help make Hong Kong, and the Art Basel fair, something a little more substantial—something darker and truer—than what it otherwise might be: an artsy Potemkin village on the South China Sea.